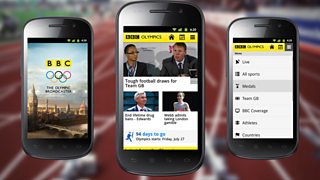 Last month I wrote on this blog about the new mobile video services we've developed to help you enjoy the summer of sport - including live and catch-up video on your mobile and tablet.

My team, the mobile sport and 2012 team, has been using your feedback on our Euro 2012, F1 and Wimbledon coverage to continue improving the service, working on the video quality and reliability of playback.

And as we build up to the Olympic Games, I'm excited to be able to announce the release of our next new BBC Sport mobile product - the BBC Olympics smartphone app.

It's available on Android and iPhone, and we are introducing a shortcut for Blackberry devices too.

BBC Future Media's Mobile Platforms team, based alongside us at Mediacity UK in Salford, built the app.

We've taken advantage of the extra functionality available in native apps to include some additional features.

In both the iOS and Android versions you can download the latest stories to read offline - perfect for when you're on the go and in an area where there's poor mobile reception.

If you want to manage your data allowance, this can be switched off (say, on 3G), or set to take headlines without images.

The iOS app is designed for iPhones and iPod touch devices on iOS 5.0 and above. Users can personalise the iOS app, by adding their favourite Olympics sports to the customisable tab bar.

The Android app is for handsets with OS 2.2 and above. Android users need to have Flash installed to be able to watch the video.

You can see a demonstration of the app's main features in the video. Some of its content (such as medals, live video and results) won't be available until the Games start but there's plenty of news and information available now.

Please do download the new BBC Olympics app and let me know what you think.