Every year at the beginning of December a group of golf journalists are invited to lunch by the European Tour and we are expected to sing for our sustenance by deciding the Tour's Golfer of the Year.

It is always a convivial gathering, spiced by lively debate stirring memories of the fine golf we have witnessed over the previous 11 months, but more often than not the decision-making process is completed somewhere between the starter and the main course.

The swift selection process is not a dereliction of duty, it is simply that one outstanding candidate invariably emerges from the discussion. Indeed, there is often no need for any chat at all as it is immediately obvious to whom the accolade should go and we can raise a glass to the winner with a clear conscience.

It didn't take too long to nominate Lee Westwood last year and Padraig Harrington was the obvious choice in 2008 and 2007. But this time? Well, let's just hope the cheeseboard is well stocked because we may be arguing for quite some time.

There is very little to choose between the two outstanding candidates, Graeme McDowell and Martin Kaymer. 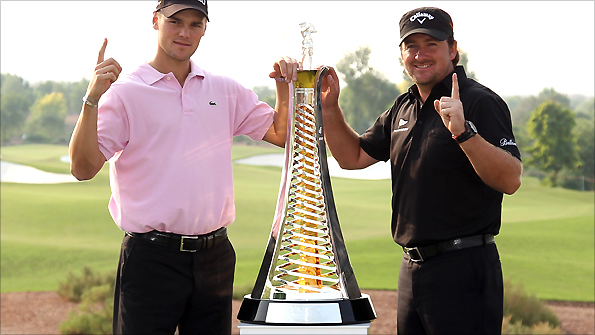 Kaymer and McDowell both want to end the year as Europe's number one - photo: Getty

Both have won majors in the United States, while Kaymer has won three other titles compared to McDowell's two. That would seem to give the edge to the German, who leads the Race to Dubai heading into this week's final event, the Dubai World Championship.

But that doesn't take account of the extraordinary role McDowell played in the final match of the Ryder Cup, holding his nerve against Hunter Mahan to win the trophy for Europe.

For my money those achievements are enough to mark out McDowell as the outstanding UK sports personality of 2010 - OK, I admit I am biased - but are they enough to make the US Open champion Europe's Golfer of the Year?

It is an extraordinarily tough call but one that might become a little easier if either of the two finishes the season in style in Dubai.

Kaymer won his first major with victory at the USPGA Championship in August but has called this the biggest week of his career as winning the Race to Dubai was his stated ambition at the start of the year.

Only McDowell can deny him the title. The Northern Ireland man is 290, 911 Euros behind heading into this big-money event and needs a top-three finish to have any chance of pipping his rival.

For that to happen, McDowell will need to sustain and improve on the form that gave him a third-placed finish in Singapore and fifth in Hong Kong in the last two weeks.

Kaymer, on the other hand, took last week off and said he has never slept as well given the exhausting nature of his stellar season. He's raring to go and keen to finish the job over the coming days.

It was another massive boost for the European Tour when Kaymer confirmed he will not be taking up PGA Tour membership next season. The implication is that his chosen tour is every bit as strong as its American counterpart.

Already the PGA Tour has felt the need to slightly alter its eligibility rules for players leaving them, which means Westwood will be able to play the US events that he wants to compete in next year.

The world number one will be allowed to accept three tournament invitations on top of the four majors, three World Golf Championships and the Players' Championship. Until this tweak Westwood was facing a choice between having to miss either the Players or defending the title he won in Memphis this year.

The change in rules shows how the PGA Tour is having to bend to the current power shift in the world game and benefits Rory McIlroy, who is not renewing his membership Stateside.

There are no such restrictions on Kaymer because he has never been a PGA Tour member, so isn't liable to the rules put in place to deter players from turning their backs on membership as McIlroy is doing next year.

All of which is fine news for the European Tour as it readies itself to unveil its 2011 calendar. There are plenty of issues to be resolved with sponsorship of the Irish Open again high on the agenda. There's also the likelihood of the Scottish Open heading north to Castle Stuart and a later end to the season with the Dubai World Championship switching to a December date.

That, though, is for next year. There's still plenty to be decided in 2010, which should provide for a fascinating finale before what is sure to be a lengthy lunch to decide the Europe's player of the year.