The ticker runs without interruption on the big screen in the media centre. Sandwiched between footage of past Masters glories a message to reporters slides across the screen and confirms the preoccupation of the first major of the year.

"If you are confirmed for Monday's 1400 (1900 BST) interview, please register at reception," reads the instruction to journalists nominated to attend.

No mention of who will be appearing at the news conference because there is no need to trail who will be showing up. Furthermore to do so would suggest the interview is something more than the Masters. The Tournament would never want to admit to that.

But Tiger Woods' first sustained public questioning since his scandal ridden fall from grace is the reason why the Augusta National has needed to take the unprecedented step of making his news conference an all-ticket affair. 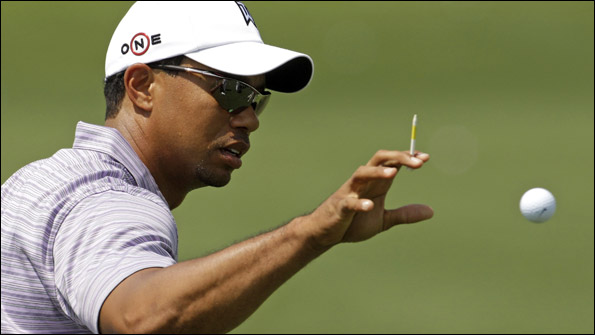 Woods made a surprise appearance at Augusta on Sunday - photo: AP

Inside the grounds of the Augusta National it feels no different than previous years. That is apart from when the ripple of whispers went round as word reached us that Woods had joined his pal Mark O'Meara on the tenth tee early on Sunday afternoon.

The reason it feels the same is because it is the usual suspects who occupy the seats in the auditorium that serves as Augusta's media centre. When news broke of Woods return here no extra provision was made to accommodate the extra interest he would generate.

No news organisations could accredit extra staff or change personnel, regardless of the fact that the event would attract interest beyond its usual constituency.

So the satellite trucks of the TV stations who don't regularly attend are parked on the other side of the road, while the tabloid websites so infatuated with the Woods story over the last four months are left to scalp for tickets to gain access to the course.

Rumours abound that these celebrity scandal sites are trying to provide a route into the Augusta National for one or more of Woods's extra marital liaisons. Guards are on alert to make sure this remains about the Masters and not the mistresses.

Woods, meanwhile, can expect some pretty hostile questioning during his news conference. Before his world fell apart his dealings with the golfing press had been deteriorating as he provided the blandest of fare with his often dismissive answers.

The week before he won the Australian Masters in November last year he played the WGC Champions event in Shanghai. In one of his early rounds he picked up a birdie after fluffing a sand wedge to the green and then chipping in from a very improbable lie.

One of the game's most experienced writers, Lewine Mair, who is well known to Woods, politely asked him to describe what happened on that hole. "Drive and then sand wedge and then chipped in," came the monosyllabic reply.

That's how bad it was getting; little did we know what was going to unfold within three weeks. Maybe the pressure of Woods's double life was manifesting itself in his testy relationship with the media.

Reporters won't be seeking some kind of revenge when they quiz him here. They will be seeking an insight into the the man who is currently sport's most famous and infamous figure.

Expect relatively few questions about his private life - none of our business anyway - and we're more than aware that enlightening answers will not be forthcoming.

But there will be rigorous quizzing on his relationship with the controversial Canadian doctor Anthony Galea and on the allegations of some kind of dependence on pain killers.

Woods will be expected to provide answers on these subjects because they go to the heart of modern day sport and because he was such a vocal supporter of drug testing being introduced in golf.

The world number one has vowed to "be more respectful of the game" and it will be interesting to note his tone in the interview room.

I won't be in there having turned down the offer of a ticket. The reason is purely logistical as I'll be in my usual seat at the back of the media centre introducing the news conference as it is aired live on 5Live at 1900 BST.

Thankfully it has been scheduled for the start of the week. It provides a focal point that generates huge interest in the game but by Thursday the golf will be doing the talking and that ticker will be scrolling scores to capture the public's imagination.

The cameras will still be on Woods at that stage, but who knows who will be the object of their focus come Sunday? Ultimately that is still the biggest question of the week - just like it always is.