Eleven weeks of evidence so far and there's still more than two months to go.

Lady Justice Hallett, the coroner at the July 7 Inquests, has now heard from scores of witnesses, who either survived or helped at three of the four bomb sites: Aldgate, Edgware Road and King's Cross.

In mid-January, we'll hear again from passengers and the emergency services, who attended Tavistock Square. Thirteen of the 52 victims were killed there.

And in February, London's fire brigade and ambulance services will have a chance to answer criticisms in more detail, namely why there were such lengthy delays in entering the tunnels to help the severely injured and dying. 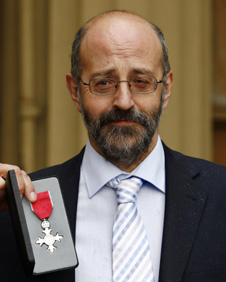 Timothy Coulson, receiving an MBE for his rescue efforts during the 7 July bombings in London

Two stand out for me. One was Timothy Coulson, a college lecturer. He was a passenger on a train that stopped opposite the Circle Line train at Edgware Road.

He could hear screams and cries for help, and saw the mayhem in the bombed carriage. Along with a fellow commuter, he smashed the window to their carriage with a pole, climbed through, jumped over the tracks and onto the train.

Stan Brewster, who was 53, was trapped in a hole in the floor. Mr Coulson clambered underneath the carriage to check his injuries. It wasn't long before Mr Brewster collapsed, unable to support himself any longer.

Mr Coulson gently lowered him to the track and closed his eyes.

He told the coroner: "As I did so I said a prayer for him, whether he was a religious man or not, because I felt he had finished with this world and shouldn't be staring at it, and I wished him the very best in this world to take with him into the next."

Another example of extraordinary bravery was Gill Hicks, an Australian woman on the Piccadilly Line train at King's Cross.

She lost both her legs in the blast. She used her own scarf as a tourniquet, ripping it apart and tying strips around her limbs to stem the flow of blood.

She told the coroner she then waited for upto 50 minutes in the wrecked carriage to be rescued. All the time she was worrying about falling unconscious.

She recalled being surrounded by a pile of bodies. And said there was just complete panic. Everybody was screaming in the packed first carriage. She described the darkness like thick tar. And heard a female voice, saying: "I'm dying, I'm dying."

A paramedic, a police officer and others finally helped get her off the train on a makeshift stretcher.

The coroner Lady Justice Hallett asked her: "Where did you get such an indomitable spirit? It sounds as if by a determination to live, sheer will power and quick thinking, you saved your own life."

She added: "Until I started this process I had no idea that people could survive injuries as horrific as yours.

Most of the journalists covering the inquests have sat in an annex at the Royal Courts of Justice.

One recently told me, he woke up in bed from a bad dream and thought his legs had been blown off.

If that's the effect on those listening, you can only imagine what it has been like for the families, who've lost their loved ones. They've followed every twist and turn on a daily basis.

Finally, it's almost impossible to predict how you would react if ever put in such traumatic circumstances.

I don't know what I would do. Would I stay to help? Or would my own survival kick in and force me to escape the intense heat, soot and dust of the tunnels?