There's little evidence as to who struck the fatal blow.

A gang of youths is involved.

And no one's talking.

So how do you solve it?

But since 2008, more than 350 defendants have been prosecuted in just 116 murder cases.

The centuries-old law called Joint Enterprise has been applied in all of them.

It allows entire groups of people to be charged with murder despite having played very different roles in a killing.

It's a first for Scotland Yard and is aimed at 13 to 15 year olds, highlighting the risks of getting involved in weapons and gangs. 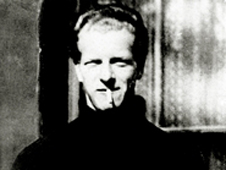 Many might remember the most famous example of Joint Enterprise.

In 1952, Derek Bentley was convicted of shooting a police officer even though he didn't pull the trigger.

He shouted: "let him have it".

His accomplice who actually committed the murder 16 year old Christopher Craig escaped the hangman's noose because of his age. The older Bentley didn't.

More recently, Joint Enterprise was successfully used in the murders of 16 year old Kodjo Yenga in Hammersmith in 2007, teenager Ben Kinsella in Islington in 2008, and Shakilus Townsend in Thornton Heath in the same year.

In all three cases, multiple defendants were prosecuted and convicted.

I've just spoken to the mother of Shakilus.

Nicola Dyer was shocked by the savagery of her son's killers but was not surprised when seven defendants were jailed for murder.

"It's hard to get your head around one person being responsible for the death of your child," she said.

"But when it's seven people and you're not really getting the truth about what happened. You're getting seven different stories. It's very hard to deal with."

Normally, the Crown Prosecution Service has to prove that the defendant either intended to kill or cause serious bodily harm.

Yet the law of Joint Enterprise is much looser.

It enables someone to be prosecuted for murder if they were present, had knowledge of or acted in a way that lead to a killing.

There is a concern though, this may lower the bar and could lead to people on the fringes of a group being prosecuted.

What do you think? Is it fair? Are the police scooping up too many people and "throwing the book" at them?

Or is it the only effective way of cracking down on teenage murders in the capital?