He was killed in front of his three-year-old granddaughter.

Ekram Haque, who was 67 and a retired care worker, was standing outside the local mosque in Tooting in August last year. He'd been there to pray because it was the Holy month of Ramadan.

CCTV was released by police of teenagers punching him. They run off as he falls backwards and his head hits the ground with such force, he never regains consciousness.

His granddaughter rushes to him but then is led away by some worshippers, who come out after the commotion.

It's a shocking case. We learn that the two teenagers sentenced today at the Old Bailey for a total of eight years for manslaughter were members of a so-called "happy slapping" gang. 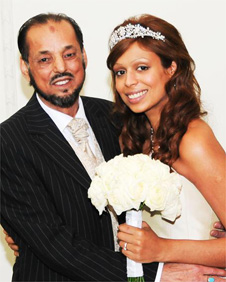 Detectives seized half a dozen video clips where the teenagers had struck innocent bystanders and recorded it on their mobile phones. They then run off and you hear them laughing.

Well, Mr Haque's granddaughter Marian still suffers from nightmares. She says she misses "her papa". Mr Haque was her primary carer and his son Arfan, in a victim statement, said he was the best dad anyone could have.

I've just been contacted by his step-daughter Jasmine Taylor, who wanted me to publish a poem she wrote when he was in intensive care in hospital.

It's called "Prayer for My Father"

"Today I am arriving in spirit, for you
In my thoughts constantly I am trying to guide you through.
My prayers become stronger with each days that pass,
Amazing you are, these days will never be the last.
Come back to our world, God may you give life back
Days filled with grief, guide me out of the black.
My father, my uncle, my life and my heart
Open your eyes and recovery start.
Sending you my love and everything with it
You gave me your love and now I may give it
Just in case I never told you before,
You are my father, you were the cure.
Love divine and God speed, bring back the man we all do need
Your work is not done, there are years to be had
Your babies are waiting please do not make us so sad.
Open your eyes and recovery start
This world is nothing without you, how can we live without our heart?"

Have you been the victim of happy slapping? What are teenagers like in your area? Are young people being demonised by the media? Please let me know here.