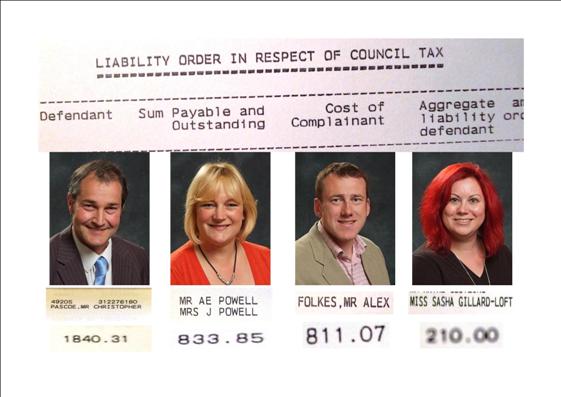 The four Cornwall councillors who were so behind with their council tax that they had to be chased through the courts have been identified. They are Chris Pascoe, Jan Powell, Alex Folkes and Sasha Gillard-Loft.

All four councillors are Liberal Democrats, although at the time of her liability order Mrs Powell was a Conservative.

Chris Pascoe was the subject of a liability order at Truro magistrates in July 2011 for more than £1,800. Chris said the debt relates to a property owned by his recently deceased father, which was the subject of probate at the time.

Only a few weeks earlier, on 16th February, Sasha was one of 35 named councillors to vote against the proposed council budget. As liability orders usually follow three months of demand, reminder and final warning, the council this week had to check if there had been any breach of the 1992 Local Government Finance Act, which disqualifies councillors from voting on a budget if they are more than two months in arrears. Sasha was in arrears on the day of the budget vote, but by only one month and 16 days. She therefore escapes the risk of a fine of up to £1,000.

Alex Folkes, who two weeks ago admitted two liability orders, is now identified as having been the subject of a third. Alex said the third council tax summons "slipped his mind" and he apologised if in an interview on 17th January he had inadvertantly given a false impression. The council had to take him to court on 22nd April 2010, 23rd September 2010 and 12th July 2011.

Jan Powell's husband, Tony, says he was responsible for the liability order issued jointly against them on 25th August 2010. Tony, who last year was Mayor of Liskeard, says Jan had no knowledge of their £833.85 summons. He claims he offered a repayment-by-installments scheme to the council which, he says, should have prevented the liability order.

The disclosures, which come as a result of a joint investigation by BBC Radio Cornwall and the Falmouth Packet newspaper, mean that 10% of Cornwall Council's Liberal Democrat group had to be taken to court before paying their council tax between 2009 and 2011.

The revelations were made possible by trawling through public documents in magistrates' court records This increases pressure on the Information Commission to rule against Cornwall Council - which has stubbornly refused to identify the councillors, claiming that to do so would breach data protection laws.

The disclosures also make it clear that Porthleven councillor Andrew Wallis, who "outed" himself last year as having been the subject of a council tax liability order, was actually confessing to a non-payment which pre-dated the 2009-11 financial year accounting period.

There will be more on this - much more - on BBC Radio Cornwall's Breakfast programme on Wednesday morning.

You can stay up to date with Graham Smith's Blog via these feeds.