You can't spend more than 20 years in journalism without seeing the inside of a court room. I'm no battle veteran, perhaps a Corporal with a few campaigns under his belt, but to continue the military analogy, this was a proper bombardment to surprise a Brigadier or two. Mitigation hearings surely don't come more dramatic.

Court Four at Southwark has been busy throughout: on Wednesday it was rammed, with solicitors and journalists squabbling over chairs and people straining to hear the judge's words in the public gallery at the back.

On the previous day former Pakistan captain Salman Butt and fast bowler Mohammad Asif were both found guilty of conspiracy to cheat and conspiracy to accept corrupt payments for arranging the deliberate bowling of no-balls in the Lord's Test against England last year.

Left-arm seamer Mohammad Amir and the players' agent, Mazhar Majeed had already pleaded guilty, but with reporting restrictions in place we hadn't been able to tell you. Now they appeared in court for the first time.

By the time proceedings began around 1100 GMT, pet theories had all been talked out by the sizeable gathering of journalists, the ranks swelled by the presence of some specialist cricket correspondents, including at least one former England captain, but I bet with all his inside knowledge of the gossip around match fixing even Mike Atherton was taken aback by what was to come.

The Judge Mr Justice Cooke was unimpressed by Amir's guilty plea, couched as it was in terms relating only to the Lord's Test. He claimed the two no-balls he delivered as part of the conspiracy were his only involvement, but evidence in court during the trial suggested otherwise, and the judge wanted answers.

He was handed a further file of submissions by Amir's team with the promise they would answer his concerns.

Then came the first of the day's interjections from the press. Quoting the Master of the Rolls in 1982, a colleague suggested reporting restrictions should be lifted as the risk of contempt was small.

A good effort, but not accepted by our red-robed and bewigged High Court judge who has handled this case as adroitly as one would hope and expect throughout. So, armed with yet more reading, he retired and so did we until 1400 GMT, when the shelling really started.

Back in court the atmosphere was getting even more febrile, the anticipation unexpectedly heated by the intervention of Majeed's counsel, who told the court they had changed their minds and wanted reporting restrictions lifted after all.

A game-changer for we custodians of the fourth estate who'd been given permission to tweet from the start of the trial. We began clattering out this drama to the world in 140-character bursts.

Majeed's lawyer went to town. Butt, he claimed, and not his client had initiated this fixing scheme in 2009, aided and abetted eventually by the others in the dock but also by a fourth player who wasn't facing charges. He offered no names, but if the International Cricket Council (ICC) get the transcript of the trial they'll have a few clues. 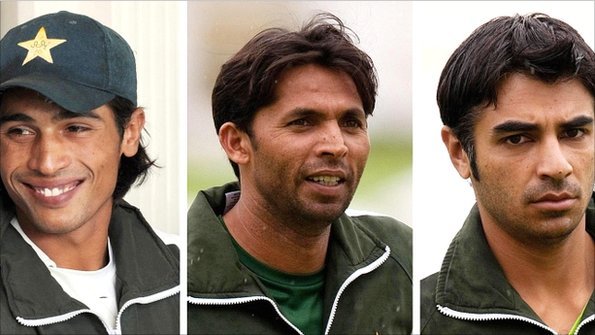 Pakistan cricketers Salman Butt and Mohammad Asif were found guilty of their part in a "spot-fixing" scam while Mohammad Amir had admitted the charges prior to the trial. Photo: PA

Then came the moment that led to the sharp, audible intake of breath. Majeed's counsel said he was going to explain how the proceeds from the News of the World's sting were distributed. He said that Majeed had paid £77,000 to the players involved in the no-ball fix, out of the £150,000 he was given.

He said £2,500 went to Amir, £10,000 to Butt, who was looking wretched in the dock at this point, and £65,000 to Asif. Asif? The man who said in his defence the no-ball was just a coincidence, and that he'd never had anything to do with this, and had never taken any money? Why did Asif get the lion's share? Well, according to Majeed's counsel it was because they needed to give him a big payment to keep him loyal to their group.

Pause, breath, mental adjustment. Mr Justice Cooke asked for a repeat. We hadn't misheard. Could the implication be that there was another fixing clique in the dressing room who were seeking his services? Fingers and thumbs flew as did the tweets.

Then another development. Perturbed, counsel for Butt and Asif raised their objections. This hadn't been information used as evidence and tested during the trial. It amounted, they argued, to "derogatory mitigation", damaging to their clients who denied any knowledge of the payments. This they said should be brought under reporting restrictions.

But the genie was out of the bottle, a point made again by interjection from another colleague, because we'd all tweeted it, and the dialogue among the twitterati was already under way. Too late to impose reporting restrictions now.

"True" said the judge, "too late" and anyway he didn't buy the objection. He did however agree that as this wasn't part of the trial evidence it would be discounted in his calculations in respect of the sentencing.

Majeed's mitigation finished with a story of how a good man, generous of time and money, devoted to his family and his diabetic wife had lost a fortune in the property game, and now understood he would be going to jail.

Not, according to his counsel, as the evil fixer as he had been portrayed, it was claimed, by the defendants in the trial when it suited them. No, no, far from it. Majeed would admit to being the arranger, but not the corruptor.

Butt's mitigation painted the picture of the man who had lost everything, from national hero to figure of contempt. Reputation, livelihood, the chance to be Pakistan captain, the chance to be involved in the game he lived for. His money was spent.

All that was left, said his counsel, was his family and for their sake could leniency be pleaded? An hour before his guilty verdict, his wife had given birth to a son. An immediate custodial sentence would keep them apart for who knows how long?

Asif's pleas went along similar lines. Reputation in ruins, livelihood destroyed, a four-month old baby girl at home needing a dad, all because his front foot had strayed over the crease when delivering that pre-arranged no-ball for the benefit of gamblers unknown, who stood to make far more from this than he did.

And so Amir. Head in hands at times in the dock, he looked older than his teenage years. Nineteen now, 18 at the time. Not for money, it was argued, had he done his. He was pressured into doing it and he was caught in a trap - sprung by whom? He did not say and made clear he would not name names.

His lawyer read his statement wherein he apologised to all of Pakistan for his actions. A prodigy, who did not know if he'd ever be employed to play cricket again. Mike Atherton's Times article where he argued for understanding in Amir's case was read in court.

Athers listened on from the press seats, watching the faces of the defendants, that seemed at least in Butt and Asif to have lost the indifference, perhaps arrogance that they wore at times during the trial.

A colleague who'd interjected earlier over reporting restrictions, and who has guided correspondents like me through the complexities of countless trials, observed that the players reminded him of juveniles he'd seen in the dock who'd suddenly realised the enormity of what they were facing, and whose swagger had evaporated.

He was right. It had. The consequences for these players are unavoidable and life changing. Sporting cheats, wherever they are, should be sleeping less comfortably. Good.