Papaver rhoeas. Who would have thought something so elegantly simple could cause so much trouble? The corn poppy, perhaps better known as the Flanders poppy, has bloomed everywhere this week.

Front and back pages, television and radio bulletins, Twitter, blogs and websites. It was even a topic at Prime Minister's Questions in the House of Commons - while a future King of England wrote a letter about it and some protesters took to the roof of Fifa House in Zurich.

We all love the poppy - according to David Cameron - except, perhaps, those gardeners conversant with its latin name and who treat it as a weed.

Nonetheless, there was a palpable sense of righteous indignation when the Football Association's desire to have the emblem embroidered or printed on the team's shirts for Saturday's friendly against Spain was thwarted by Fifa president Sepp Blatter and the rest of the Fifa crew. 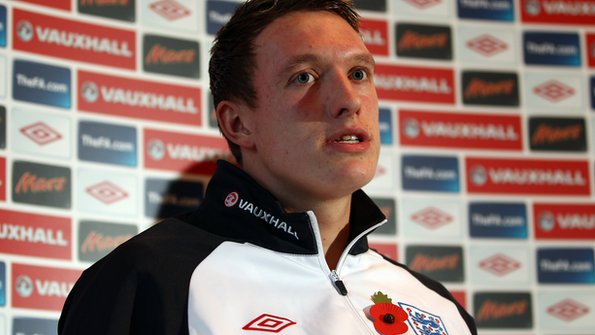 England defender Phil Jones will now be able to wear a poppy on his kit as well as his tracksuit. Photo: Getty

Fifa's calculation, therefore, was that the poppy represented a political statement and would not be allowed.

A statement read: "We regret to inform you (the FA) that accepting such initiatives would open the door to similar initiatives from all over the world, jeopardising the neutrality of football."

Message received but not understood.

"How could the poppy be construed to be a political symbol?" came the riposte, led by Sports Minister and ex-Life Guards officer Hugh Robertson. His letter in support of the FA's request got straight to the nub of the argument.

He wrote: "It is not religious or political in any way. Wearing a poppy is a display of national pride, just like wearing your country's football shirt. I hope very much that you will approve this request."

At that point, there was no sign of Fifa budging.

The FA, clearly irritated, circulated a long list of the other arrangements it had in place for Saturday to mark Remembrance Day.

Its relationship with the armed forces has grown much closer over recent months, with Tickets for Troops, support for Help for Heroes, the laying of a wreath, the minute's silence, the poppy emblem on the training tops... In fact, pretty much everything conceivable, short of the emblem on the shirts, was now in place.

The heat in the debate was growing and soon the voices of dissent became a clamour.

Then it was time for the Prime Minister to weigh in. "Outrageous," he said.

Was there just a hint of revenge for perceived injustices over England's failed bid to land the 2018 World Cup, I wonder?

No sooner had Cameron published his letter to Fifa, decrying the stance of football's world governing body, than the Duke of Cambridge, future heir and FA president, let it be known that he, too, had sought to straighten out the matter with Blatter.

As those letters were making their way, presumably by fax, to Fifa headquarters, the guardians of the game had a more immediate problem to deal with.

Two protestors had joined the crows on the roof of Fifa House, attempting to make their point with a banner featuring the fateful flower. To use the popular sporting parlance, this was becoming squeaky bum time in the pressure cooker. And nobody wants that.

What Fifa needed now was an elegant solution - and, with the intervention of an active and qualified referee, they got one. Chris Heaton-Harris, MP for Daventry and regular man in the middle in the Northamptonshire Combination League, spotted the possibility.

The letter of the law, drawn up, somewhat ironically in this case, by the Home Nations and Fifa, specifies there should be no unwanted message on the essential kit. However, it does not refer to any extra bits of "outerwear".

Heaton-Harris contacted Fifa with the suggestion that the poppy be included on the black armbands the players were to pull on. Hey presto... faces saved all round. Laws of the game upheld, royalty's anger contained and the public pacified.

Well, all except, perhaps, the pacifists...