The sight and sound of the Indian women's 4X400m relay team being roared home to win gold was one of the highlights of the Commonwealth games in Delhi last year.

The nation had been yearning for track and field success, and here was a team of bright talents, role models for women in India, beating the best of the rest of the Commonwealth.

That landmark success has been tarnished with the news that three of the four members of the team have failed drug tests over the last few days. Ashwini Akkunji, Mandeep Kaur and Sini Jose have all tested positive for anabolic steroids, and are suspended pending further investigation.

Apart from the Commonwealth gold medal, what all three have in common is a Ukrainian coach named Yuri Ogrodnik. Well, they had him in common, but he's now been sacked, according to the Indian sports minister, Ajay Maken. 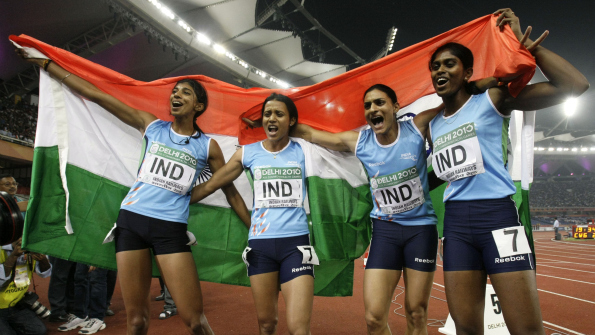 In fact, six members of the women's 400m squad, coached by Ogrodnik have now been suspended after a spate of positive tests for different steroids. The Indian sports ministry is in a spin: Akkunji was the poster girl of Indian athletics, a double gold medallist at the Asian games, and expected to go on to even greater things. There were genuine hopes of a medal at the London Olympics, but that dream now seems shattered.

Minister Maken hasn't pulled any punches in his reaction to the scandal: "The athletes have disgraced the whole nation and it's very disturbing for us," he said.

"Athletes will get their punishment in the form of suspensions, bans and losing their medals... but we can't let the coaches and any official involved in this episode get away scot-free."

At the moment, there's no suggestion Ogrodnik has done anything wrong, and he's reported in India as saying he knew nothing of any drug taking among his athletes. Ajay Maken is unimpressed: "The coach says he didn't know that the athletes were taking banned substances then I think he's all the more responsible for what's happened. The coach is supposed to know what they're taking and tell them what to take."

The tests were apparently carried out either at the national training camp in Patiala, in the Northern state of Punjab, or after a track meeting in the Southern city of Bangalore in late June.

The athletes have all protested their innocence and blamed contaminated food supplements for the results, but the strict liability rule allows no such excuses.

Drug tests are split into two samples, and the second or B samples given by the women will now be tested. They almost never contradict the A samples. There will be a disciplinary process, and a two year ban would be the normal outcome.

India's national anti-doping agency recently revealed that 122 positive tests had been recorded in an 11 month period to April of this year, mostly among wrestlers and weightlifters.

As a result they said they intended to increase the amount of testing, and carry out raids on athlete's rooms where drugs use was suspected. Ajay Maken has called for further action, including better co-ordination with customs agencies to restrict the import of banned performance enhancing drugs, and has instigated a full inquiry into the current problems.

Lord Coe, in the stadium at the time, said that the success of the women's relay team at the Delhi games "may just have changed the direction of track and field... not only in India, but in Asia." The events of the last few days have surely derailed that hope.