These continue to be boom times for football.

Fifa's latest financial figures for the four years to the end of 2010 show the organisation earned more than $4bn. That's an increase of 59% over the previous four year stretch which included the World Cup in Germany.

Its broadcast rights and marketing which are leading the boom of course, and Fifa is riding the wave that's thrown the Premier League skywards too. 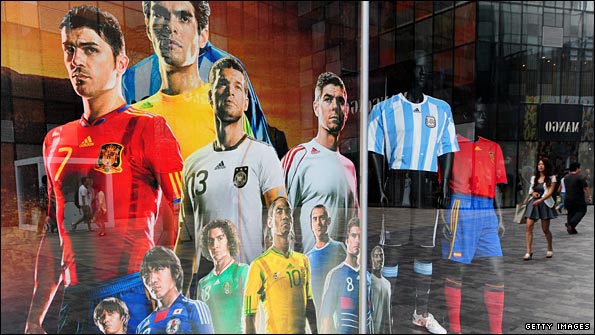 The World Cup was a major earner for Fifa

Fifa says of the money it raised, 70% was ploughed back into the game by staging tournaments and investing in projects. Fifa put $794m into football development, including its 'Goal' and 'Win in Africa' projects.

More than $350m has been handed out to the member FAs, under what's called the Financial Assistance Programme.

The joke used to be it helped increase significantly the number of luxury cars in the car parks of some federations, but Fifa says this money is properly audited, and that 21 FAs are selected at random every year, and their spending checked closely to make sure it's appropriate.

Fifa still manages to spend handsomely on itself. $707m went on its operating expenses, including the burgeoning fifa.com operation. Deputy secretary general Marcus Kattner insists they stuck to their approved budget, and that costs are under control.

He says the sum includes their substantial staff costs for the development projects and the 23 international tournaments they ran over the four year cycle, many of them small, financially unproductive events.

"I believe operational efficiency is at a high level," Kattner says. "Of course you can always do more to reduce costs, but I believe they're at a good level."

The figures also emphasise Fifa's dependence on the World Cup for the lion's share of its revenues, and the risk it would face of ever having to take the step of cancelling the event. Executives concede finding ways to be less reliant on the one big event, and generating income other ways is a huge challenge.

Overall, staging the World Cup in South Africa resulted in a net loss for Fifa. The budget of just over a billion overran, compensated for in part by higher than expected revenue, but overall, the net cash outcome was a $31m loss.

Fifa's president Sepp Blatter says he's a happy man. It's amazing how much of a warm glow $4bn can bring to a man but perhaps the smile reflects more the fact that still, despite the talk, no-one has come forward to challenge his presidency.

Perhaps, before the deadline of the end of March, a hat, or an Arab head-dress will be thrown into the ring?