What happens to F1 if Bahrain is cancelled?

The cancellation of the GP2 series event in Bahrain against the background of continuing unrest in the Gulf state's capital Manama has raised serious concern about the viability of the F1 season opener on 13 March.

Bernie Ecclestone has promised a decision on whether the race can go ahead next week. At present, the Bahraini authorities are trying to sound optimistic. Cancelling the event would be a huge blow to them.

Constructed in time for the 2004 season, at an initial cost cost of around £100m, the area surrounding the circuit has since been identified for a huge investment project worth more than £1bn.

It'll house business, entertainment and educational space, according to the planners. Perhaps they cast an envious eye in the direction of their Gulf neighbours in Abu Dhabi, where the extraordinary Yas Island project is the home of the state's own Grand Prix. The track costs alone reportedly stand at £800m. The Island? More than £25bn. 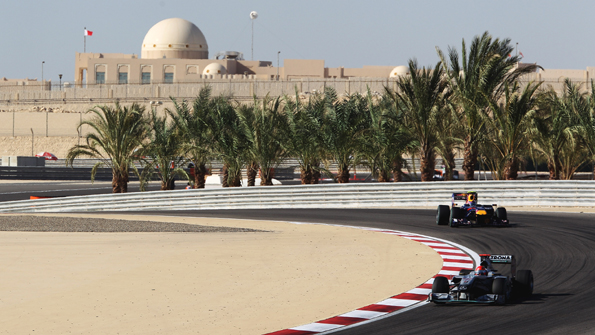 The Bahrain Grand Prix is scheduled for 13 March. Photo: Getty

These Grands Prix matter to the Gulf states as they attempt to establish their importance in the world, their voice on the international stage. They make headlines and showcase the nation. They're part of foreign policy. Look what the 2008 Olympics meant to China.

Bernie Ecclestone understands the desire for nations to use sport to promote their international credentials, and he's been quick to exploit the opportunity. The truth is, those countries need F1 more than F1 needs them.

F1's global landscape is rapidly changing. The appetite for breaking new ground continues undiminished among the major sports organisations: look at FIFA. The success of the 2010 World Cup in South Africa must have been a factor in emboldening the executive to go for Qatar in 2022, along of course with the commercial opportunities. The Gulf states are the big spenders in the sports field at the moment and their ambitions are high.

F1 has already established itself in Asia, with China and Korea joining Singapore, Malaysia and Japan. This season for the first time it goes to India. F1 isn't short of nations wanting a slice of the reflective glory. In 2012 the circus returns to the United States in Austin, Texas. 2014 should be Russia's debut.

The calendar is already packed. This season for the first time there will be 20 races. Expansion has its limits in terms of what the teams can cope with or are prepared to put up with. If the Bahrain race goes, it's very unlikely it can be rescheduled.

The churn has seen some of the old established races like the Austrian Grand Prix fall away. The British Grand Prix hung by a thread, before a long-term deal was done. Sentimentality isn't Bernie Ecclestone's strong suit; deal-making is, and the effect of the government-led bids to stage races in new territories has been to force the old guard into improving their act, upgrading their facilities, doing things better.

While embracing the new, F1's established acts have become stronger too. The Gulf Grands Prix have helped the commercial rights holders for the sport turn over more than $1bn (£616m) according to the 2010 accounts, and double the profits to $193m.

F1 is a successful brand which would survive the cancellation of the Bahrain Grand Prix, should it come to that. The worst of the damage would be felt in the local economy, and reputationally by Bahrain.

F1 will move on. It has no shortage of suitors.