I'll never forget the buzz of walking along with the crowds towards my first ever live experience of a finals night at the Olympic Games.

It was in Atlanta in 1996, where I was covering swimming for the BBC's World Service.

Tickets for the aquatics events were highly sought after, with United States swimmers expected to dominate. As you'd expect, the black market was flourishing.

On the way in, I must have passed three or four regular looking American guys in their deck shoes, shorts and T-shirts holding up strips of card declaring: "I need a ticket".

They seemed genuine swim fans. Weaving against the human tide heading into the pool was a species I recognised: baseball caps, stubble, sweating in their denims and trainers. When they opened their mouths, it came as no great surprise. I've heard it at pretty much every major event I've been to. A regional English accent; "buying and selling, I'll buy any spares..." 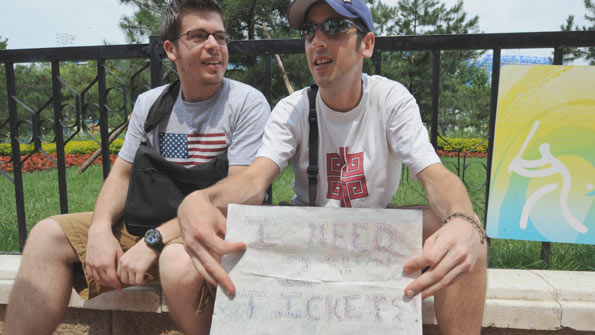 Demand will always outstrip supply for certain events, as these would-be spectators discovered in 2008 (Getty)

They duly satisfied the demands of the desperate fans, and trousered no doubt a tidy profit, in hard cash, no questions asked, no income tax, not vat, God bless hooky street...

They'll be out at the London Games too, working their angles. But they'd better steer well clear of the Metropolitan Police. The Met is on a mission. In truth, the guys doing the hand-to-hand stuff down in the crowds are just a small part of the problem.

Their bosses, and often it's organised crime, have business plans these days according to the Met: they spread their risk: fake ticketing websites, hospitality scams. They are cleverly constructed hoaxes, ways to get the unwary to part with their hard earned.

Alarmingly, It works every time. Remember Beijing where swimming heroine Becky Adlington's mum and dad were stitched up by scammers, left in the lurch having parted with more than £1,000 for tickets that apparently never existed.

They were just two of many sports fans who've found themselves in the same situation, usually without the high profile that eventually brought a happy ending to the Adlington's saga. People who are desperate to see something are swept along by the promise of a way in, and leave their critical faculties behind. How many of those tickets clasped in the greasy palms of the touts will be fakes? How would you know?

Already, the Met has made more than 30 arrests, is investigating the usual suspects, and that includes those who hover around Premier League stadiums on Saturday, then head to the theatres and concert venues later on.

The police know these characters, they know they were out at the World Cup in South Africa, in Beijing, and Vancouver.

They intend to seize their cash, and hope the courts use their power to hit them with a fine of up to £5,000... in a market worth millions that might seem somewhat paltry, but if they can hit the big players with their dodgy websites under the fraud laws, the penalties rocket, including detention at Her Majesty's pleasure.

There are 36 officers working full time just on Olympic ticket fraud prevention. Already, they say, they've looked at or taken down hundreds of websites, and are investigating a similar number of known touts.

On top of the Met's work, the London Organising Committee (Locog) has set up its own systems.
It is using software to track suspicious multiple ticket applications. Each ticket will be bar-coded, and zapped on the way into the park, and/or the venue. If anything that comes up dodgy, or doesn't seem right, the ticket holder will be taken to one side, and will be subjected to a, "quiet word".

Unbelievably, in the past a lot of black market tickets have come from allocations originally given to the 200 or so national Olympic Associations, which is part of the Games family.

This time, the system for allocating tickets will be much more intelligently focussed.

Those with little or no track record of producing successful athletes in a particular event will find they won't be given many tickets for it. Those that ask will be disappointed.

Locog's view is that if you get the ticket into the hands of a genuine fan in the first place, it's far more likely to be, "sticky". In other words, they won't let it go at any price.

There'll be a mechanism for selling back unwanted tickets, and moving them on to friends and family at face value. It isn't a crime, but seeking to do that and make any kind of profit is, and this time, the Met means business.

The advice to all is, there's only one place you can be sure of getting a genuine ticket, and that's through the London 2012 ticket website, at www.tickets.london2012.com It's your first port of call.