To be honest, I was a little taken by surprise when the Commonwealth Games opening ceremony's dress rehearsal started 20 minutes early.

Things began inauspiciously when a stray dog legged it on to the running track and did a nifty 100m with about an hour to go before the scheduled start, and the floor manager had to do a lot of shouting to make sure people got off his cables.

One time-served freelance ceremonies expert sighed and said he expected things to get under way sometime "in the next 20 minutes or four hours", and was looking forward to taking delivery of the kit he had ordered to make various bits of the scoreboards work.

It has been a swelteringly hot day in Delhi: up to about 35 degrees... and I will be honest, the best thing about being here for the run-through, early on at least, was finding some properly cold water to drink.

But once the mozzie cream had been applied - no sprays, they are banned from the venues - and we got all the lines to work (I cannot tell you how stressful that part of our job is) it was time to settle back and take it all in.

Now, I am going to be here for real on Sunday, but before then I cannot give any of the details away as they are "under embargo". However, it is OK to paint a picture, in Technicolour. - that is with a capital T. 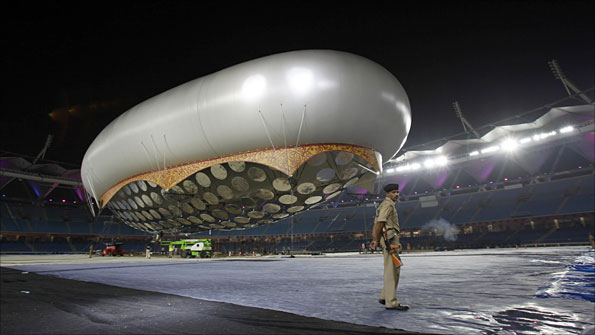 The Games will begin with Sunday's opening ceremony. Picture: Reuters

The ceremony is going to look fantastic on television. I watched a lot of it with a monitor next to me from the commentary position, and it works well.

And you will not be short-changed in the stadium either... it is a show that vibrates with the sounds and rhythms of India, majoring on the nation's culture and heritage rather than Bollywood glitz, but you would hardly expect that to be absent, would you?

Of course, it is meant to be spectacular, make you go "oooh". As with China in Beijing in 2008, this is India annoucing itself as the host of a major international sporting event, and it does so, to my eyes at least, with aplomb.

There is no escape from the pre-requistites of such ceremonies like the speeches, anthems, flag raising and athletes' parade, all of which at times spin the show out beyond most people's attention span, but such is the nature of the beast.

Watch the lot if you are a fan, make sure you see the start, then dip in and out if it is more of a passing interest!

Elsewhere today, the feedback on how preparations are going has continued to be more positive than negative. The England athletes I spoke to up at the village all said they felt it was well up to the mark.

Mick Gault made me laugh. The veteran shooter said he had heard all the media reports before coming to Delhi, adding of the set-up: "This one is one of the best I've seen. Before we came out there was all the bad press. We were all going 'oh my God - dengue fever, mossies and we're gonna die' but it's brilliant, it's really nice."

He is a man who is at his fifth Games, so his view has to be respected.

I am a bit concerned about the heat the hockey players are going to have to deal with... Their matches are scheduled all over, but some are due for the middle of the day.

Kate Walsh, England women's team captain, stated: "We're going to hope to play our game which is fast and attacking, and we're going to stick with that. There may be slight elements we're going to have to change with the heat." Yes Kate, I think you are right.

World champion and Commonwealth Games gold medallist Nathan Robertson was properly chuffed to be chosen to carry the England flag in the opening ceremony.

He spoke of the adrenaline rush of walking into the stadium with the team. He also mentioned the bird perched on the net when he went in to check out the badminton venue as well... I guess that will be shooed out, along with the random stray dogs in the main stadium once things start for real.

If all goes to plan at the opening ceremony, they are going to get off to a dynamic and hopefully thoroughly enjoyable start on Sunday.