Wembley must get back to grass roots

The old Wembley Stadium was many things to many people.

Home in 1966 of the English nation's finest footballing hour (well 90 minutes plus extra time) and for decades a place of pilgrimage for fans enjoying the agony and ecstasy of their club's hard-earned cup final.

As the backdrop to the 1948 London Olympics, its Twin Towers became an instantly recognisable, even iconic, piece of sporting architecture. It was also a pain to get in and out of, didn't have enough loos, and if you weren't careful with your choice of seat you'd wind up behind a pillar.

By the time it closed, it was outdated, and becoming unfit for purpose.

Somehow on FA Cup final day, the sun always shone, the grass sward looked like a billiard table, and everyone loved playing there.

Or at least that's how we remember it. In fact, sometimes it chucked it down, the surface cut up and there were complaints, not least following the 1970 Cup final played shortly after the Horse of the Year show. Leeds and Chelsea fought out a 2-2 draw on what cricket fans of a certain age might refer to as a sticky dog - with potholes.

Even then, there were compromises to be made because of the Football Association's obligation to make Wembley pay its way.

The problem now is that the huge running cost of the stadium means it needs to be used a lot, and for many different things, from humble old football matches to motorsport extravaganzas.

It needs to be a cash cow, not an albatross. The FA needs Wembley to make money partly because of the huge mortgage on it, but also because part of its raison d'etre is to develop and invest in the national game. If Wembley's a success, the logic follows that the game's grass roots will be better nourished.

But it's grass roots of another kind that are the primary issue here.

Managers used to relish the prospect of a game at Wembley, knowing their players could stroke the ball around all day with confidence - not so any longer.

Arsene Wenger last year likened the prospect of playing at Wembley as being about as welcome as a visit to a dentist using equipment designed in the 1950s.

Sir Alex Ferguson, Martin O'Neill and Harry Redknapp have all savaged the playing surface and even the Wallabies rugby players gave it a kicking after they appeared there a couple of years ago, for cutting up so badly that scrummaging became nigh-on impossible. 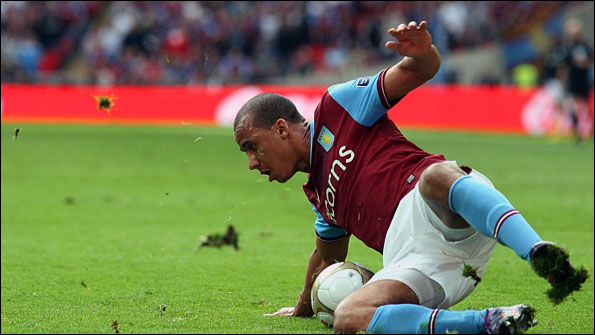 Ever since the first of the now 10 pitches was laid at the new stadium, there have been problems. Twelve months ago, the FA took radical steps, replacing grounds manager Steve Welch, bringing in a specialist consultancy company and thinking again.

After his departure, Welch said he believed the problems went back to 2003, when the stadium specification was decided. He inherited a surface laid and maintained by the building contractors, and said he'd flagged up a number of potential issues including drainage and irrigation, all of which subsequently materialised.

In their own publicity material in 2007, the FA spoke of creating a pitch worthy of the "Venue of Legends", emphasising that the latest tried and tested technology was being employed "with a fibre sand pitch made up of an underlying web of heating and drainage pipes, with grasses selected from 250 different varieties with up to 200,000 leaf blades in every square metre".

The FA have been rather less voluble about their much-vaunted pitch recently. Perhaps because they're having to face up to the reality that there currently doesn't seem to be an answer to the question of how to make the stadium pay, whilst actually making it play.