Ticket fiasco must not dent the football carnival

Organisers of the World Cup in South Africa must be wondering when their luck will turn. Perhaps in time for the tournament's opening match on 11 June, when the hosts face Mexico?

Latest efforts to give ticket sales a much needed boost got off to a bad start on Thursday when the integrated Fifa ticketing system threw a wobbly and went into limp-home mode.

Fifa and the organising committee had made a huge deal of their decision to give local fans without credit cards or easy access to the internet the chance to scoop up a few of the 500,000 unsold seats at "bargain" prices. 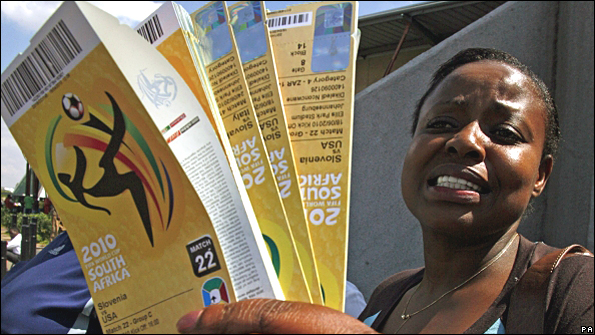 Enthusiastic supporters queued all night to get an early opportunity to part with their hard-earned rand at either the local branch of the local First National Bank (FNB) or one of the new ticket offices that have been set up.

But after an early spurt, the computer said 'no'.

On the lunchtime TV news in South Africa, a somewhat harassed FNB spokesperson asked for people to have patience as they tried to sort things out, with a heavy reminder that this was not a problem of their making.

"Bank staff are taking enormous strain," she said. "We're feeling the pain much more than Fifa itself."

Things got worse as the day wore on, with police deciding to intervene and use pepper spray to stop scuffles in queues at a posh shopping mall in Pretoria.

That came after the death of a 64-year-old man in Cape Town, waiting at place number 565 in the line, from a reported seizure.

An organising committee statement sought to play down the computer problems and accentuate the positive, making a virtue of the fact that the high demand was responsible for almost crashing the system and boasting of nearly 4,000 tickets sold in the first hour, to 780 different customers.

But even at that pace and with, let's say, tickets on sale eight hours a day, it will still take more than a fortnight to shift the remaining 496,000.

While the cheapest seats are selling like hot cakes, cash-paying South Africans are much less likely to be interested in the pricier tickets which stretch to well beyond the country's minimum weekly wage.

The reasons the organisers are in this situation in the first place are complex.

Most fingers point to the global economic downturn as prime suspect, a factor entirely beyond the control of South African World Cup chief Danny Jordaan and his organising team. Fifa now concede it made the ticketing system too complicated for the domestic market and admitted it should have gone to direct cash sales earlier than it has.

Less than half the population have easy access to the internet, which for too long has been - along with possesion of the right kind of plastic - the only way to book your seat.

There has also been negative publicity about security, however over-stated that may be.

All of this is a great pity, as the World Cup promises to be spectacular. The locals' enthusiasm for the event is beyond doubt. It will be a noisy, more visceral cultural experience than the average European equivalent.

It will also be a great chance to see how things are done in South Africa, a stunningly beautiful country wanting to put its best face on for the world.

When the TV cameras pan around the grounds, let's hope it's that face, not the empty seats, that we notice most.