In less than a minute, Chester City were no more.

The winding-up court's a bleak place. It's where dreams end, where people have to plead for understanding, but often have to admit they've failed.

Before Chester got the chop, numerous others, including a property company, an import business and a small sports car manufacturer, all went to the wall.

One director, distressed, begged for more time to pay her tax bill, apologising that having to look after a sick relative was proving too much. 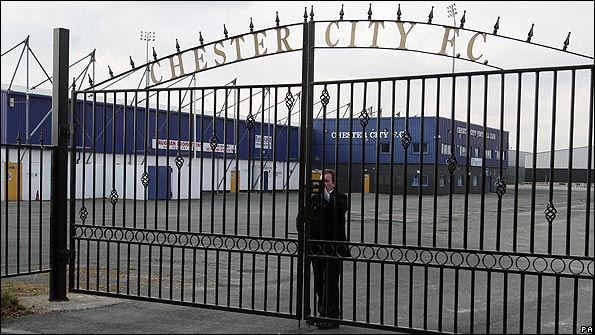 It's in these surroundings that football clubs are fighting for their lives. There is some sympathy, but precious little is left for ailing football clubs.

The HMRC's barrister, Matthew Smith, has heard it all before. So too Mrs Registrar Derrett, possessed of a businesslike manner, bordering on the brusque, and when merited a chiding tone. She runs a tight ship - don't mess.

Southend, said the HMRC's man, were a "habitual defaulter", "plainly insolvent" and "must be wound up today". He accused them of playing for time by previously claiming they would contest their VAT bill, but failing to put a case together.

There followed a moment of drama as Southend's brief produced a sealed letter, hot off the press, setting out sources of future funds.

There followed a pause as its contents were digested then dismissed by the HMRC.
It cut little ice with registrar Derrett either, who concluded that: "On the face of the evidence, this company is insolvent."

Southend's survival hinged on the argument that it's in the midst of a negotiation with a major retailer to redevelop the ground and its surroundings.

"It's only the retail development that makes me hesitate," said the Registrar, pondering on whether to pull the trigger, but instead opting for the stay of execution.

Southend United fans, your club has 35 days to pay up in full.

The ice that Cardiff City are skating upon is no thicker.

"Robbing Peter to pay Paul," has been their approach, according to the HMRC.
They've repaid some of the PAYE and VAT due, but those are historic debts, and new ones are racking up.

But wait... who's that riding over the hill?

A Malaysian businessman promising £6m, according to Cardiff as they fought their corner, with Datuk Chan Tien Ghee the trump card in their quest for more time to pay.

That wish is "opposed with some cynicism" by HMRC, whose riposte was to point out there was no evidence of the money promised.

This was a point taken up by Mrs Registrar Derrett who, in granting more time, described Cardiff as apparently, "a company unable to repay its debts as they fall due and now relying upon a third party investor".

And if there's no substance, Cardiff and Southend will be faced with going the same way as that sports car manufacturer, the import company and the property business - leaving the bewildered fans to pick up the pieces.