Barack Obama's change of heart about backing the Chicago 2016 Olympic bid in person in Copenhagen this week suggests not only how close this race is but how nervous the city is about its chances.

Just a few days after declaring that tackling his healthcare reform agenda had to take priority, the president seems to have found some space in his diary.

He will be in good company - and ought to be able to discuss pressing global issues over smorgasbord with the King of Spain Juan Carlos, the President of Brazil Luiz Inacio Lula da Silva and quite probably, the new Prime Minister of Japan, Yukio Hatoyama, or Japanese royals Crown Prince Naruhito and Crown Princess Masako.

Long, long gone, it seems, are the days when the most exciting member of a bid team would be a grey-haired Greco-Roman wrestling silver medallist from the 1950s. 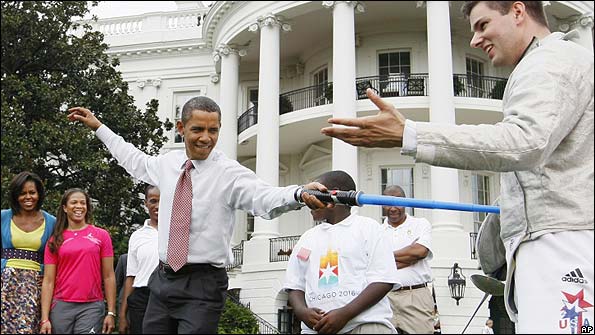 These days, after Tony Blair and Vladimir Putin's interventions for London and Sochi respectively at vote time, the pre-occupation is making sure the political premier heads a glittering list of sporting stars, personalities, and celebrities right out of the A-list.

There is no doubt London benefited from the Blair-factor in Singapore four years ago, and the bid team used him to good effect: a series of fairly low key meetings in his hotel room, one on one with a few of the 'target votes'.

IOC members might not appreciate being thought of as targets on bits of paper, but these bids are now being run like election campaigns, by hard-nosed political strategists working out tactics for grabbing the second or even third preference votes that will be crucial to the chances of any of the bidders.

There was already enough heat in this campaign, and Mr Obama's presence raises the temperature to flat-roast.

Strict IOC rules dictate the boundaries of what is permitted, and transgressing them could be fatal.

Expenses-paid trips to bid cities for voting members with freebies ranging from the odd case of wine to dental work to scholarships for offspring, were banned after the Salt Lake city "votes for gifts" scandal.

It is all strictly above board now, absolutely no denigrating your opponents.
However, one of the unexpected consequences of the ban on members' visits seems to be that if you cannot go to the city, the city now comes to you, with half the nation's politicians, sports stars and famous alumni in tow.

To be honest, I fear it is becoming a bit of a circus, and the IOC will be a little uneasy about the 'sideshow' detracting from the serious business of the vote itself.
I can understand Michael Jordan being part of Chicago's team, but Oprah Winfrey?
Mind you, Rio, who have emerged as the favourites, will play the Pele card, and Tokyo and Madrid will not be shy with their celebrities either.

The consensus is that the Brazilian city just edged the technical part of the bid process, and Rio has a strong story to tell of the regenerative power of the games in a rapidly developing city and national economy.

Chicago, by the analysis of those experts who live and breathe every detail of these campaigns, is still in with more than a puncher's chance, however, and in Mr Obama they have the ultimate heavyweight.