The FA's announcement of an investigation into the events at Upton Park last night was swift.

That was scarcely surprising for a number of reasons, not least of which is that any international perception that hooliganism is on the rise again in English football will kill the 2018 World Cup bid stone dead. 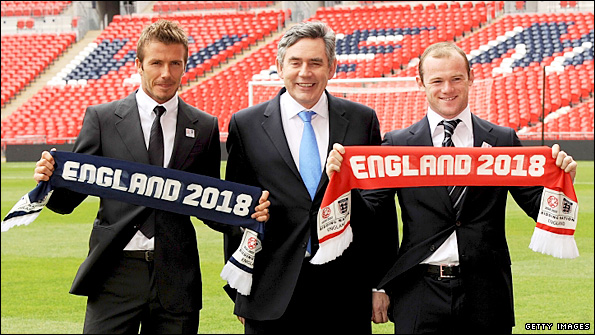 It's the thing the FA and bid chairman, Lord Triesman and his 2018 chief executive Andy Anson must fear the most.

The rest of their strategy is being meticulously planned. The messages aimed at positioning English football ahead of its likely closest rivals in Spain, Australia and the United States will be precise..

No-one in their right mind is going to try to argue against the aim of getting 75 million children into education when they are currently denied the opportunity. Of course not.

That outcome is the target of Fifa's 1Goal project, launched to a fanfare of publicity by bona fide royalty (and its footballing equivalent) at Wembley stadium last week.

Gary Lineker stood alongside Queen Rania of Jordan (the 75th most powerful woman in the world, according to Forbes magazine) and hammered home the message that education should be a birthright.

They also emphasised that governments which had committed to the United Nations' Millennium Development Goals should now make good on promises to give all children an education by 2015.

The 1Goal project is focused on next year's World Cup, so expect to see it promoted around the stadiums in South Africa and to hear its advocates - such as Britain's most cerebral footballer, David James - talk about why you should be signing up to support it.

This must be an awful time for Caster Semenya, brought up as a girl and a woman, but now facing the possibility of being told she may not be who she thinks she is.

The IAAF has to leave the potential psychological effects of this to one side for now and let the scientists deliver their verdict on the 18-year-old South African who came from nowhere to become World 800m champion.

Gender testing is a complicated business. Basically, if questions are raised there are four main elements to consider: anatomy, physiology, chromosomal makeup and genetic composition.

Those who think it's a simple case of a naked parade, as was the norm when gender testing first happened in sport in the 1960s, are much mistaken, but anatomy is the obvious starting point.

The Board of Control for Cricket in India (BCCI) is pursuing a high risk strategy in its refusal to adopt the World Anti-Doping Agency (Wada) code, and its support of its leading players who apparently don't like the idea of being held fully accountable for what's inside them all of the time.

It's hubristic to say the least for India's top players, Mahendra Dhoni, Yuvraj Singh and co to claim their security and human rights are more threatened by the demands of the whereabouts system than say Tiger Woods or Roger Federer. Golf and Tennis, however reluctantly, have seen the arguments for a common anti-doping system, and have signed their sports and top players up to it.

To have to give your whereabouts for an hour a day, 365 days a year strikes me as being a reasonable request given the sums of money India's cricketers earn, the example they're supposed to set for their nation's youth, and the bigger picture of sport accepting collective responsibility for sending out a strong message about drug taking and cheating.