So it's official. Mark Cavendish is coming to Team Sky! And I'm really happy with the news.

Most of us on the team, the Brits anyway, knew Cav wanted to come and it was just a matter of his representatives agreeing a deal. As far as I'm aware, it wasn't about Cav trying to get a load of money, which seems to be the opinion of some.

Of course, Cav will change the dynamic of the team. He is a strong character, as I'm sure you are all aware, but he is also a great leader. Sometimes he comes across as arrogant but he is a nice guy and certainly appreciates all the help and sacrifices his team-mates make for him.

I don't think his arrival will change my responsibilities within the team too much. I will still have a key role to play, especially in the Classics. And whenever it comes to a sprint finish, we always try to set up our sprinter, so why not lead out the best?

However, having the fastest man in the world in the team will put more pressure on us to make an impact at the start of stages now. This year, we lent a hand to the chase at times but we didn't take a lead because we did not have an out-and-out favourite for the sprint. That changes now! 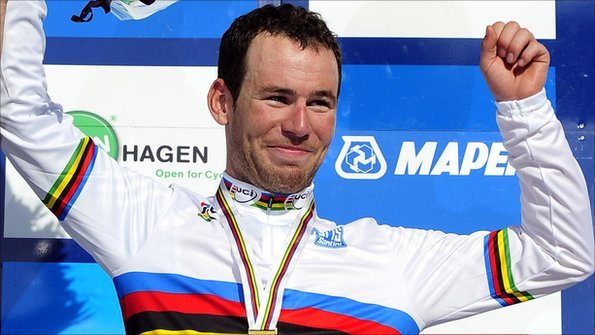 Cavendish shows off the rainbow jersey after his men's road race win at the World Championships. Photo: PA

Cav's presence will also affect the way we approach theTour de France. In the last couple of years, we built the team around Bradley Wiggins and focused on winning the General Classification. Now we need a lead-out man or two for the sprints.

I think we can accommodate Brad and Cav in our Tour de France team as a lot of our riders can do a mixture of jobs. For instance, this year's Tour line-up included myself and Edvard Boasson Hagen. We can lead out Cav at the finish and we can also climb to help Brad.

Christian Knees and Juan Antonio Flecha can ride all day on the flat or climbs, too, so I don't think we need to take too many out-and-out climbers. As long as Brad is protected until the final climb, there is not a lot we can do after that.

It is definitely going to be a challenge with both Brad and Cav in the team but one I think we can meet. And if Cav wins two or three stages, it will take a lot of pressure off.

There is that old cliché that success breeds success. I'm a firm believer that if Cav is winning the biggest races on the calendar, then confidence will spread through the team.

Just look at how the team has grown over the last couple of years. Cav's arrival, along with a host of other strong riders, is only going to build on that.

One of the other new signings is Cav's best mate, Bernie Eisel. He is a great rider and 'road captain' and will add to the experience in the team, which will be vital given that race radios are not allowed next year.

All in all, these are very exciting times for Team Sky and I can't wait until next year!

Hi, I'm Geraint Thomas and I cycle for a living. That's helped me win Olympic gold and travel the world. I've also suffered a few injuries, the worst being a ruptured spleen in Australia in 2004. I was born in Cardiff, turned professional in 2007 and I'm now a member of Team Sky. In 2008 I won Olympic Gold for GB in Beijing in the team pursuit and was awarded an MBE as a result. I've also competed in the Tour de France and am hoping to win gold again at the 2012 London Olympics. I'll be sharing my thoughts in the run-up to, and during, the Olympics, and answering a selection of your questions. Here are some tips on taking part and our house rules.

You can stay up to date with Geraint Thomas's blog via these feeds.