Changes at the top for London and Huddersfield

One week, two coaching casualties and neither a massive surprise. Rob Powell has had the look of a man fighting a losing battle at London Broncos for months, while Huddersfield Giants' alarming slump since coach Nathan Brown's move to St Helens was made public has triggered his predictable early release.

There was more pressure on London - and Powell himself - than ever before this season. The club's bold decision to spend up to the salary cap with a host of new signings needed to be justified with an immediate upturn in form.

The hope was that the Broncos' ongoing battle with poor crowds would be boosted by a more successful on-field product - a winning team. Big-name arrivals Shane Rodney, Michael Robertson and Craig Gower have failed to lift the capital side's fortunes and, with just three wins to their name, the writing has been on Powell's wall for some time.

He is one of the good guys in the game, thrust into the spotlight as Super League's youngest coach, but struggling with the size of the task that is assembling a winning rugby league team in London.

Chairman David Hughes, with his money on the line, had to do something to counter what he describes as an "unacceptable" season and the short-term fix is to fly former coach Tony Rea back from Australia.

Rea has a long affinity with the club and has maintained good dialogue with the Broncos. He says he was shocked to be asked to take over, but it is something Hughes had been considering. 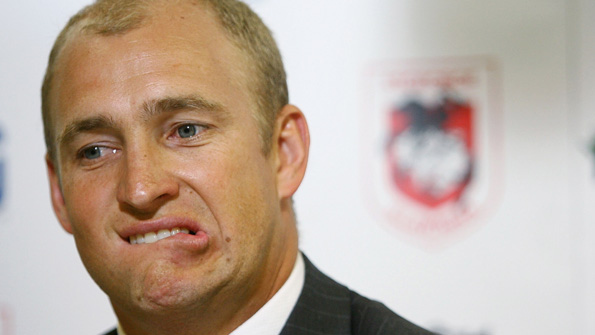 Given the financial outlay and the constant struggle to justify London as a viable Super League option, Powell has paid the inevitable price for failure.

I am not convinced Powell would have agreed with the club's hierarchy over its decision to take two home games on the road in May. London played Bradford at Leyton Orient's Brisbane Road ground and then Hull FC in Gillingham two weeks later... and lost both.

The Bulls had a shorter trip to the stadium from their hotel than the London players, who felt it had become an away game. The plan was to attract new fans of the team away from the Stoop, but I'm not sure the move proved a hit with coaching staff and players.

As for Brown, the decision to remove the St Helens-bound coach looks a no-brainer. After claiming he had succumbed to player power in his selection and strategy in Huddersfield's Challenge Cup semi-final defeat to Warrington, there was no way back.

It was clear all was not well when full-back Greg Eden arrived for an interview straight from training to ask if I still wanted to go ahead with filming as he had been dropped from the team.

Prop forward Eorl Crabtree was asked on Saturday whether the side's dreadful dip in form was the result of a departing coach taking his eye off the ball and that surely he was now focusing efforts on player recruitment for St Helens rather than building at Huddersfield?

Crabtree rubbished the suggestion, calling it an "easy answer" to the side's current woes.

The facts are stark, though. Huddersfield were top of Super League when Brown's departure was confirmed in April and absolutely flying on the pitch. The Giants went undefeated through April but have only beaten London since in dropping to seventh in just two months.

The players are adamant all is well in training, with things just not clicking on the pitch. Paul Anderson, who has stepped up to the top job after previously being the assistant, now has the big task to make sure that happens and salvage a place in the end-of-season play-offs that had previously seemed a certainty.

And St Helens must now decide whether to bring Brown in early or allow interim boss Mike Rush to finish the season.