There are few weekends I look forward to more than the Carnegie Challenge Cup semi-final one.

That's partly because my idiotic mates often schedule their weddings for the weekend of the final itself, but largely because the dangling of the Wembley carrot to four clubs at two neutral venues triggers great sporting drama.

Yet this year more than ever, the magic takes place amid a backdrop of misery over the distinct possibility that one of the competition's most successful teams could soon cease to exist.

Bradford Bulls, five-time winners of the sport's most famous knockout competition, may have been handed another stay of execution in their desperate fight to stay alive. But hope and time are fading.

On the face of it, the extension of their liquidation deadline to 27 July and ongoing talks with a local consortium offer fresh hope. But in reality the situation is deeply depressing for any rugby league fan.

I am a hugely passionate supporter of the game but am not enjoying this season one bit. Amid the usual bluster and positive watchwords offered to the media from Bulls administrator Brendan Guilfoyle this week was the admission that investing in a rugby league club is not an attractive proposition. 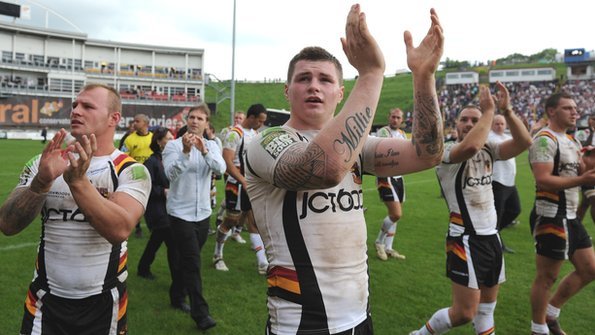 Administrators have extended the deadline for when the club needs to have a new owner. Photo: Getty.

The consortium of local businessmen with whom talks are continuing is, according to Guilfoyle, the only interested party. Other suitors were put off because Bradford are a loss-making business and Guilfoyle admits he is "not in control" of the club's destiny.

The issue here is not finding a buyer who can afford Bradford, but getting one who is willing to cover their losses. Having bought the lease of Odsal, the Rugby Football League now has to agree to sell it back to any buyer, and pay the players' July wages through an advance of TV money.

My concern is that these are shallow kisses of life to resuscitate a potentially fatally wounded beast. The RFL does not have Premier League resources and the desperate demise of the Bulls is further draining the game's central funds at a time when other clubs endure worrying financial times too.

Despite £500,000 being raised by fans and players and the auctioning of treasured memorabilia from the club's glorious past, Bradford have still had to hold a massive stock clearance of £50,000 worth of club shop goods just to raise cash for day-to-day running costs like travel for a coaching staff already working for free. If clubs like Bradford are a loss-making business, why would anyone want to invest?

Thankfully the players are doing their bit and the on-field product remains hugely watchable. I cannot wait for this weekend. Both semi-finals, Leeds v Wigan on Saturday and Huddersfield-Warrington on Sunday, are live on BBC Television and on the BBC Sport website, while we will have the first match live in full on 5 live sport.

With the aforementioned dark clouds overhead, the presence of a Wembley weekend in August is a hugely exciting incentive and all the players I've spoken to this week are buzzing.

For a rugby league player there is quite simply nothing like a Challenge Cup final at Wembley. That one moment when you walk out to the strains of Abide with Me, with your family in the stands and the world watching, is what any player strives for.

And now four sets of team-mates are just 80 minutes away from experiencing it together. On that Saturday afternoon at Wembley, worries over club finances, the licensing system, administration, liquidation, promotion and relegation will be a million miles away from anyone's thoughts.

It is a hugely special day and one that makes semi-final weekend such a massive moment in the rugby league calendar. For a team like Huddersfield, inexplicably stuttering after a strong Super League start, Sunday could be do or die for their season.

I went down to the Galpharm on Wednesday to see Greg Eden and Luke George, both of whom admitted this was their big chance to save the season.

Eden emerged from the tunnel looking gutted after a training session and told me he feared he had been dropped. The look in his eye was of a man who could see his personal Wembley dream fading. "I hope I'm wrong but I have a bad feeling," he told me.

Opponents Warrington have momentum and the hunger of a side to win at Wembley two years out of three - and they want "their" trophy back from Wigan who beat Leeds last year. The Rhinos were wounded by that, but used the setback to trigger an incredible and unlikely play-off run that yielded a barely believable Old Trafford triumph.

For all their Super League dominance, Leeds fans want the Cup that has eluded them since 1999. The Warriors want to build a dynasty.

This weekend is a huge window for a game that has been fire-fighting negative headlines this season and two blood-and-thunder semi-finals live on terrestrial television, radio and online would provide a major shot in the rugby league arm.