I feel like I have written and spoken about nothing but refereeing and respect over the past fortnight. And each time I discussed the issue of officiating in football, I found myself wanting to say: "I don't want to always bring it back to rugby but..."

Let's face it, rugby league is a sport where players behave and officials are respected - on the whole. You rarely see a player mouthing off to an official. If you do, then he is swiftly removed from the pitch. When was the last time a bunch of rugby players surrounded a ref thinking such intimidation may reverse the decision? They accept the situation and get on with it. Some players even still call the official "Sir".

Yet is it fair to compare referees in football and rugby league? 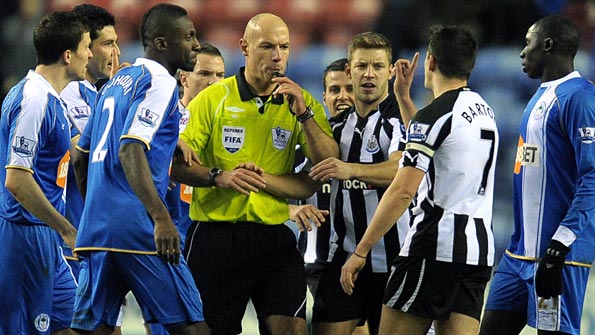 As I packed my kit for last week's Football Association seminar, I received a phone call from Stuart Cummings, rugby league's head of referees. A former Super League ref himself, he told me he had almost called into a recent BBC Radio 5 live discussion to explain how football can learn from rugby in terms of player attitudes towards officials.

Cummings believes another reason why players are better behaved towards officials in rugby league is because there are fewer referees. According to Cummings, players know all the referess and treat them as workmates. In contrast, there is a bigger pool of referees in football, so players get less chance to build a rapport.

"Our players are more down to earth and sense the role a club plays in a community," added Cummings. "I'm not sure footballers do. They are more, for want of a better word, mercenary. I'm not sure they care so much about how their club is portrayed."

But what about the actual act of refereeing? Do rugby refs go about their business in a way that commands more respect from players, a manner of refereeing that is perhaps employed less in football?

"We place a lot of emphasis on talking," Cummings told me. "The rugby league ref is constantly talking to individuals and players in both the scrum and defensive line. I don't think it happens so much in football because the referees don't really have the opportunity because of the flow and shape of the game."

I put this point to FA bosses while training to be a football ref last week. "Maybe he [Cummings] has a point about the flow of a game and opportunities to chat to players," said Roger Vaughan, a national referee manager. "But communication is one of the key skills we instil in our referees, so it would be wrong to say we don't value it highly."

Cummings, a football fan as well as the Rugby Football League's chief of referees, also wishes the 11-man game would place more responsibility on team captains to keep players in check. "Why not give the captain the responsibility to sort his players out before the referee steps in for repeat offences?" he said. "It works well in rugby league."

Again, this is an argument I struggle to disagree with. But there is one key difference and it is something I have been banging on about on about for weeks. There is no middle ground for the football ref. It is either a warning or a dismissal, a yellow or a red card.

Sin-binning is a hugely effective deterrent in rugby league. Playing 10 minutes with a man down is a big setback. It also leaves the offender to reflect on his behaviour and the fact that he has cost his team-mates.

"I think the sin bin would work in football," said Cummings. "They need an interim sanction, like a 10-minute sin-binning. I'm convinced that it would work. There might be quite a few incidents at first but it would soon work itself out."

Myself and Cummings are both rugby league supporters, so I am aware that most of this conversation may sound like two rugby men putting the football world to rights. But we are both footy fans, too, and I have played far more football than I have rugby league.

If football does have a problem with the Respect agenda, why on earth does it not look to other sports that could offer advice? Could it be the case that football regards itself as the king of sports and does not need advice from elsewhere? I put this to Cummings.

"I absolutely think that's the case," he said. "They are arrogant. I've met with football referees to compare notes and some are really good guys. But a lot of them appear very aloof and just don't want to know. You can't tell them anything."

Cummings also wonders why football is reluctant to embrace video technology. Ah yes, the question of video technology. It may be viewed with real apprehension by the football authorities but it has been a success in rugby league and cricket.

"As a football fan and a rugby league ref, I get frustrated a lot, mainly with the technology issue," said Cummings. "I don't buy the issue of video replays making the game less fluid. After a goal, everyone sees countless replays before the game kicks off again. Why not just check if a goal is offside while the players are celebrating? That would be great theatre and take some of the pressure off the referee."

So will football ever take note? "On technology? I don't think so," said Cummings bluntly.
"Football referees won't even wear a microphone because they are paranoid about something being heard that comes back to haunt them. How can [football] educate their refs when they don't even hear what goes on?"

It was refreshing for me as both a rugby league journalist and amateur footballer to hear the head of referees from one sport speaking so passionately about an issue that affects another. Rugby league is by no means perfect, of course, and could learn a lot from football. Then again, they could learn plenty from each other.