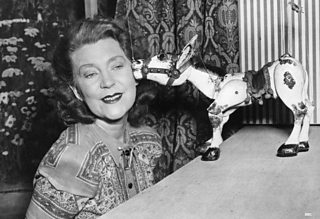 Annette Mills poses with her friend Muffin the Mule in 1947.

The art of the puppeteer is an ancient one, so it is not surprising that this form of entertainment has a long history in broadcasting. Puppetry can be string puppets (marionettes), glove puppets, or other forms such as rod and shadow puppets. Most of those seen on television have been in the first two categories.

Other than Punch and Judy shows and the occasional item in Children’s Hour, there is little sign of puppetry itself being performed on sound radio – that may sound obvious, but it was far from unknown for the most unlikely, and seemingly visual subjects to be featured on the wireless in its early days (such as conjuring and snooker…). It was not until the advent of television, which began experimentally in 1929, that puppets began to feature in programmes properly. On 14 May 1930 the London Marionette Theatre gave the first known television puppet show (though television performers were not billed in Radio Times at that time), and further appearances by this troupe included a puppet version of the Pirandello play The Man with the Flower in His Mouth in 1931. The only other puppet companies to appear in the low definition television era (1929-35) were A.R. Philpott’s Pantopuck Puppets, and Signor Podrecca and his Marionettes, who made an unbilled appearance in 1934.

One of the puppeteers with the London Marionette Theatre was Jan Bussell. He formed Hogarth Puppets in 1932 with Ann Hogarth, and they subsequently married. Bussell became a BBC television producer, and began televised puppet shows in 1937, with the Hogarth Puppet Cabaret, although several other puppet companies were broadcast as well before the Second World War. During this period there were no regular children’s programmes on television, but there were performances of puppet shows for adults as well.

When television returned after the war, children’s programmes were a regular part of transmissions from the start. The first post-war edition of For the Children, on 9 June 1946, included The Hogarth Puppet Circus. Muffin the Mule, the Hogarth Puppets’ most famous character, made his first credited appearance on 20 October 1946 in a programme presented by Annette Mills. Muffin was originally created in the 1930s by puppet maker Fred Tickner for a Hogarth circus item, but did not originally have a name. Annette Mills, the sister of actor John Mills, was a pianist, singer and composer – she wrote the famous Muffin theme song. Muffin was one of the first stars created by television, and one of the first TV characters to be exploited with merchandising.

From 1952 to 1955 the Muffin the Mule episodes were all pre-filmed by an outside company. Annette Mills’ involvement ended with her death in 1955, but Muffin began to appear for a while on ITV after that channel’s debut later that year. However in 1957 Muffin came back to the BBC for a while, in a short series of live episodes, where Muffin’s collaborator was Jan Bussell. 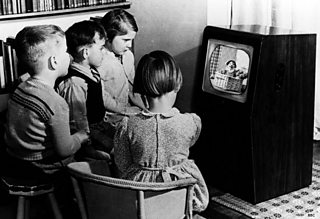 Some children watching Andy Pandy in the 1950s... (though we suspect the image on the screen has been added later!)

The success of Muffin encouraged the creation of further puppet characters in quick succession. From the same stable (as it were) as Muffin was Prudence Kitten (unlike Muffin, she was a glove puppet), who first appeared in 1950. Prudence made regular appearances throughout the 1950s, with Molly Blake, Annette Mills’s daughter, taking over the presentation from her mother in the later episodes.

Between 1950 and 1955 came the debuts of Andy Pandy, The Woodentops, the Flowerpot Men, Rag, Tag and Bobtail and Picture Book, which became the five weekday inhabitants of a new slot called Watch with Mother. This was created by the Head of the BBC Children’s department, Freda Lingstrom, naming it in parallel to the radio series Listen with Mother. The title Watch with Mother came in during 1953, but was heralded at the end of the previous year, in a Radio Times article outlining the plans for young children’s programmes.

Andy Pandy made his first appearance on Tuesday 11 July 1950, as part of an experimental run of four programmes. The narrator was Maria Bird, who also wrote the script and music, and designed the sets. In the first few episodes Janet Ferber sang the songs, then Gladys Whitred took over. The first puppeteer was Audrey Atterbury, and the puppet of Andy Pandy was based on her son Paul (in later years one of the experts on Antiques Roadshow). In later episodes she was joined by Molly Gibson, to help operate Andy and his friends Teddy and Looby Loo.

The early Andy Pandy programmes were live, but it was eventually decided to telerecord the episodes – that is to film the episodes from a TV screen so they could be repeated without having to perform them again. At this time drama programmes were not allowed to be recorded because of objections from the actors’ union Equity, but his did not apply to puppet shows. However early telerecording (or 'telefilming') did not give very good results, and in 1952 it was decided to go the whole hog and film the episodes properly. This meant that the original episodes of Andy Pandy all survive today – except the first four episodes which were remade in 1957. 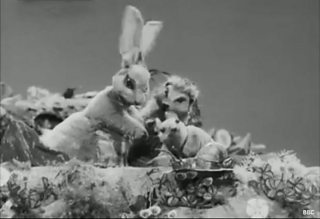 Rag, Tag and Bobtail - Rag was a hedgehog, Tag a mouse, and Bobtail a rabbit - were a Watch with Mother staple until 1965

By late 1955 every day from Monday to Friday had a different, filmed, Watch with Mother programme. Flower Pot Men (aka Flowerpot Men, and oftern referred to as "Bill and Ben") began on 18 December 1952. The series was based on characters created by Hilda Brabban, which had first appeared in Listen with Mother in 1951. The stories were narrated, and the main characters Bill and Ben voiced by, Peter Hawkins, in a nonsense language he devised called Oddle Poddle.

On 1 September 1953 a live programme called Watch with Mother was broadcast in the evening on BBC television, in which Freda Lingstrom and Maria Bird presented excerpts from Andy Pandy, Flower Pot Men and a new show, Rag, Tag and Bobtail, which began transmitting on 10 September 1953. Rag, Tag and Bobtail was narrated by Charles E. Stidwell, and later David Enders and then James Urquhart, and used different puppeteers, Sam and Elizabeth Williams – because its characters were glove puppets rather than marionettes.

Picture Book was the next to arrive, on 14 February 1955, and was the only early Watch with Mother programme with a human presenter. Patricia Driscoll was the first host, replaced by Vera McKechnie when a new batch of episodes was made in 1963. In some of the first run of Picture Book, there were guest appearances by puppets from the other shows, like Andy Pandy and Bill and Ben. The Woodentops, debutting on 9 September 1955, completed the set of Watch with Mother titles. It was an everyday story of (wooden) country folk, and like Flowerpot Men, the original black and white films were still being shown in the early 1970s.

Both Muffin the Mule and the Watch with Mother shows cemented their place in the history of children’s television and made sure that puppets would be a well-remembered feature of television of that era. But the story of puppets was far from over, and there were many other puppet stars, both in that era and in the years that followed – but their story will have to wait for another day…

And now... the news in colour

Flashback to the 1980s: Behind the scenes of BBC TV