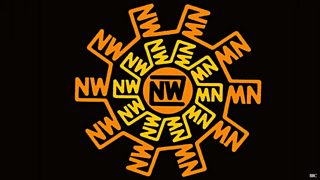 Nationwide, the early-evening BBC1 current affairs magazine programme, can be seen as very much of its time.  Like parkas, chopper bikes, and brown-and-orange wallpaper, Nationwide is forever associated with a particular era in the country’s history – the 1970s.

With the coming of ITV in 1955, which originally consisted of a number of regional companies rather than a single central broadcaster, it was only fitting that the BBC should also reflect its regional audiences.  From 30 September 1957 there was a five minute regional news bulletin between the early evening national news and the magazine programme Tonight (plus an extra five minutes in Wales, for news in Welsh).  Over the years these bulletins expanded in length and became an essential part of the regular BBC news offering, but the items on them were rarely seen outside their original region.

There was a feeling that there was a gap in the BBC’s output for an early evening show, and a need to more strongly reflect the non-metropolitan side to Britain, so in 1969 the Corporation combined its regional news magazines with a new networked programme which would show regional items to a wider audience, and which could also get regional input on any national issues or stories that were being covered.  In some ways its approach would be similar to Tonight, which had finished in 1965. 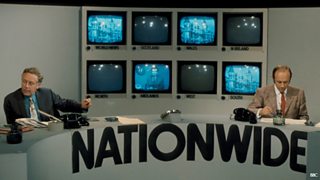 The programme was extensively piloted under the title Britain at Six, but it went out under the new title of Nationwide – reflecting its remit more clearly.  The anchorman was to be Michael Barratt (alongside John Tusa at first), a former reporter for Midlands Today, Panorama and 24 Hours.  The first edition was broadcast on 9 September 1969 at 6pm, with very little fanfare, but the series was soon to become an essential part of many people’s early evening routine.  From 1969 until 1972 Nationwide was only broadcast on Tuesdays to Thursdays, but then it expanded to cover the whole week.

One effect of the success of the programme was the widening of the profile of regional presenters, many of whom were not well known outside their own region, and several developed national careers on the back of it.  The London region, curiously, had its local programme broadcast from the same studio as the networked main programme, and until 1981 it too was just called Nationwide.

Nationwide became known, as well as its general topical coverage of issues of the day, and its regional input, for a range of regular features within it.  These included the Consumer Unit, Watchdog (which has gone on to have an existence of its own continuing to the present day) and Pigeonhole.  All these had an element of consumer affairs, and to some extent this overlapped with That’s Life.

The series also had numerous episodic series of filmed reports on a variety of subjects, such as an exploration of Offa’s Dyke, or the workings of the House of Commons, and the groundbreaking Down and Out, where reporter Tony Wilkinson lived rough in London for a month – exposing a world that few people at the time knew about.  Many of these series were shown as compilations in the summer months, replacing live editions of Nationwide.

A keynote of Nationwide was its breadth of scope, with everything from cookery competitions to the quest to find a new Christmas song and sponsoring the British Rock and Pop Awards;  it looked back with nostalgic features about past decades and into the future with youth-oriented features – though its early interview with the Sex Pistols lacked the controversy and colourful language of their appearance on rival ITV show Today.

The programme was known for light-hearted items, and film reports such as the infamous Skateboarding Duck, or the studio item about a beer-drinking snail have passed into legend.  The programme had its moments of real seriousness,  however by and large it had a family-friendly, personal interpretation of things, given its timeslot, and left the deeper political analysis to sister shows such as Panorama.  This approach changed in the late 70s, by which time Michael Barratt had moved on. 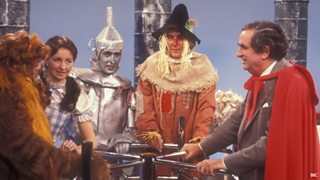 Sue Lawley and colleagues (extra points if you can name them) attempt to discuss the economy with Denis Healey during the Nationwide panto, 1977

Presenters such as Frank Bough took his place (though Bough had been part of the presenting team since 1972), and by the turn of the decade David Dimbleby and Richard Kershaw moved over from Panorama to give a more news-oriented take on things.  Among the other regular contributors over its lifetime were Bob Wellings, Su Cook, Sue Lawley and Hugh Scully.  Richard Stilgoe and Valerie Singleton provided much of the consumer coverage, and latterly Stilgoe appeared alone with the feedback slot Pigeonhole.

As a daily show, broadcast at a time of day when the whole family might be watching, Nationwide had to strike a balance between covering news events that might be upsetting and not offending its audience.  Live television has its inevitable perils however, and there was a controversy when the journalist Peregrine Worsthorne used the ‘f’ word during an edition in 1973.

Live interviews were a common feature however, whether in the main studio or ‘down the line’ from any part of the country – as long as the participant was near enough to a BBC studio.  Several different participants in a discussion could be linked in this way from different regions, which gave Nationwide a particular technical complexity on top of the stresses of live television.

Long running news events like the Northern Ireland situation were of course covered, though Nationwide tended to concentrate on the human interest angle, such as the mid-70s ‘Peace Women’ campaign – still, there was no escaping the cost in lives and damage to property – with the BBC treading carefully in what was a traumatic time for the whole country. 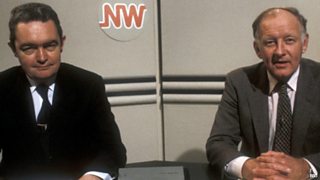 Smaller-scale dramatic news events also provided material, whether one-off occurrences like the Apollo 13 crisis in 1970, the Iranian embassy siege ten years later (although the resolution of it by the SAS came on a bank holiday when Nationwide was not on air) or the Moorgate tube disaster in 1975 – as well as the endless succession of strikes that seemed to permeate the era.  Union leaders and politicians alike made frequent appearances, for example in the regular extended editions covering the Budget.

The Falklands conflict in 1982 was also covered, by which time Nationwide was trying to adopt a harder news agenda.  When Mrs Thatcher was interviewed by members of the public as part of the regular On the Spot feature in the run-up to the 1983 General Election, she was relentlessly questioned by one of them, Diana Gould, about the decision to sink the Argentine warship General Belgrano.  The BBC won no friends at No.10 that day, but the writing was already on the wall for Nationwide.

In 1983 it was decided that the programme should finally come to an end.  With breakfast television having arrived (the BBC jumping in ahead of ITV’s TV-AM with its own Breakfast Time) the news and current affairs landscape was changing.  The final edition of Nationwide was aired on 5 August.

It was decided to incorporate the early evening news, which had preceded Nationwide, into an hour-long programme called Sixty Minutes.  Some features of Nationwide were retained, but it was more London-centric and more tightly formatted, albeit with a breakfast TV-style sofa and relaxed presentation.

Sadly, it did not work out, and after only a year, new BBC1 boss Michael Grade elected to have a half-hour news bulletin at 6pm, followed by a separate half-hour regional magazine, as part of his plan to start all programmes on the hour or half hour in the evening peak hours.  The Nationwide era was finally at an end, its formula has never quite been replicated, and the regionality of the BBC’s output has never been quite so celebrated, even by its - kind-of - successor The One Show.

What are your memories of Nationwide?  Would you welcome more regional content on BBC current affairs programmes?  Or was Nationwide a product of its time that wouldn’t work today?  Give us your views below…