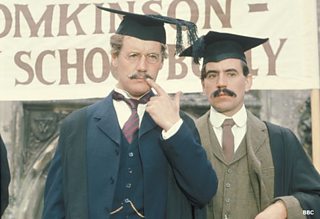 To celebrate half a century of Monty Python’s Flying Circus, Genome indulges in a little light quizzing - how well do you know your Pythons?

2. Which Python wrote linking material for the 1967 series This is Petula Clark?

4. Which Python was married to BBC make-up artist Maggie Weston, who worked on the series?

5. Which Python was the first to appear in the series?

1. Eric Idle – assisted by Lyn Ashley, aka Mrs. Idle. Fun fact – she was a regular in BBC soap opera Compact and appeared in the 1965 Doctor Who story "Galaxy 4" as a Drahvin.

2. Graham Chapman – working with Robert Gray. Most of the Pythons did bread-and-butter writing of linking material for assorted light entertainment shows. Among John Cleese’s first professional writing was material for Yule Be Surprised, a 1963 Christmas special starring Brian Rix and Terry Scott.

3. John Cleese – Cleese and Jay first worked together on The Frost Report (1966-7), to which Chapman, Palin, Jones and Idle also contributed scripts.

4. Terry Gilliam – they’ve been married since 1973. "Mrs. Idle" (see above - but she's actually credited as that) and Connie Booth, then married to John Cleese, both appeared in Python episodes.

6. Terry Jones – one of a smattering of episodes broadcast over the years under that title. Jones also hosted programmes such as Paperbacks, Friday Night... Saturday Morning, and documentaries about the weather and the Crusades.