Patrick Troughton at 100: A Television Actor 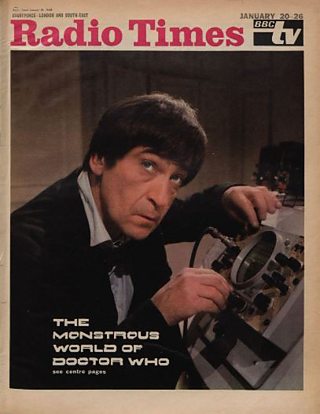 Patrick Troughton was the Radio Times cover star in January 1968, in a still taken from the recent Doctor Who story The Ice Warriors

Patrick Troughton is perhaps best remembered for a role he played originally for just three years – Doctor Who. However, he had a successful career that lasted over four decades, encompassing radio, TV and film.

Troughton, who was born 100 years ago, on 25 March 1920, was much-respected character actor. The bulk of his work was in TV, but he also worked in radio and films. He was less keen on the stage, referring to theatre acting as "shouting in the evenings".

Troughton’s interest in performing began while at school, inspired by hearing actress Fay Compton on the radio. After drama school he won a scholarship to study in Long Island, New York State. When war broke out in September 1939, he was nearly an early casualty when the ship in which he was returning to England was sunk. In 1941 he was called up into the Royal Navy and spent most of his war on motor torpedo boats patrolling coastal waters. 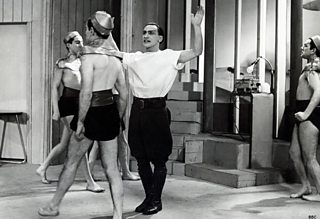 In the 1948 production of RUR (Rossum's Universal Robots), Troughton played the rebellious robot Radius - the original 'robots' were organic, not mechanical...

Although radio continued broadcasting throughout the war, television had closed down in 1939. It resumed in June 1946, and Troughton’s first credit in the medium was in October 1947 in Christopher Marlowe’s Edward II, and the following year he played the robot Radius in RUR – Rossum’s Universal Robots, the play which coined the word 'robot'. While his television appearances became fewer when he joined BBC radio’s drama repertory company in 1951, the next year he was cast as Alan Breck in the 1952 TV adaptation of Robert Louis Stevenson’s novel Kidnapped, and his television appearances became more and more frequent.

In 1953 Troughton was given his first major television lead, as Robin Hood for Children’s Television – which is also his first role for which any material exists. Many other TV credits followed, including the 1956 remake of Kidnapped. When ITV started transmissions in 1955, he appeared in many filmed series for them – including parts in The Adventures of Robin Hood, starring Richard Greene.

An important break for Troughton was the title role in Paul of Tarsus, the 1960 sequel to 1956’s Jesus of Nazareth – a well-remembered production which was still being referenced when he was cast in Doctor Who. The early 1960s saw Troughton take recurring roles in the BBC soap opera Compact, as schoolteacher Mr Miller in Dr Finlay’s Casebook, and as the villainous Quilp in The Old Curiosity Shop. Other parts were one-offs, in series like Z Cars and Adam Adamant Lives!, but he was rarely off the screen. 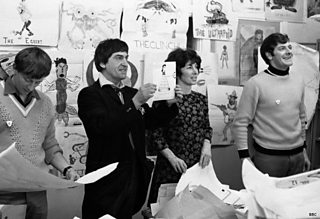 Troughton's most prominent role however came in 1966, when he was offered the lead in Doctor Who, replacing the original star, William Hartnell. Doctor Who began in November 1963 as an attempt to find a regular family programme for Saturday teatimes between Grandstand and record review series Juke Box Jury. Previously a mixture of imported series, comedies (like Billy Bunter) and adventure stories (Garry Halliday, The Chem. Lab. Mystery) had filled the gap. In 1963 the BBC transferred children’s drama to its main drama group, whose head, Sydney Newman, commissioned research into this problem, ending up with a very successful answer.

After three years, despite the huge success of the Daleks, ratings for Doctor Who started to struggle, and the ill-health of William Hartnell posed a quandary – to end the series or reinvent it. Perhaps in part because of Newman’s affection for the programme, the latter choice was made. Shaun Sutton, head of Drama Serials, and producer Innes Lloyd, agreed to offer the part of the Doctor to Troughton – who despite misgivings, accepted.

Troughton worried that being the new Doctor might typecast him and limit future work, especially if the recast series failed to win over viewers, but he decided he could not turn down a regular star salary. He began recording Doctor Who in October 1966, firstly in a brief glimpse at the end of Hartnell’s swan-song The Tenth Planet, as the Doctor regenerated on screen for the first time.

In preparing for the role, Troughton toyed with the idea of wearing outlandish costumes and heavy make-up, so people might somehow not recognise him. Sydney Newman vetoed the more extreme ideas, insisting on what he called a “cosmic hobo” guise. The new Doctor’s costume was a kind of dishevelled parody of Hartnell’s, with loose fitting check trousers, an oversized tailcoat, and spotted bow tie – though both the costume and Troughton’s performance were toned down as he got used to the new role. 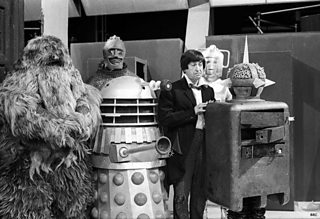 The Troughton era of Doctor Who was known for its memorable monsters - pictured, a Yeti, an Ice Warrior, a Dalek, a Cyberman (behind Troughton) and a Quark

Patrick Troughton’s years in Doctor Who showed that it was feasible to change the lead in the series, and he enabled it to survive far beyond his era - in fact for another half century. His time in the show was also famous for its monsters, like the Cybermen, the Yeti and the Ice Warriors. However Troughton also demonstrated his range in a monster-less story called The Enemy of the World, in which he played a dual role.

In all but one of his stories Troughton was partnered by Frazer Hines, playing Jamie, a Scottish highland warrior rescued from 1746 – Troughton got on well with the actor, with whom he had previously worked in the 1964 historical drama Smugglers' Bay.

From the off, the pressure of work on Troughton in Doctor Who was great. At that time the series was broadcast most of the year round, and episodes were recorded individually a few weeks in advance of transmission. By early 1967 the gap between recording and transmission had shrunk to a week. Even allowing for summer breaks, a similar punishing schedule prevailed throughout his time in the role. Being the star of a high profile series which, while not broadcast live, had few allowances for error, was hard to cope with. 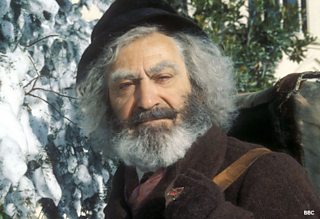 By 1969 Troughton had decided to leave Doctor Who. His worries about typecasting were thankfully dispelled as he was immediately offered the major part of the Duke of Norfolk in the prestigious historical drama The Six Wives of Henry VIII.

Troughton reverted easily to his former existence as a character actor. He appeared in programmes like A Family at War, Doomwatch, Colditz, Z Cars and Angels, and even turned up in Doctor Who’s 10th anniversary story The Three Doctors. He made occasional films – notably The Omen – and continued to perform in radio plays. Later TV roles included parts in Treasure Island, The Feathered Serpent, Nanny, and as the mysterious Cole Hawlings in the 1984 children’s serial The Box of Delights.

After suffering a heart attack, he had to drop out of reprising his role as Quilp in a 1979 production of The Old Curiosity Shop. In time he recovered and resumed his career, returning to Doctor Who in another anniversary show, 1983’s The Five Doctors (and two years later in the story The Two Doctors). In 1983 he was persuaded to attend his first Doctor Who convention – the massive BBC-run celebration of the show’s two decades held at Longleat House. Essentially a private man who previously resisted publicity, Troughton now discovered that he enjoyed attending such conventions, often alongside his successor in the role, Jon Pertwee. While visiting the United States for an event in 1987, Troughton suffered a fatal heart attack. He was 67.

Patrick Troughton’s legacy as one of the first great exponents of television acting is secure. For a generation, Patrick Troughton was their Doctor – but for many others, within and outside the acting fraternity, he was a consummate and admirable performer, who never gave less than his best.

Tales from bohemia: The making of Arena’s Chelsea Hotel

Coming to You Live - The Origins of Outside Broadcast Television