Programmes don't always stick with the same signature tune. After running six years, Match of the Day introduced a new theme in 1970...

They’re rarely mentioned in the programme schedules, but theme tunes are a vital ingredient in programme-making. We take a look at the evolution of signature music, and think about some best-loved examples.

So you’ve got a new television (or radio) series to produce. You’ve got the scripts, the performers, the studio and the designs for sets and costumes. But hang on – what about music? You may want a score to run through the whole production, or not – but what about a signature tune?

Most programmes have a theme tune, whether it’s the news or a soap opera, a documentary series, a sitcom or a costume drama. These pieces of music have been a feature of broadcasting since its early days. They predate it, in fact, from the time when dance bands, singers and stage comedians had a piece of music or a song that identified them and distinguished them from their rivals.

Broadcasting brought its own reasons for signature music. With the constant demand for content to fill the airwaves, it made sense to find formats that would provide series, and that led to using theme tunes to announce them to listeners. Theme tunes "both identify and put you in the mood," stated a Regional Programme listing in 1934: "…nothing [could be] more suitable to In Town Tonight than the exciting Knightsbridge March from the London Suite by Eric Coates." 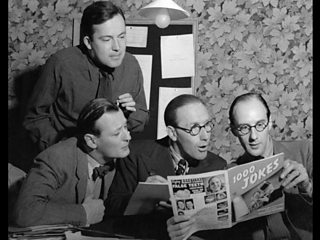 Even in the 1930s, radio drama serials such as Paul Temple made use of catchy music (originally a piece from Rimsky-Korsakoff's "Scheherezade", later and more familiarly "Coronation Scot") and comedies like Band Waggon (1938) and It’s That Man Again (1939) employed the same device. The music was often performed live by an orchestra, and in both the comedies the theme was a song with lyrics setting up the series concept. Indeed the use of a specially composed song has become a staple of theme tune writing over the years, as a way of setting up the show's content - think of Only Fools and Horses.... for example.

The trend for memorable themes continued into the 1940s, with thriller serial Dick Barton – Special Agent, and popular comedy shows like Take It from Here. The 1950s brought Hancock's Half-Hour, with its memorable signature tune by Wally Stott, and of course "Barwick Green", the theme to The Archers, which became, and remains, instantly recognisable.

Television also employed theme tunes from its earliest days - with series such as Picture Page and the light drama Ann and Harold, while most outside broadcasts in the 1930s were heralded by the record "The Eyes of the World are on You" by Louis Levy and the Gaumont British Symphony Orchestra.

The theme for The Sky at Night is from Sibelius's incidental music to Maurice Maeterlinck's tragedy, Pelleas et Melisande

I’ve heard this one before…

A number of successful programmes relied on library music and made certain off-the-shelf tunes synonymous with their brand. Neil Richardson’s "Approaching Menace" is inextricably linked with the famous black leather chair of quiz show Mastermind, while Blue Peter made "Barnacle Bill" a staple of children’s TV through a number of versions. Some series even successfully recycled another programme’s theme tune – for example, the school drama Grange Hill used the library track "Chicken Man", another version of which later introduced the ITV game show Give Us A Clue. More recently the BBC satire W1A employed "Las Vegas", a piece of stock music well-known as the original theme of Animal Magic.

Television has often breathed new life into classical tracks. Monty Python’s Flying Circus brought John Philip Sousa’s "Liberty Bell" to a new audience, while the period drama The Onedin Line used part of Khachaturian's "Spartacus" to great effect. The atmospheric "At the Castle Gate", from Sibelius’ "Pelleas et Mellisande", is now instantly recognisable to viewers of the long-running astronomy series The Sky at Night (although it had previously been used for the 1955 series The Modern Universe).

Much incidental music is composed especially for a particular programme, and so a specially composed theme can be part of that package. It is a more expensive option, but one that produces a tune uniquely associated with the show. Of course, this approach can provide inspiration, with one 1937 programme playing on the idea of the programme title - The BBC Presents the ABC - to produce a perfectly apposite composition: "The signature tune, specially composed by Reginald Foort and Claude Ferring, will be introduced in an ingenious way - a march founded on the letters of the scale…"

One early idea for the Doctor Who theme was to use the French group Les Structures Sonores, who used glass instruments to make ethereal, unearthly music - some of their records were later used for incidental music in the series

Some composers are most remembered, not for their standalone music written for its own sake, but for how they’ve influenced popular culture through the theme music for a favourite television programme. One of the great theme tune composers was the Australian Ron Grainer, whose BBC career began in 1959 as a musical associate for comedian Tommy Trinder’s series Trinder Box. Grainer composed the music for the police drama Maigret in 1960, which resulted in the tune being released as a record, both on a single and on an album of the incidental score. He was thereafter in demand for television themes, becoming the composer for Steptoe and Son and That Was the Week That Was, before, most famously, writing the signature tune for a new science-fiction series - Doctor Who.

They had already produced a number of theme tunes, when in 1963, Doctor Who producer Verity Lambert approached Ron Grainer to produce a signature tune for Doctor Who. He dashed it off at top speed and it was handed over to the BBC Radiophonic Workshop to realise - in the hope that they would produce something suitably futuristic and mysterious.

The BBC Radiophonic Workshop had been established in 1958 to provide music and effects using untraditional means, such as white noise generators, tape machines (altering the speed of sounds, playing them backwards, overlaying and re-recording) and an assortment of junk and random objects to produce new kinds of sound - this was several years before synthesisers became available. When the finished Doctor Who theme was played back to Grainer by the Workshop’s Delia Derbyshire, his reaction was: "Did I write that?" – but it has become one of the best known theme tunes of all time, and after several arrangements over more than half a century, is still in use today.

Some people can't get to sleep unless they have heard the mellifluous tones of "Sailing By", the tune which precedes the Shipping Forecast...

Sometimes theme tunes take on a life of their own. One 2016 poll identified the theme tunes to Match of the Day, EastEnders and Benny Hill as among the top 50 “earworms”, while another 2009 survey saw the theme tune to The Shipping Forecast, "Sailing By", among the most requested funeral music. A good theme tune can become part of popular culture, and as with the Maigret theme a record of it can become a hit.

The theme tune has almost become a genre of music in its own right. Getting a theme that is memorable, that instantly reminds the viewer or listener of the show it is associated is a difficult art, and one that has challenged composers and music consultants and editors down the decades.

Do you have a favourite theme tune? Let us know in the space below…