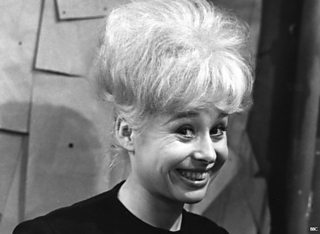 In this age of fake news, the spoof-friendly start of April seems like a particularly good time to take a look at one particular aspect of benign deception, as practiced in the worlds of radio and television: that of pseudonyms, used to disguise the identity of a writer, director or actor, for various reasons.

Actors are particularly prone to having names other than that which they were given at birth. Stage names can be invented just because the actor’s real name sounds a bit uninspiring to them or others, or hard to remember. Another hazard is that it may be the same as that of another actor: Actors’ Equity insist that actors do not have the same name as another working performer, to avoid the danger of confusion, or even deception. If you go to see a play starring that well-known thespian Freda Bloggs, you want to make sure it is that lady, not someone who shares her name but perhaps not her talent.

Occasionally an actor has begun their career before their name has been finalised, for example young Barbara Deeks was credited in a 1953 television relay of the stage musical Love from Judy, but when she next made an appearance, only a year later, she had been renamed the more familiar Barbara Windsor. Her later Carry On (and Six-Five Special) co-star Jim Dale was similarly first billed in the pages of Radio Times as the more mundane Jim Smith. In the same era, The Seventeen to Twenty Club, a Light Programme series in 1959, once played host to a ‘teenage celebrity’ called Gerry Dorsey – later better known as Engelbert Humperdinck.

Sometimes actors can also work in another field, and especially when that field is writing, it’s not unusual for them to use another name. One actor who started out under his real name before he adopted the stage name of David Baron, later became a playwright, and after a shaky start gradually built his literary reputation, in radio and television, as well as for the stage. He often appeared in his own plays, and while in some early radio productions he kept his stage name, when he became fully established he reverted to his real name, now a household one, of Harold Pinter. 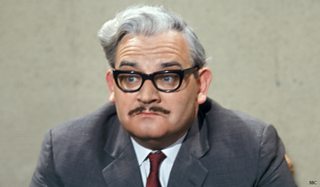 Another literary name which has gradually become well-known is that of Gerald Wiley. Mr Wiley was a contributor of scripts to a number of late 1960s shows, and it was only when the quality was recognised and the cast members demanded to meet this talented man that Ronnie Barker admitted that Wiley was him. Barker used the Wiley name mainly for sketches, but he also contributed sitcom scripts from time to time, using names such as Jonathan Cobbald and Bob Ferris.

Then there is the mysterious career of the actor Walter Plinge. If you look him up in Radio Times you will find a long but not particularly distinguished career. His first credit is in 1929, and his last in 1967, which would be an enviable and respectable career for any actor. That first credit is as David Gardiner in The Mists of Morning, which is described as a sketch. Curiously enough another member of the cast is Ida Plinge, an actress who is never heard of again, at least in the pages of Radio Times. Even earlier, there was a performer called Fred Plinge who collaborated with Walter Weekes in a Plymouth local programme – again this was his only known broadcast…

Post-war Walter Plinge is listed for rather more productions, including regular roles in the serial Rocket to the Stars and a show called Answer Next Week. Work seems to dry up again for a while, and after an occasional job during the 50s and 60s Mr Plinge’s swan song is in The Perfect Fool on 7 May 1967. But don’t worry about him struggling in his old age – Walter Plinge does not exist…

There is a long theatrical tradition of the name Walter Plinge being used in plays, where an actor is playing more than one part, and the management want to make it look as if they have hired someone else for the additional role. There are also instances where an actor does not want to be credited for personal or professional reasons; and sometimes when a character is, for example, mentioned extensively but never in fact appears – the name make the audience believe they will turn up, until at the end it becomes apparent that they will not.

Of course other names can also be used for this ruse. The classic play George and Margaret by Gerald Savory goes to the extreme length of billing the non-appearing characters in the title!  At least when the play was presented on radio and television, there was no question of listing these characters with false names attached.

Walter Plinge has his customary equivalents elsewhere: George Spelvin is the American theatrical version, and Alan Smithee is the preferred Hollywood credit for aggrieved directors taking their name off a film. Credits of convenience have also been used from time to time on the BBC for writers, where for one reason or another their own names cannot be shown on a programme. Doctor Who seems to be particularly prone to this, with Norman Ashby, Guy Leopold, Stephen Harris, Robin Bland and Paula Moore being among the writers with fictitious names. 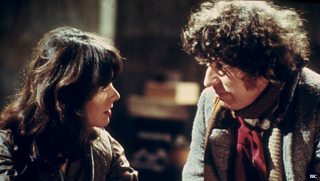 Sarah (Elisabeth Sladen) and the Doctor (Tom Baker) in Doctor Who: The Brain of Morbius - appropriately, given its pseudonymous writer, it has lots to say about the nature of identity...

To their number must be added David Agnew, who as well as having two full credits on Doctor Who serials, almost uniquely had a life away from the series (Norman Ashby also 'wrote' an episode of Warship). Agnew first appears on a Play for Today in 1970 called Hell’s Angel, then on 1975 play Diane, and episodes of police series Target two years later. But Doctor Who would be his swansong.

The main writer behind the pseudonym was Anthony Read, who also worked on oil industry drama The Troubleshooters, and Z Cars. While he was script editor on Doctor Who, a replacement story was needed at short notice, and Read obliged using his usual nom-de-plume. In similar circumstances the following year, 1979, David Agnew was the ostensible author of City of Death – which was mainly the work of Doctor Who’s new script editor, one Douglas Adams. Confusingly, Read contributed one more script to the same season, but now under his own name, after leaving the BBC.

There can be a little wit displayed in a good pseudonym: Gerald Wiley hints at the subterfuge used, and playwright and screenwriter Clive Exton’s occasional pseudonym of MK Jeeves is borrowed from one of WC Fields's scripting pseudonyms, but just using the initials instead of the full original, Mahatma Kane Jeeves.

Another good example is the writer credited for the 1976 Doctor Who story The Brain of Morbius. It was originally written by Terrance Dicks, but major changes were made by the show’s script editor Robert Holmes while Dicks was on holiday and could not be contacted. Dicks later agreed Holmes could put it out under some ‘bland pseudonym’, and was amused to see in Radio Times that the story was duly credited to ‘Robin Bland’.

Names, which we see as so much a part of our identity, can at least in the world of radio and television be a bit more complicated. What’s in a name? as Shakespeare’s heroine, Juliet, asks. Sometimes quite a bit. Other times, nothing at all…

Radio Times from the 1920s - the actual pages