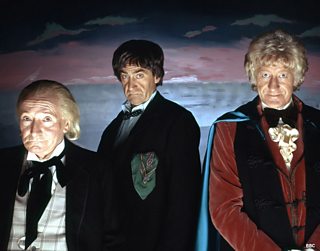 William Hartnell, Patrick Troughton and Jon Pertwee in a publicity still for The Three Doctors (1972/3)

On Sunday 7 October 2018, television history is made with the full debut of Jodie Whittaker as the first woman to play the lead in Doctor Who. Leaving aside doubles, stand-ins, spoofs, and John Hurt in 2013’s The Day of the Doctor, 13 actors will now have played the Doctor on television since the series began in 1963.

William Hartnell was the first of these. He had a long career in films, often playing sergeants and other authority figures. He first broadcast on BBC radio in 1931, while his television debut was in 1953 in an excerpt from the stage play Seagulls Over Sorrento. His next credited BBC television appearance was a decade later, in Doctor Who. Before that his only major TV role was in ITV sitcom The Army Game, playing a sergeant-major. However, it was his role as a seedy rugby league talent scout in the film This Sporting Life that inspired producer Verity Lambert to cast him as the Doctor.

Hartnell was succeeded by Patrick Troughton in 1966. Troughton’s long television pedigree began with Christopher Marlowe’s Edward II in 1947. A few months later he appeared in RUR (Rossum’s Universal Robots), the play which introduced the word “robot” to the English language. Troughton’s major TV roles included the 1953 version of Robin Hood, religious drama Paul of Tarsus, and Quilp in The Old Curiosity Shop. After turning down a supporting part in Doctor Who in 1966, his final role before becoming the Doctor was in fantasy series Adam Adamant Lives!

Jon Pertwee was the third Doctor, with his debut episode broadcast on the first Saturday of the 1970s. His previous BBC career was predominantly in radio comedy, beginning in the 1940s with Merry-Go-Round, and including Up the Pole, Puffney Post Office, Pertwee’s Progress, and from 1959, The Navy Lark. His first television appearance was compering a 1946 variety programme, Little Show. Pertwee was known as an entertainer and voice artist more than a straight actor, and when cast as the Doctor and advised to “play himself”, he confessed that he wasn’t quite sure who that was. 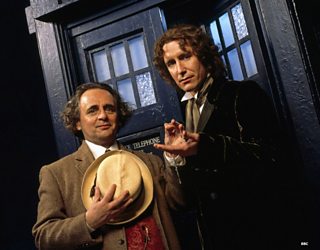 When Tom Baker took over the role of the Doctor in 1974, he might have known who he was but most of the public didn’t. Ironically he has been closely identified with the part ever since, having played it longer than anyone else. Baker’s first BBC credit was in Dixon of Dock Green in 1968, and he made a handful of other TV appearances pre-Doctor Who, most notably opposite Maggie Smith in the 1972 BBC production of The Millionairess.

When Baker finally left the series in 1981, his replacement was Peter Davison, famous from the veterinary drama All Creatures Great and Small. Davison took the advice of his predecessor Patrick Troughton not to stay for more than three years. He was the first Doctor to have grown up with the show, and would go on to be the father-in-law of a future Doctor, David Tennant.

Colin Baker followed Davison in 1984, but his tenure was to be one of the shortest. He was the first Doctor to have appeared in the series before, as a guard commander on the Time Lord planet Gallifrey. Baker was best known from contemporary BBC drama The Brothers, but many of his earlier BBC appearances had been in period pieces, beginning with The Roads to Freedom in 1970. He also made a notable guest appearance in sci-fi series Blake’s 7.

The next Doctor, the last of the "classic" era, was Sylvester McCoy (aka Sylveste, early on). His performing career began with Ken Campbell’s Roadshow, a company of entertainers including Bob Hoskins. In 1974 McCoy joined children’s series Vision On, and he later appeared in Jigsaw, Eureka, and Big Jim and the Figaro Club. In 1989 Doctor Who was “rested” by the BBC, but four years later McCoy appeared, along with Jon Pertwee, Tom Baker, Peter Davison and Colin Baker, in Dimensions in Time, a Doctor Who/EastEnders crossover made for Children in Need.

In 1996 a mainly US-funded TV movie of Doctor Who was produced, and McCoy again appeared as the Doctor, regenerating into Paul McGann a third of the way through. McGann is the shortest-reigning “official” Doctor, as his only other television appearance as the Time Lord was in 2013 mini-episode The Night of the Doctor. McGann first appeared on BBC television in a 1982 Play for Today, Whistling Wally, but after co-starring in snooker drama Give Us a Break, he appeared in the controversial The Monocled Mutineer. 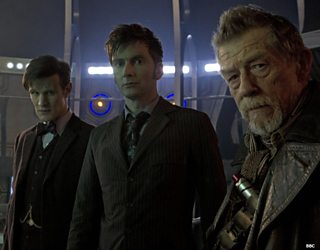 In 2003, the 40th anniversary of Doctor Who, it was finally announced that a new series was in development, which began transmission in 2005. Christopher Eccleston, an actor known for roles in series like Cracker, Our Friends in the North and The Second Coming, was cast as the 9th Doctor, but elected to leave after the first series. He was replaced by David Tennant, whose first full episode was The Christmas Invasion, which established a tradition of regular Christmas Day episodes.

Tennant first made an impact in 90s drama series Takin’ Over the Asylum, however his earliest BBC role was in 1989 play Biting the Hands, by Rona Munro – who also wrote the last “classic” Doctor Who story to be televised, Survival. In 2005 Tennant played the title role in Russell T Davies’ Casanova, and was also in a live remake of 50s sci-fi drama The Quatermass Experiment.

The next Doctor was the relatively unknown Matt Smith, the youngest actor to play the part so far. Smith’s BBC television debut was in Philip Pullman’s The Ruby in the Smoke in 2006, starring Billie Piper, who had just left Doctor Who herself. Smith’s time on the programme included its 50th anniversary in 2013: in the special episode The Day of the Doctor he teamed up with David Tennant and John Hurt (as the “War Doctor”).

When Smith left Doctor Who shortly afterwards, his successor was Peter Capaldi, who was roughly the same age as William Hartnell had been when cast as the Doctor. He was the second Doctor to have appeared in the series before, in 2008’s The Fires of Pompeii. Capaldi too had grown up watching Doctor Who, even having a letter about the show published in Radio Times in 1974.

By 2013 the calls for a female Doctor, begun by Tom Baker when he left over thirty years before, had gone from being treated as a joke to a serious possibility. The next incarnation of the Master, the Doctor’s Time Lord nemesis, was a woman: Missy, as she was known, played by Michelle Gomez.

Jodie Whittaker, who now assumes the mantle of the Doctor, had her first BBC credit 12 years ago, in Alan Plater’s play The Last Will and Testament of Billy Two-Sheds. She was also in BBC period dramas Tess of the d’Urbervilles and Cranford, but her most prominent role was in ITV crime drama Broadchurch, written by the new Doctor Who showrunner Chris Chibnall.

Of course, true Doctor Who fans know that Jodie Whittaker is not the first woman to play the Doctor. The Curse of Fatal Death, shown in 1999 as part of Comic Relief, was an affectionate spoof written by Steven Moffat, with Rowan Atkinson as the Doctor. At the end of the story the Doctor regenerates successively into Richard E. Grant, Jim Broadbent and Hugh Grant – and then finally into Joanna Lumley…