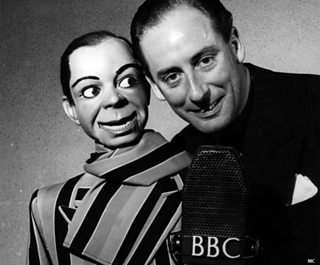 Ventriloquism was highly popular in the 1950s, largely due to the success of Educating Archie, starring Peter Brough (right) and Archie Andrews

Ventriloquism, sometimes erroneously called the throwing of voices, is an ancient art which was originally used in religious rituals (and still is in some parts of the world).  But it is better known as a comedy act, much used in music hall and variety, and like many such skills it transferred over to television – and also to radio.

Radio ventriloquism seems an odd idea:  that a skill requiring the performer to appear not to be speaking, while the doll does, could work on a medium where the majority of the audience – the listeners at home – cannot see if the performer is actually capable of the feat.  But the fact that some of the most popular exponents were big stars on radio shows that it’s not just about the technique, it’s about interacting with a compelling character, the dummy not just being a distraction from the skill being used (or not) but a personality in their own right.

From its ritualistic beginnings, gradually the custom arose, as ventriloquism became a stage act, of using a doll to be the supposed source of the voice.  People once thought that the performer was speaking from the stomach, which is the literal meaning of ventriloquism – but the skill is actually in the control of the diaphragm, as with a trained singer.  That, and the ability to fool the audience into thinking that the dummy is real…

By the start of the 20th century dolls were increasingly sophisticated with moving mouths, eyes and other tricks.  Ventriloquists appeared on BBC radio from its early days.  Some of the earliest performers to appear include A. C. Astor, Coram (with his figure, as dummies were then known, Jerry), Johnson Clark, and Arthur Prince, who dressed as a naval officer, as did his doll Jim.

The programmes they appeared on tended to be variety shows, as with stage variety there would be a mixture of singers, dancers, comedians and speciality acts – the latter could be acrobats, jugglers, ventriloquists or anything else that did not fit a neat category.  The limitations of radio did not necessarily prevent visual acts from being used on radio.

One of the first big star vent acts was American, Edgar Bergen and his doll Charlie McCarthy.  Bergen became a big star in the States, and his shows became better known in the UK during World War Two, when American programmes were first bought in by the BBC to help entertain US servicemen based here.  It also had the effect of educating artists and public alike in a faster-paced, snappier style of comedy.  Bergen’s British equivalent was Peter Brough, whose partner Archie Andrews starred with him in Educating Archie throughout the 1950s. 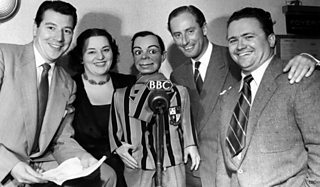 Peter Brough and Archie had appeared in the series Navy Mixture, a variety show aimed at Royal Navy personnel, from 1944, after Brough had been invalided out of the services.  Brough featured in various other radio programmes as well, and made his first appearance on television in Close Up, in December 1946, though television was never really his medium.  In 1948 he starred in Two’s a Crowd with the impressionist Peter Cavanagh, and continued to be booked for popular radio series like Variety Bandbox, Music-Hall and Workers’ Playtime, until Educating Archie came along in 1950.

The premise of Educating Archie was that Archie was unable to go to school (being different from other boys) so a succession of tutors were hired to educate him at home.  The Tutor role gave a start to many later-prominent comics, including Tony Hancock, Harry Secombe and Dick Emery.  Other performers who appeared included Max Bygraves, Julie Andrews, Hattie Jacques, Beryl Reid, Warren Mitchell, Bernard Bresslaw, Bruce Forsyth and Sidney James.  Benny Hill also appeared in the 1954/5 season which was re-titled Archie’s the Boy, though the title reverted the to the original for the following season.

Writers for the show over its run included Eric Sykes, Barry Took and Marty Feldman (who went on to write Round the Horne in the 60s) and Ronald Wolfe and Ronald Chesney (Chesney started as a harmonica player on the show;  the two Ronalds later wrote the television sitcoms The Rag Trade and On the Buses).

Educating Archie was not really a ground-breaking show, though it employed so many people who went on to greater things, but it was very popular, and funny – naturally, given the calibre of the writers and performers.  In the days before television became the dominant medium, such radio shows were what gave the nation its shared culture, and Educating Archie had its share of quotable catchphrases (“Flippin’ kids” – “I’ve arrived, and to prove it, I’m here” – “As the art mistress said to the gardener”), memorable supporting characters, and the irrepressible Archie himself.

There was an odd cross-over episode in 1954, Archie in Goonland, where the characters from the Goon Show collided with the other show's very different sensibility, although the respective writers Eric Sykes and Spike Milligan were colleagues from their Associated London Scripts agency, and would go on to work on Goon Show episodes among other projects in their life-long friendship.  Another experiment was a television sitcom, but neither a BBC TV one-off nor a whole series for Associated Rediffusion was successful, though Archie and Brough had made numerous appearances on television before.

Peter Brough was the name above the title of the series, along with Archie, but although one of the top acts of the period he was a relatively anonymous presence (perhaps always the fate of the ventriloquist?).  He left showbusiness due to the demands of his family business in the 60s, but made occasional appearances over the years, until his death in 1999. 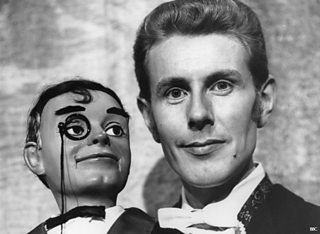 You Silly Ass... Lord Charles and Ray Alan. Alan was also a television presenter and a scriptwriter (under the name Ray Whyberd)

While Peter Brough was known solely for his Archie Andrews character, another ventriloquist who was coming to prominence in the late 1950s had a range of characters – Ray Alan.  Starting as a call boy in variety theatre before trying his hand as a magician, then graduating to ventriloquism, Alan became best known for his Lord Charles dummy, with his trademark kiss curl and monocle, who made tipsily waspish remarks in an upper class drawl.  Lord Charles first appeared with Alan in The Good Old Days in the early 1960s, but was the mainstay of his act for the rest of his life, including numerous radio appearances together.

Alan’s first appearance on the BBC was in Crackerjack in 1956, but he did not return until two years later when he had great success with his character Mikki the Martian.  1958 was near the start of the space age, and alien characters were starting to be more popular – Mikki bore a slight resemblance to the Mekon in the Dan Dare comic strip from The Eagle, with a large bulbous cranium.

Ray Alan kept on with his children’s television work throughout the 60s, with a long list of BBC shows involving his new characters, the schoolboy Tich and his pet duck, Quackers.  Tich and Quackers first surfaced in Time for Tich in 1963.  In 1964/5 there was Tichpuzzle, which featured puzzles and games, then Tich Space Trips, which returned to the space age theme, but was staged at a succession of seaside resorts around England and Wales.

1966’s The Tich and Quackers Show featured musical guests including Sandie Shaw, Adam Faith and Lulu, and was followed by three series of Tich and Quackers, subtitled …Settle down to a Country Life, a sitcom of sorts.  Finally there was High Jinks in 1969, which returned to a variety format, with an audience participation quiz, and musical guests again.

Alan kept on performing until shortly before his death in 2010, and people were always delighted to be reacquainted with Lord Charles, his best remembered character. 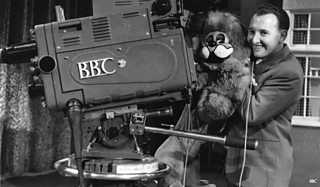 Another ventriloquist who made the big time at the end of the fifties, and confined himself mainly to children’s programmes, was Terry Hall, with his friend Lenny the Lion.  Hall also made an appearance on Crackerjack in its early days, and later had a residency on the series Hopscotch.  By 1956 Hall and Lenny had their own show.  In 1959 there came a variation, Lenny’s Den, then in 1962 Pops and Lenny, featuring music acts, including, in one 1963 episode, up-and-coming Liverpudlian quartet, the Beatles.  After that series however Hall’s appearances became less frequent.

As well as these performers, there were other ventriloquists who saw great success in this period, such as Dennis Spicer, who was sadly killed in a car crash in 1964, and the great Arthur Worsley, whose gimmick was that he never spoke as himself, just as the character of his doll Charlie Brown.

Ventriloquism is a skill that thrived in the era of variety, and by the 1970s it was getting harder for acts to get enough work to keep going.  There had always been some who worked in cabaret with a more sophisticated act, such as the American Shari Lewis, and she appeared frequently on the BBC in her own show from 1969 onwards, with her puppet Lamb Chop.  The Spanish vent Senor Wences was another exotic practitioner of the skill, he sometimes used his own hand as an extemporised doll. 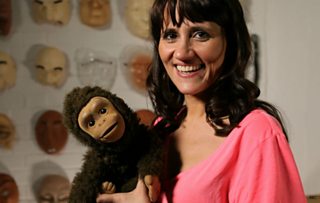 In later years Roger de Courcey and Keith Harris rose to fame, the latter getting a number of series of his own with Orville the Duck, and they also had an unlikely pop hit single which led to appearances on Top of the Pops.  Ventriloquism has perhaps retreated into the niche appeal category in recent years, and while the odd performer such as Nina Conti comes to light, there are fewer places they can practice their art for a radio or television audience.

Outside the realms of Britain’s Got Talent, where the polished and the incompetent rub shoulders in a kind of parody of variety, there seems little chance of ventriloquism achieving the heights of popularity it once had.  Like another half-forgotten art, impressionism, it is not enough to be able to do ventriloquism, the material must be good, both the doll’s characterisation and the script.  It’s hard to imagine that a craft with such a long history will ever disappear, but whether it will ever regain its former prominence is open to doubt.

Do you miss the days of Lord Charles and Lenny the Lion, or do you think we have moved on?  Share your memories of the great days of variety bills, or tell us why they are best forgotten!  Extra points if you can do it without moving your lips, as the art mistress said to the gardener.

The Sunday Post: The US Goes to the Polls