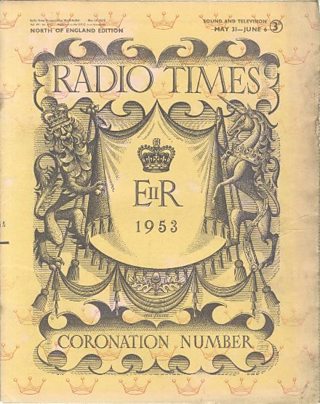 The Coronation of Her Majesty Queen Elizabeth II was celebrated with this rare 1950s colour Radio Times cover, designed by Eric Fraser

Following the release of the magazine pages of Radio Times from the 20s, 30s and 40s, the full pages from the next decade, the 1950s, are now available on the BBC Genome website.

The 1950s was a time of expansion for broadcasting, especially television. The decade saw a wide range of new BBC programmes and technological innovations which took television throughout the UK and beyond. The scope of radio broadened and it was a fertile time for new comedy, drama and features.

Radio Times reflects these changes on its covers and in the rest of its contents, including articles, photographs and artwork, and in the letters pages. BBC Genome users will now be able to read this material from the 1950s. We hope this will help our users to correct some of the errors in the listings, caused as a result of the original scanning of the magazine - as well as learning more about the changes to broadcasting during the decade.

Television from the Midlands began at the end of 1949 with the opening of the Sutton Coldfield transmitter, and the North of England, Central Scotland and other regions followed. By Queen Elizabeth II’s Coronation in June 1953 the largest population centres of the UK were covered, and for the first time the television audience for an event outstripped that of radio. The Radio Times magazine brought news of these developments to its millions of readers. 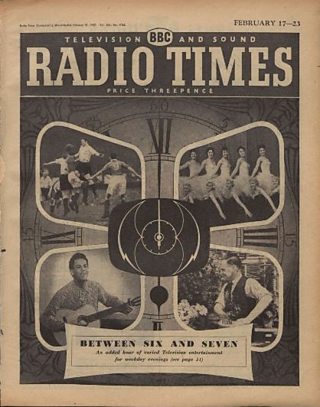 This February 1957 Radio Times cover heralds the end of the "Toddlers' Truce" when television closed down for an hour between six and seven p.m.

Outside broadcasting was perhaps the most adventurous aspect of television in the 1950s. TV first reached overseas in 1950, with a live broadcast from Calais, and in 1954 the Eurovision network was established. Two years later the first Eurovision Song Contest was broadcast, which the BBC relayed.

Although television in the 50s was mostly live, filmed programmes became more common. David Attenborough presented his first wildlife documentaries in the series Zoo Quest, and favourites for younger children like Andy Pandy, the Flowerpot Men and the Woodentops  were made on film, so they could be repeated for years to come.

Children’s television was becoming a more important part of the schedule, and the BBC’s new Lime Grove studios became the home of children’s programming, with a wide range of programmes both factual and fictional. Blue Peter was launched in 1958, arguably the ideal children’s magazine format – certainly the longest-lived. Radio was still a destination for children however, with Children’s Hour and the new pre-school series Listen with Mother.

With the emergence of rock ‘n’ roll, music that appealed to teenagers made its way onto the air in Saturday Club (originally Saturday Skiffle Club), Six-Five Special and Juke Box Jury. Other musical tastes were not neglected – the Third Programme featured the more challenging classics, while its frequency also hosted the more mainstream Music Programme in the daytime from 1957. Jazz, dance and light music were featured.

Current affairs took a step forward in 1953 with Panorama, originally a broadly-based magazine, which gradually focussed more on political and social matters. Daily topical magazine Tonight joined it in 1957, offering a lighter take on events. General Election coverage began in 1950, and 1954 saw the first live television news bulletin. Other innovations included the first prime ministerial broadcast by Sir Anthony Eden at the height of the Suez crisis and in 1957, the first television broadcast of the Queen’s Christmas Day message. 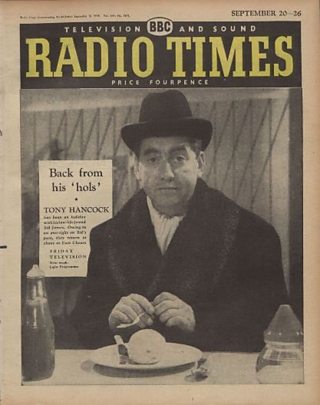 Drama continued to be a major part of BBC output. In 1950, BBC listeners first tuned in to the goings on in Ambridge, with the advent of The Archers. The first television soap opera, The Grove Family, appeared on BBC TV in 1954 and featured on the front cover of Radio Times the following year. The 50s was also a golden age for radio comedy, with the arrival of The Goon Show (originally "Crazy People"), The Navy Lark and Hancock’s Half-Hour.

Technology was making leaps and bounds, sometimes more behind the scenes than to the viewing and listening public. In radio, the first experiments with stereo were carried out, while in television the use of recording increased, at first by filming from a TV screen, and later on videotape. Colour television test transmissions began.

The 50s were still an era where sound broadcasting had a major impact, but it was a time of consolidation rather than expansion, and one where the traditional BBC of sound radio had to face up to the fact that it was television that would dominate in future. This unfolding story can be read about in detail now, in the pages of the Radio Times magazines that are available on the Genome website.