The View from the Top of the Form 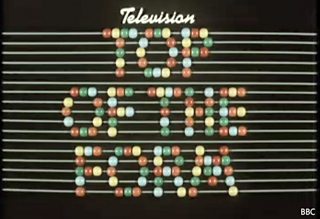 Television Top of the Form, which began in 1962, pitted teams of school children against one another in a challenging weekly quiz show. Ken Lindsay, a schoolboy at Elgin Academy in Scotland, remembers the excitement of appearing as a contestant in 1973.

"I was in the sixth year at school when we were approached to be on TV Top of the Form," says Ken. "It was great – we were all really competitive and very into the whole thing."

Host Geoffrey Wheeler had taken the helm of the Television Top of the Form from the beginning, but had been the sole presenter since 1970 (earlier versions had been co-presented with David Dimbleby, among others). Wheeler was the question-master when Ken and his team-mates took part.

The programme was recorded 'as live' in front of the whole school. So was it nerve-wracking for Ken to be up in front of his peers, and under pressure to find the right answer? "You did get a bit of stick if you didn’t have a good round," says Ken. "But generally speaking people were very good to us." The Elgin Academy team won all their rounds and went on to be crowned winners at the end of the series.

The programme was recorded in colour, but few people had colour sets at that time, so Ken and his team-mates watched the programme back from a teacher’s house.

When Ken and his team-mates emerged victorious, the reward for their success was a trip to Hong Kong for another exciting quiz show. In 1967, Television Top of the Form had branched out with an international version called Transworld Top of the Form (later Transworld Top Team), initially with UK teams playing Australia. Satellite communication still being relatively new and expensive, the programmes were originally made by playing the game 'live' in sound only, with proceedings videotaped separately in each country, then assembling the programmes from these elements later. 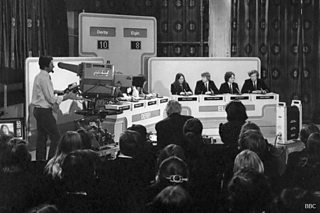 Recording the 1973 Television Top of the Form final between Derby and Elgin, with BBC outside broadcast cameras.

This version of the show continued until 1973, with teams from Canada, Hong Kong and the United States taking part, although by the time Ken took part the teams were sent overseas. The Elgin Academy team was flown out by the RAF on a VC10 transport plane, stopping off in Cyprus and the Maldives on the way.

"Back in 1973, kids didn’t go anywhere," says Ken. "It was really quite a thing to travel thousands of miles across the world."

That summer, the team disbanded and headed off to University. But there was one more surprise in store, when they were contacted again by the BBC to take part in a one-off special quiz show hosted by Frank Bough – Use Your 'Euro' Loaf. "We thought it was all over," says Ken, "so to be asked to come on again and go to Television Centre, that was a bit of a thrill."

The programme was filmed on Ken’s 18th birthday and ended with the surreal spectacle of Frank Bough cutting up a loaf of bread and handing a slice to the contestants. "Unfortunately we lost the competition, but the hospitality in the Green Room afterwards was excellent. It was a good laugh!" says Ken.

Nearly 50 years on, Ken and his team-mates stay in touch, although they have yet to organise an online quiz! As for Television Top of the Form, it was nearing the end of its run when Ken was involved, with the final series being shown in the summer of 1975. The original radio version, plain Top of the Form, soldiered on, finally coming to an end in 1986 after a run of 38 years.

In its day though, Top of the Form and Television Top of the Form were a great opportunity for children to show their knowledge and quickness of reaction in a not-too-serious quiz format. 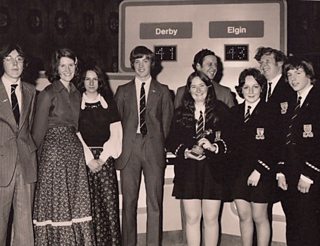 The Derby and Elgin teams pose for a photo at the recording of their Top of the Form appearance, with questionmaster Geoffrey Wheeler. Ken Lindsay is pictured on the right.

Life on Earth: How electronic music helped us 'see' nature

When is a Listing not a Listing? When it's a Gag...