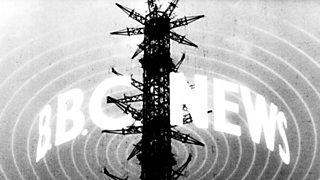 The BBC has been broadcasting news since its inception, and at times it seems as if BBC News is synonymous with the Corporation itself.

It has certainly become one of the irreplaceable pillars of the BBC’s structure, and yet it has always been a subject of controversy in its reach, structure, timing and very existence.

Early bulletins on radio were feared by the newspaper industry in case they removed the need for people to buy papers. The BBC’s news gathering initially relied on established press agencies, which had to be carefully credited on each bulletin, and its news time slots were restricted to not affect newspaper sales.

Two national crises showed what the BBC could do without these restrictions:  the General Strike of May 1926, when all newspapers except the government-run British Gazette and the TUC-published British Worker ceased production. The BBC proved a largely impartial and up-to-the-minute source of news (although the government put pressure on the BBC’s then Managing Director, John Reith, not to broadcast a right-of-reply to the government by Ramsay Macdonald, the leader of the opposition, or a call for negotiation by the Archbishop of Canterbury).

And 13 years later came the outbreak of war.  While newspapers were still published throughout the conflict - albeit in curtailed form due to paper rationing - the BBC could give a more immediate news service, which was especially vital once the war in western Europe started in earnest in mid-1940, and the country was faced with the possibility of invasion.

While the BBC resisted a direct take-over in both cases, during the war it was closely supervised by the Ministry of Information – at first the Minister was in fact Reith, who had resigned from the BBC in 1938 and was appointed by Neville Chamberlain.  However Reith and Winston Churchill had an antagonistic relationship, so when the latter became Prime Minister, Reith was replaced.  The BBC became an essential source of news and information for the whole country.  Freed from the reliance on agencies, the BBC’s reporting reputation was born with the work of correspondents such as Richard Dimbleby, Frank Gillard, Wynford Vaughan-Thomas and others, while bulletins were presented by Alvar Liddell, John Snagge, Stuart Hibberd, and the unflappable Bruce Belfrage, who continued reading a bulletin even when Broadcasting House was hit by a bomb in 1940.

The war also saw a massive increase in BBC services to the rest of the world, with its broadcasts to occupied Europe becoming a lifeline for information and morale to populations subjected by the Nazis.  Servicemen around the world were also kept informed of what was happening at home throughout the conflict. 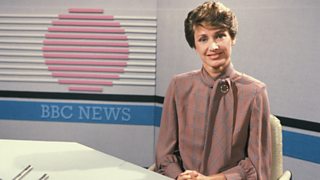 Television news took some time to become established in the form we know it today.  For a long time the BBC news division was suspicious that its hard-won reputation for impartiality would be compromised by seeing a newsreader.  Radio news was read in a very careful and studied manner.  Radio news bulletins were recorded for television and relayed at the end of broadcasts for some time from 1938 onwards.

Visually, before the war the BBC Television Service relied on cinema newsreels – alternating British Movietonews and Gaumont British News.  These were no longer available after the war (and of course there was no television during it), so in January 1948 the BBC started its own Newsreel, produced by the BBC Film Unit – which had made occasional short ‘news’ films before that on an ad hoc basis.  The Newsreels gradually increased in frequency from the original two a week until by the early 50s they were produced daily, apart from weekends.

Newsreels were not especially topical, and were not noted for their hard news.  When commercial television was mooted, there was a growing awareness of the need to provide a better service, and against the strong resistance of the BBC’s New Zealand-born head of News, Tahu Hole, it was decided to launch a proper news bulletin, which were live with filmed inserts, as opposed to the all-film Newsreel.  The first of these was broadcast on 5th July 1954.  To avoid the risk of the newsreader’s expression betraying his opinion, they were not at first visible on screen - viewers heard a disembodied voice over captions and photos.

Eventually, with the advent of ITN with their on-screen newscasters, the BBC relented, and Kenneth Kendal became the first newsreader to be actually seen.  Kendall, and his regular colleagues Richard Baker and Robert Dougall, kept reading bulletins until the start of the 1980s, with contributions from other less long-standing names such as Michael Aspel, Corbett Woodall and Robert (Bob) Langley.

All BBC newsreaders were male until the 1970s, apart from a brief experiment in 1960 where Nan Winton read a few bulletins.  Angela Rippon became the BBC’s first regular female newsreader in 1974 and was an instant hit, famously appearing on The Morecambe and Wise Show.  In 1981 Moira Stuart became the BBC’s first minority ethnic female newsreader, a year that also saw the old guard of newsreaders, who mostly came from acting/announcing backgrounds, replaced by journalists such as John Humphrys and John Simpson.  Technology moved on too, with the filmed reports of the 50s giving way to ENG (Electronic News Gathering) in the late 70s, routine use of satellite transmissions, through to the Skype and citizen journalists of the present day.

For a time in the 50s the Newsreel had continued as an adjunct to the News, but gradually it was amalgamated into the main bulletin, and less topical news content was put into Behind the Headlines, News Extra, and then the new magazine programme Tonight that began in 1957.

At around this time the concept of local news was also born on ITV, which with its regional companies was obliged to reflect the local areas it served, and the BBC followed. Its BBC local news was eventually titled Town and Around, a programme that lasted nearly 10 years.  The number of bulletins in the day increased as broadcasting hours increased, with the pattern of morning, early evening and later evening news programmes becoming established.  The early evening news was always packaged in with the regional news, but the later news was sandwiched between general programming, and until 1970 was not at a memorable junction point.

ITN had inaugurated its News at 10 in 1967, and while BBC2 had its 30-minute Newsroom, giving a broader range of stories, becoming the first colour news programme at the start of 1968, it was not  until the Nine O’Clock News began in September 1970 that more time was given on the majority BBC channel to the news.  The Nine was to last for 30 years, until it was replaced by the Ten O’Clock News in 2000.

BBC2 meanwhile, after dropping Newsroom at the end of 1972, eventually replaced it in a similar slot with NewsDay (the capital D didn’t last long) a reference to its host Robin Day, one of the early ITN newscasters who had become known for his caustic interviewing style both there and on the BBC’s Panorama.  From 1975-6 BBC2 named their late night news bulletin Newsnight to match.  This was renamed simply Late News, but someone liked the title as it was resurrected a few years later. 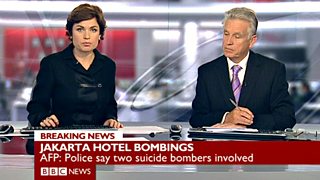 The original Tonight ended in 1965, and was replaced by the more news-y Twenty-Four Hours.  This was in turn replaced by Midweek in 1972, which only ran from Tuesdays to Thursdays, and then by a resurrected Tonight from 1975-79 – or at least the title, although it had a relaxed format and regular long interviews.  It was planned to rejig this programme and transfer it to BBC2, but an industrial dispute held up the move until early 1980, when Newsnight was born in its current format.  The gap on BBC1 was filled with “Question Time”.

Regional news programmes were given more prominence too, when the BBC launched Nationwide in 1969. The main Nationwide programme was trailed before each region cut to its own output, but lived up to its title by a mixture of films and studio contributions from around the country, so many of the hosts from outside London became well-known nationally.  It was replaced in 1983 by Sixty Minutes, which retained some of the regional element, but something was lost in translation and the series was dropped after a year.

One area where television had rarely ventured before the 1980s was the early mornings, apart from rare occasions, usually linked to elections or sport, such as the 1968 Olympics.  In 1983 ITV was about to launch its own breakfast news show, and the BBC decided to pre-empt them.  On 17th January 1983 the first edition of Breakfast Time, hosted by Frank Bough was shown, and with title and format alterations to Breakfast News and then simply Breakfast, it continues to this day.

Breakfast Time was pitched as  more like a ‘daytime’ show than a news programme, with magazine type features, keep-fit sessions and horoscopes, as well as celebrity guests, and famously sofas and sweater-clad presenters.  Breakfast News was designed to be a more serious proposition, with suits and desks, and early sightings of Jeremy Paxman.  Breakfast is a compromise between the two approaches.

Television’s broadcast hours finally became continuous in the late 90s, with the advent of the BBC’s rolling news channel.  Although news was already available on BBC World through the night, with events such as the death of Princess Diana in 1997 it was felt that the BBC had to provide a continuous news presence.  As well as launching in its own right on 9th November that year, News 24 was also broadcast on BBC1 after the end of normal programmes – which had the side effect of putting an end to Closedowns, and the playing of the national anthem.

Radio news had continued all this time of course, and the current pattern of programmes was established between 1957 when the Today programme began and PM in 1970 on the Home Service and then Radio 4.  While the Third Programme/Radio 3 originally shied away from carrying news, it still has some news coverage like the Light Programme/Radio 2. However, Radio 1 from its early days featured Newsbeat, covering current events tailored for its young audience.  After the success of Radio 4’s rolling news coverage during the 1990-1 Gulf War, Radio 5, which had begun in 1990, was rebranded as Radio 5 Live in 1994 and included generous amounts of News reporting.

Apart from the fairly anodyne Children’s Newsreel on 50s television, there was no real attempt to provide a child-friendly news service until 1972, when John Craven’s Newsround was born.  Now known simply as Newsround, in the days before rolling news it was often able to break stories before the early evening news, such as the Challenger disaster in 1986, and now has a long and admirable track record in covering and explaining the world to children, and campaigning on many serious issues.