Life on Earth: How electronic music helped us 'see' nature 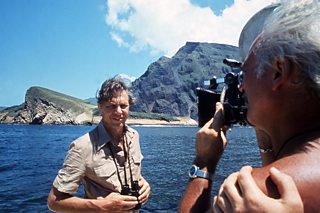 Sir David Attenborough during filming for the 1979 Life on Earth series.

David Attenborough's landmark 1979 series Life on Earth brought the story of the evolution of life on the planet to TV audiences in glorious, vivid detail. The BBC Music Library looks back at how a new style of music, by composer Edward Williams, was crucial to telling the story.

In reflecting on his personal history recording music around the world, Sir David Attenborough noted the singular power and immediacy of music to transport and transform: "music takes me back to those places 50 or 60 years ago… visual images don’t… but hearing the music takes me right back."

Before we see the stunning visuals of Attenborough's Life on Earth (1979), we hear composer Edward Williams' music. It is awesome - in the true sense of the word - and signals that something momentous is happening. The opening titles are as if Strauss were refracted through the lens of British post-war modernism. It is an invitation to imagine the world anew, from the very dawn of civilisation. It seems unthinkable that there’s not at least a small nod to Kubrick in there.

Born in 1921, Edward Williams studied music under, amongst others, Ralph Vaughan Williams before becoming a composer for film and television. With BBC credits as far back as 1949, it was his experimental style and early adoption of electronic music that marked him out for a new and ambitious project - BBC Two's landmark natural history documentary series - Life on Earth.

Edward Williams combined electronic music and orchestral instruments. To create the sound-world for the series he fed recordings of orchestral instruments through an early analogue synthesiser (the now iconic VCS 3), sculpting and transforming the sound of the acoustic instruments into electronic spectres as he did. The results remain magisterial, unique, and vivid, like the images for which they were created. They are also strange, almost "otherworldly."

When the series Life on Earth first appeared it was immediately recognised for what it was - a seismic shift, different from what had come before and shaping what would come next, in the output of natural history broadcasting.

"It began with birdsong and now it sends David Attenborough around the world" was Roy Plomley's summation of the first 25 years of the BBC Natural History Unit. While you’d be forgiven for thinking that the stunning visuals of the natural history documentary are indispensable (along with, of course, David Attenborough), the origins of the BBC Natural History Unit lie, surprisingly, in the distinctly 'non-visual' medium of radio.

The long-running radio series The Naturalist was a huge popular success, running for almost two decades from the mid 1940s and was key to the foundation of the BBC Natural History Unit in Bristol. The series brought natural history to life using what were called "sound pictures" in the 40s and 50s. Many of these field recordings were created by legendary sound recordist Ludwig Koch, a German refugee who - despite being interned for a time as an "enemy alien" - had become a famous BBC personality by the end of the war. His "sound picture" of the song of the curlew became the signature tune for The Naturalist. This technological advance allowed the BBC to broadcast Nature directly into people’s homes for the first time, using nothing but sound, and people loved it.

Like The Naturalist before it, one problem for Life on Earth was how to deal with the "non-visual." For Life on Earth, this meant particularly the rather "small, insignificant and non-visual" start to the story of human evolution. The solution for both was the same - sound and technology. 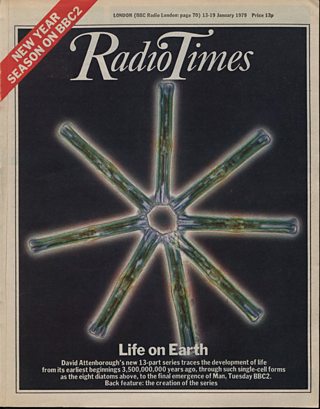 Meet the Ancestors: Radio Times celebrated the start of Life on Earth with this cover showing eight single-cell organisms

That decade also brought a shift towards a more cinematically informed and ambitious approach to the natural history documentary at the BBC, a place (and genre) where the enthusiastic amateur had long driven production. Life on Earth was both the arrival point of that development, and the origin of a recognisably modern form. Like its soundtrack, the series is at once familiar and strange.

Edward Williams was enlisted for Life on Earth because of his experience and skill in writing for "combinations of electronic and conventional musical instruments." While, during planning, it was thought some "special sounds" for the series might have to be made in the BBC’s own experimental sonic laboratory - the Radiophonic Workshop - their eventual involvement appears limited. 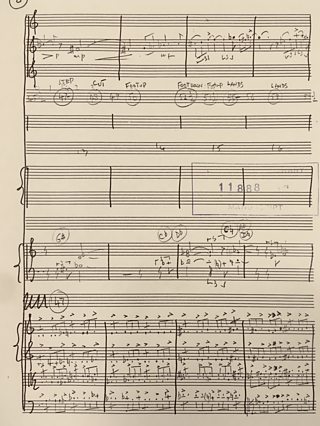 Edward Williams' hand-written score for Life on Earth part 4, with notation matching music precisely to the pictures (at top)

Life on Earth had to blur the lines between our familiar lived experienced of the world, and the strange scientific reality of natural history. Edwards Williams, by combining his "special sounds" with "conventional musical instruments", took up this challenge, and transformed the soundtrack of science fiction into the music of scientific fact.

For a series characterised by effortless cuts from one part of the globe to the other, it’s also perhaps ironic to think that part of Edward Williams’ appeal as composer would have been his specific geographic location. Based in Bristol himself, Williams worked closely with the creative team. The score bears witness to this collaboration. On one characteristic page, from the 4th episode, Williams has scrawled non-musical indicators in fractions of seconds, wedding sound to image with scientific precision: "STEP CUT FOOTUP FOOTDOWN FOOTUP LANDS LANDS." The music masterfully scores both the edit and the visual dance of the insect.

It might seem a paradox that in this series, technology should bring us closer to Nature’s marvels, but the stunning visuals of the nature documentary do not conjure marvels alone. The "invisible" work of the soundtrack might be just as important, and even more enduring. In the end music takes us "back to those places 50 or 60 years ago…"

Coming to You Live - The Origins of Outside Broadcast Television

The View from the Top of the Form