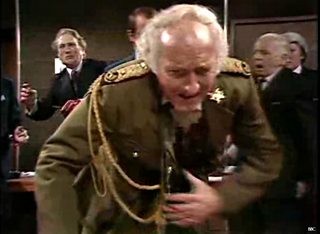 We are now busily marking the 400th anniversary of the death of William Shakespeare, and with Genome’s retrospective glance we decided to tease out programmes which take an unusual look at the Bard’s work.

Programmes that refer to Shakespeare and his works are of course even more numerous than performances of his works. We're looking at unusual documentaries on the great man, and other quirky offerings, including dramas inspired by his plays, as well as programmes featuring Shakespeare (and his relations).

One of the most memorable productions I personally remember was 1973 schools series Heil Caesar,  an adaptation of the story of Julius Caesar by John Bowen.  Not only staged in modern dress, it was also rendered into modern English.  With an excellent cast and high production values for a schools drama, what shocked was the level of violence for something shown during daytime. In place of the traditional stabbing of Caesar by daggers, his assassination involved flick knives, and the bloody results were very graphic.

The original three-part production was so successful that it was shown again in an adult viewing slot the next year, edited into a 90-minute feature length programme, and in 1975 an introductory programme for schools examined the series, with comments from the cast. 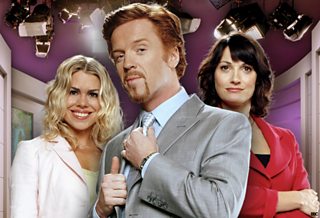 Billie Piper, Damian Lewis and Sarah Parish in the ShakespeaRe-Told version of Much Ado, set in a newsroom.

Another re-imagining of Shakespeare came thirty years later in the ShakespeaRe-told strand, with four new plays based on Much Ado About Nothing, Macbeth, The Taming of the Shrew and A Midsummer Night’s Dream.  These were peak-time productions with all-star casts, featuring the likes of Damian Lewis, Julie Walters, James McAvoy, Billie Piper and James Nesbitt.

Neither of these was of course the first time Shakespeare had inspired other writers, and there have been many other re-imaginings of his works from Forbidden Planet to the films of Kurosawa to Kiss Me Kate.

Another innovative interpretation of some of Shakespeare’s plays came with Shakespeare: The Animated Tales, where abbreviated versions of some of the best-known plays were turned into animation, using various techniques.

Initiated by BBC Wales, and including Welsh translated versions as well as the English originals, the series also employed the skills of Russian animation studios at a time when the country was in a state of flux with the collapse of the Soviet Union. 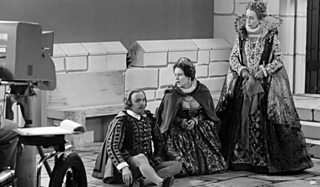 The 1939 version of Bernard Shaw's The Dark Lady of the Sonnets, in the days before the BBC could afford chairs.

Inspiration for wholly original works has also come from Shakespeare’s life and legend, and the many mysteries and controversies surrounding him, as far back as George Bernard Shaw’s The Dark Lady of the Sonnets, shown on television several times from the 1930s onwards.

There is also the Clemence Dane play Will Shakespeare, and in more recent times radio dramas like Mrs Shakespeare by Robert Nye, and A Song for Edmond Shakespeare, imagining events in the lives of his wife Anne Hathaway, and his brother Edmund respectively.  Anne Hathaway’s famous bequest from her husband also inspired the play The Second Best Bed which was produced on the BBC as long ago as 1931, and re-performed several times.

1982 saw Radio 4 broadcast John Wilders and John Powell’s ‘imagined scenes from a documentary life’ in I William Shakespeare, which starred Martin Jarvis.  Judith Shakespeare in 1996 was Nan Woodhouse’s take on the travails of being the relation of a celebrity, from the viewpoint of Shakespeare’s youngest daughter.

In the field of conventional documentaries, of course Shakespeare has been better served that many others, as the most analysed and referenced figure in British culture.  To take some fairly random examples, Shakespeare’s Island was a 1971 film looking at how the RSC prepared for a production of The Tempest at Stratford, which included Ben Kingsley and Ian Richardson among its cast.

Shakespeare on the Estate and Shakespeare Behind Bars were two examples where Shakespeare’s plays have been mounted in challenging settings as a way of involving communities in the first instance, and prisoners in the second. 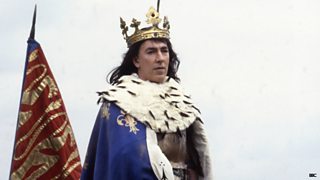 The place of Shakespeare in British culture has inevitably made him the subject of humour on numerous occasions.  How to Appreciate Shakespeare was a 1947 Third Programme comedy ‘lecture’ by Stephen Potter of Oneupmanship fame.  There have been many comedy sketches using the best-known Shakespearean scenes, such as the balcony scene in Romeo and Juliet, memorably re-enacted for Comic Relief with Frank Bruno.

Blackadder never featured Shakespeare himself, even in Blackadder II, which covered the period he lived in – though he was briefly mentioned and there were various themes that would have been familiar to Will himself. The first series, The Black Adder, however, was a spoof of many aspects of the History Plays, and included of course lines from Richard III, as portrayed by Peter Cook – the series acknowledged the debt by crediting Shakespeare for “additional dialogue”.

While not a comedy (as such), Doctor Who has also featured references and appearances by Shakespeare.  As well as Tom Baker’s Doctor claiming to recognise his own writing on an original Shakespeare manuscript (Will having sprained his wrist writing sonnets), Shakespeare makes two appearances in person.

In 1965 episode The Executioners, the Doctor uses a device called the Time-Space Visualiser to look at various scenes from history, including that of Shakespeare being commanded to write a play about Falstaff in love by Queen Elizabeth I (and inadvertently being inspired to write Hamlet as well).  That was a cameo, but he was a lead character in 2007 David Tennant episode The Shakespeare Code, where the plot revolves around the writing of the lost play Love’s Labours Won.

What are your favourite BBC Shakespeare moments?  Let us know below (extra points for iambic pentameters!)