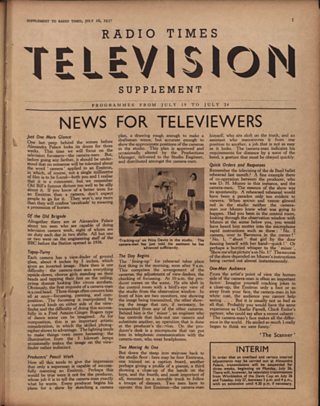 The cover of the last Radio Times Television Supplement, from July 1937. The final programme before TV's three week 'holiday' was Review of Revues, which included Valerie Hobson, later the wife of John Profumo MP...

Starting eighty years ago today, in the summer of 1937, television took a holiday for three weeks. The service was still in its infancy, and engineers at Alexandra Palace needed to carry out maintenance on equipment which they were still working out how to use.

Radio Times had given fair warning to the handful of television viewers then tuning in. The issue published on 10 July announced: "INTERIM:  In order that an overhaul and certain internal adjustments may be carried out at Alexandra Palace, transmissions will be suspended for three weeks, beginning on Monday, July 26.  There will, however, be television transmissions from Wimbledon of the Davis Cup on July 26 and Tuesday, July 27, between 3pm and 4pm, with an extension until 4.30pm if necessary.” The tennis was transmitted as promised, but in fact transmissions continued for the whole period, albeit only of test programmes.

Television had been going for just under a year by summer 1937. Though the official launch was in November 1936, there was a special transmission to the annual RadiOlympia exhibition in August that year, followed by a few weeks of test programmes. All of these alternated the Baird and Marconi-EMI television systems, which the government’s Television Advisory Committee had decided should be trialled for up to six months before the final system was chosen.

By the end of January 1937 however, it was clear to the BBC and the Advisory Committee that although it had some good features, the Baird system, involving separate Spotlight studio (for close-ups) and Intermediate Film (for long shots), was too impractical to take any further. Marconi-EMI, with its higher resolution picture of 405 lines, and more flexible working method, became the sole television format.

That said, there were still issues to be resolved, and so it was decided to take the single studio (Studio A) then in use out of service for a few weeks. The break also saw the end of the Radio Times Television Supplement, which was glossy, lavishly illustrated and expensive to produce; indeed there were no television listings at all in the magazine during the three weeks.

Jasmine Bligh, one of the original trio of television announcers, seen in an off-screen still from August 1937. She was distantly related to Captain Bligh of 'Mutiny on the Bounty' fame

In terms of content and viewing hours, television at this time was still very limited in scope: there was only an hour’s transmission in the afternoon and the same in the evening. During the ‘holiday’ period, films started to be shown in the morning, initially cinema newsreels, and something called Ace Magazine. These gave electrical retailers something to show when demonstrating sets in the morning, even if only during a one-hour window.

This period also saw the debut of the BBC Demonstration Film, which would endure until the mid-1950s in a constantly-changing form. As the recording of electronic pictures, even onto film, had not yet been satisfactorily achieved, demonstration films were made as conventional films, recreating selected items with the original performers. Apart from still photographs and a couple of short excerpts from actual transmissions which have survived, demonstration films are about the only idea we have of what the earliest television looked like.

There was no television transmitted on Saturday 31 July, or Bank Holiday Monday, 2 August. There was also no transmission on Sunday 1 August - or any other Sunday (until April 1938). Sundays in the 1920s and 1930s were regarded as being very special by the BBC, under the influence of the strictly religious Director General, Sir John Reith. As Reith was no fan of television generally, it is perhaps not surprising that Sunday was television’s regular day off, and this only changed a couple of months before Reith left the BBC. 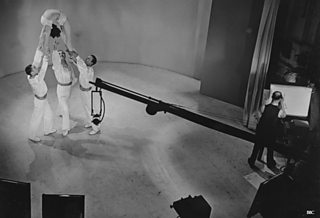 Adagio dancers the Bega Four performing on an edition of Cabaret Cartoons in 1937, while being drawn by cartoonist Harry Rutherford (right), who had studied alongside L.S. Lowry

There were occasional technical breakdowns, though it is not recorded whether these were spontaneous or the result of the maintenance work. There were no evening transmissions during this period, and the afternoon programmes were transmitted earlier than normal. On the last day of the ‘holiday’ period, Saturday 14 August, the service closed down at midday.

Television returned to normal at 3pm the following Monday, August 16. Jasmine Bligh was the announcer, and the first show, after a newsreel, was a ‘mixed programme’ consisting of Indian dances by Mayura Vincent, songs by John Thompson, and an adapted Tolstoy story “Capital Punishment”, starring Charles Lefeaux. After an ‘interest’ film, Bugle from Blue Grass, there was more drama, starring Jean Forbes-Robertson in Scenes from Romeo and Juliet, with Michael Redgrave as Romeo, although he was not credited in Radio Times. (Unfortunately for technical reasons these listings are not presently on the Genome database.)

Evening programmes included veteran actor Bransby Williams in his celebrated monologues, a talk on commercial art, and another newsreel. The transmission concluded with Cabaret Cartoons, with Harry Rutherford doing lightning sketches of the performers, including singer Ingrid Linck, ‘upside-down dancers’ the Topsy-Turvey Two, and adagio dancers the Bega Four. (Two scheduled acts, Trudi Binar and The Grip Four, did not appear.) The programme was directed by the television programme organiser, Cecil Madden.

And so television carried on. It never again took a ‘holiday’ – unless you count the Second World War, the 1947 Fuel Crisis, and the occasional strike…

Marconi - the Sound of Silence