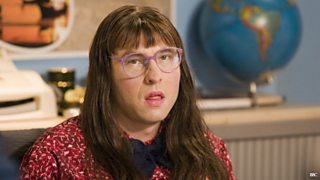 Today BBC Three switches from a linear broadcast channel to an online-only presence.  We mark the occasion by considering the when, what and why of BBC Three.

The BBC moved into digital broadcasting in the late 1990s, with the launch of the BBC News channel (aka BBC News 24) in November 1997, followed by BBC Parliament and BBC Choice in 1998, and BBC Knowledge in 1999.  BBC Choice launched as an online service initially, as it was not until a week after its debut on 23 September 1998 that digital television became available in the UK with Sky Digital on 1 October, and ONdigital in November.  Choice was the first UK channel to transmit solely via digital broadcasting.

BBC Choice was seen initially as an extension of the existing terrestrial channels, offering repeats and extended content related to programmes on BBC One and Two.  Its programmes included The Take and Backstage, the former a combination of themed archive clips and programmes, the latter a look behind the scenes of BBC shows.  Unlike BBC Three, Choice also broadcast children’s programmes, only at weekends at first, but later on weekdays too.

In summer 2000, the BBC changed the format of both Choice and BBC Knowledge, with the former concentrating far more on the youth audience.  Soon after proposals were put forward to rebrand BBC Choice as BBC Three and BBC Knowledge as BBC Four, with children’s programming moved to two dedicated channels, CBeebies and CBBC.

BBC Four got the go-ahead, but the government wanted more consultation about BBC Three because of a perceived clash with what was already being offered by channels such as ITV2 and E4, and it was not until early 2003 that the BBC was able to proceed with the new service.

But one lasting legacy of the evening would be a new sketch show, a television version of a successful Radio 4 programme, Little Britain. It starred Matt Lucas and David Walliams, with voice-over support from Tom Baker.  Like the earlier The Fast Show, Little Britain proved more than just a cult hit, with memorable characters and catchphrases that caught the popular imagination, making Lucas and Walliams into national celebrities. 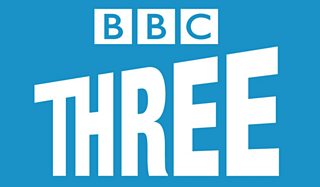 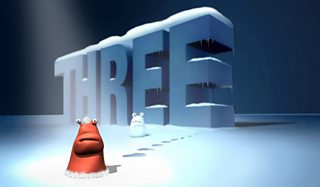 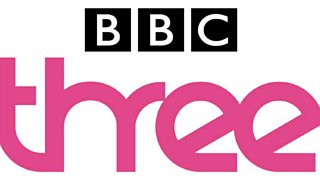 Some BBC Three logos. Take you back don't they... (I miss the little orange guys)

BBC Choice had repeated EastEnders since the autumn of 1999, and this continued on BBC Three, with EastEnders Revealed one of the few original series to translate to the new channel from Choice.  From the start, BBC Three had more success in finding new comedy shows than dramas, though it did eventually launch Torchwood, as well as hosting repeats of the new series of Doctor Who from 2005 (and spin-off Doctor Who Confidential).

There was also the popular fantasy drama Being Human, about a ghost, a vampire and a werewolf sharing a flat, which starred Russell Tovey and Aidan Turner, though there were several cast changes over its lifetime (including changes from the pilot).

Aside from Little Britain, undoubtedly the two most prominent BBC Three comedies have been the prolific Two Pints of Lager and a Packet of Crisps (although that was actually premiered on BBC2, to promote it, and was another series carried over from BBC Choice, where it debuted in 2001), and the sublime Gavin and Stacey.  The latter, written by and co-starring James Corden and Ruth Jones, concerned the long-distance relationship of Gavin (Matthew Horne) from Essex and Stacey (Joanna Page) from Barry, South Wales, and the problems that arise from their marriage and attempts to start a family, complicated by their respective best friends (Corden and Jones) and their families, friends and neighbours.

It’s always hard to analyse what makes a comedy successful, if it was possible to pin it down there wouldn’t be so many that fail to make the grade and are forgotten in the mists of time.  Gavin and Stacey had some almost soap opera elements, mixed with surreal character traits in the supporting cast, but at its heart there was a truthfulness about relationships that struck a chord with many viewers.

Like many a hit on a minority channel it did make the journey to the mainstream to capitalise on its success, but it succeeded in drawing attention to BBC Three as a seed bed for innovative programming. 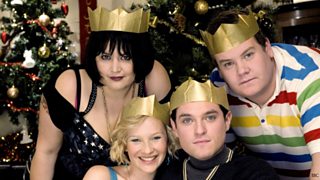 The Gavin and Stacey cast celebrate the monarchy becoming a job-share.

BBC Three also has a strong history of documentary making with a youth-oriented slant, and the kind of subjects it tackles have also been covered by its occasional one-shot dramas.  Since 2009 there have been a series of documentaries presented by Stacey Dooley, who first appeared as one of the contributors to Blood, Sweat and T-shirts the year before.  This led to her being asked to present investigations into such subjects as child labour, the sex trade, drugs, and the effects of tourism on the Third World.

News has also been a feature of the channel. Although its half hour news slot The News Show, later The 7 O’Clock News on BBC3, was dropped in 2005, news has continued to be presented in the form of 60 Seconds, a brief bulletin (hence the title), which later had dedicated summaries covering world events, science and entertainment.

One of the most striking features of the BBC Three had been its transmission hours – starting in the early evening but going on through the night.  Even though many channels are 24-hours now, the overnight programming tends to be uninspired due to the low viewing figures.  Although BBC Three (and Four is the same) does not do much new programming after midnight it repeats some of the same programmes as earlier in the evening.

This falls in line with the general policy of smaller channels:  the big beasts of BBC One and Two are always going to get more viewers, so it would be wasteful to only show a programme once, denying many people the chance to see it.  Putting a programme on more than once in a day, or repeating it over a number of days, not only spreads out costs, but gives more viewing opportunities.

Interestingly, this approach mirrors the earliest days of television. When the BBC’s high definition service began officially in November 1936, programmes were often given more than one outing, because even with the very small audiences then available it was recognised that someone who could view in the afternoon might not do so in the evening, or vice versa. Many shows were done twice in one day, and revived days, weeks or even years later.  We’re all used to the concept of repeats, but in the 60s and 70s some came to regard them at times as an annoyance. However for every person who has seen a programme before, there are always more people who have not.

BBC Three has suffered an image problem during its existence, with Jeremy Paxman famously deriding some of the titles of its shows on Newsnight.  Nonetheless, the news that it was to become an online-only channel was condemned by many leading lights in the comedy world who saw the value of the exposure the channel gave to new and innovative comedy.  Whether such shows will continue to be made and gain prominence in the new format of the channel, will only become apparent over time.

The BBC had been concerned for a long time that the younger part of the population has been falling out of love with traditional linear media.  The reaction to the BBC Three move has perhaps shown that the feeling is not universal, despite the fact that it seems the most logical channel to move if its target audience is really more interested in the internet than in television.

Even the younger viewers who are the core of CBBC's audience are now also said to be more inclined to view online than on a television set, so it seems likely the CBeebies audience may follow suit over time.

Will all BBC channels one day only be available online?  What are your memories and opinions of BBC Three?  Let us know, as ever, what you think, in the space below.

Sunday Post: Not Only… But Also - The Missing Minutes