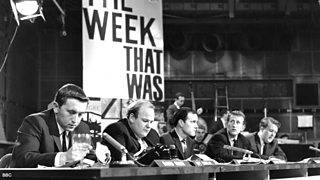 That Was the Week That Was, whose first episode was transmitted live on 24th November 1962 was one of the most influential comedy series transmitted by the BBC. Oddly enough, however, it was not made by the Comedy Department, but by the Talks Department, at that time headed by the formidable Grace Wyndham Goldie, although she had little to do with it personally.

The show was hailed as one of the main pillars of the 'satire boom' of the early 1960s, whose other expressions included the stage revue Beyond the Fringe (which starred and launched the careers of Alan Bennett, Peter Cook, Jonathan Miller and Dudley Moore; it is often stated to have been part of the Edinburgh Festival Fringe, but was created for the official Festival, hence 'Beyond…'), Peter Cook’s night club ‘The Establishment’, and the magazine Private Eye, now the sole survivor of the phenomenon.

BBC Director General Hugh Greene was keen on reviving the spirit of 1930s German cabaret clubs which he had witnessed himself (memorably, and satirically, described by Peter Cook as having “done so much to prevent the rise of Nazism”), but with the “Beyond the Fringe” team having taken their show to America, an alternative cast was sought. Ned Sherrin, a graduate of early evening current affairs show Tonight was appointed producer of That Was the Week That Was, while John Bird, star of ‘Establishment’ shows, was considered for the anchor man role, but this did not work out. With Peter Cook and Jonathan Miller having at various times been associated with the famous Cambridge Footlights club, Sherrin eventually cast a recent past president as his host – David Frost. Pilot recordings were made to test the new show’s format, and at first Frost was to share the role with journalist Brian Redhead, Frost having had only minimal previous experience on television, but in the event this was not felt necessary.

Other cast members were found, a mixture of seasoned showbusiness professionals who could add gloss, such as singers Millicent Martin and David Kernan who had worked with Sherrin on Tonight, and up-and-coming actors such as Roy Kinnear, Kenneth Cope and Lance Percival. One of the founders of Private Eye, cartoonist William Rushton, was also recruited, although not in that role, while another cartoonist, Timothy Birdsall, was to provide a weekly slot creating a cartoon live on air. Finally, columnist and critic Bernard Levin contributed a weekly item where he debated an issue with a group of interested parties, such as farmers, restaurateurs, or scientists. 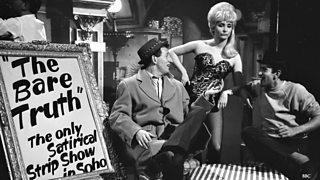 The show's skits and sketches tackled the issues of the day

The show was more or less an instant hit, catching the mood of the time. It was also lucky. Until the early 60s, deference was the rule, and it was a brave person who questioned the institutions of the country – it was just not done to doubt the place of the law, religion, monarchy or politicians, let alone make fun of them. In the wake of the Suez crisis of 1956, which saw Harold Macmillan succeed Anthony Eden as Prime Minister and preside over a rise in living standards (“You’ve never had it so good” was how it was popularly expressed), Beyond the Fringe had made a start on the process, though its practitioners later denied their intention was anything other than to make people laugh. Perhaps all they did, in a way, was to say on stage the kind of things people had been saying in private for years. As a stage show it had, at that time, to be submitted to the Lord Chamberlain’s office for censorship, but there was little comment on its content other than to tone down a stage direction (!) in a sketch about four outrageously camp actors.

Television curiously was another matter – not subject to direct censorship, but with a far greater audience, even at the late Saturday night timeslot allocated to TW3 (as it soon became known for the sake of brevity) it was more exposed to public criticism. As sacred cows began to be attacked, politicians and others mentioned by name (one sketch had the temerity to mention certain MPs who had not spoken in the House of Commons for a very long time; when one got up in the House to complain about this he was met with laughter), the show began to become unmissable. One advantage of its late slot was that it became almost open-ended, as there was nothing but the closedown routine to be delayed if it over-ran. But inevitably the opposition began to mount against it (although the Opposition, i.e. the Labour Party, was quite pleased, as the show of course attacked those in power, i.e. the Conservative government). Harder targets were tackled, including the Home Secretary Henry Brooke, who proved reluctant to commute death sentences in any circumstances, or allow even deserving political refugees to stay in the country.

The first series ended on the 27th of April 1963, having among other things revived the career of Frankie Howerd, who appeared on one of the last editions. Having had great success in the late 40s and early 50s, work had started to dry up, but after an ‘Establishment’ gig had gone down well he was invited to come on TW3 and shone; this led to a stage role in A Funny Thing Happened on the Way to the Forum, which itself led to Up Pompeii!, and to his own BBC tv series written by Galton and Simpson. Bernard Levin’s combative encounters had been immortalised also when the husband of an actress he had criticised in a press review, got into the studio in one edition and swung a punch at him. The cast had all become stars however, especially perhaps Millicent Martin whose rendition of the theme song was a highlight, its lyrics rewritten to comment brilliantly on the week’s news (the tune was by the prolific Ron Grainer). 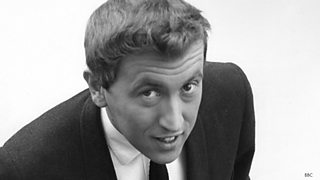 The writers too must not be forgotten, as well as Frost and other cast members they included the late David Nobbs, Dennis Potter, Keith Waterhouse and Willis Hall, John Cleese and Bill Oddie (the latter also made a couple of early on-screen appearances) and Private Eye’s Richard Ingrams, among many others.

The luck of events providing good topics for satire was not so evident in 1963, as that year’s great political scandal, the Profumo Affair, mainly took place during the show’s summer break (meanwhile Sherrin’s team were making a humorous programme about The Englishman Abroad. When TW3 returned on the 28th of September, it was able to cover the on-going fallout. However change was in the air, and not in a way that was going to guarantee the programme’s future. Nervousness at the satirical content of the show was heightened with such political uncertainty as the resignation of Harold Macmillan in the wake of Profumo. In a crude attempt to rein the show in it was decide to stop it being the last programme on Saturday night, by scheduling repeats of The Third Man series after it. TW3 responded by having Frost read out the plot of the night’s episode, and the repeats were dropped soon after. Unable to publicly criticise the show for its political content, people resorted to saying that its humour was vulgar and crude – and to be fair some of it was. With the last election having been in 1959, 1964 would inevitably be an election year, and this was finally to provide the excuse for dropping the show. Liberally interpreting the rules about political reporting in the run-up to an election, the BBC announced that TW3 would end on 28th December 1963.

One of the last editions was a truncated episode on 23rd November, a tribute to President Kennedy who had been assassinated the day before. The show was running out of steam, and morale was lowered by the death from leukeamia of one of its original cast, Timothy Birdsall, during the summer break. The 21st December edition was a rather lacklustre satirical pantomime, and 1963, like 1962, finished with a ‘best of’ show, That Was the Year That Was – the final episode.

The cast went on to other things, Roy Kinnear and Lance Percival had long careers in comedy, while Kenneth Cope remained an actor, notably in ITV’s Randall and Hopkirk [Deceased] and Coronation Street. Millicent Martin and David Kernan continued to work with Ned Sherrin on musical projects, while Sherrin came back with successors to TW3 after the election (itself marked by a one-off A Last Word on the Election, produced and directed by Sherrin, and starring Frankie Howerd), namely Not So Much a Programme More a Way of Life, and BBC3, before moving into film production. David Frost of course, who someone once said “rose without trace”, continued his inexorable rise, fronting Not So Much…, then The Frost Report (with John Cleese and two actors called Ronnie Barker and Ronnie Corbett), before moving to ITV and America, and interviewing disgraced ex-Presidents, the culmination of his earlier invention of ‘trial by television’.

It's easy to exaggerate the importance of television programmes, and it’s possible that without TW3 the course of television history might not have been too different. What it did might have been done by other shows in other ways. But it did what it did, and started many careers as well as reviving others, and led, arguably, to Monty Python’s Flying Circus, The Two Ronnies, Not the Nine O’Clock News and Have I Got News for You. It was one of the things that kick-started the 60s as we know them…

Every Sunday, Andrew Martin will be guiding you through the history of broadcasting by digging out archive gems and information from the BBC Genome listings.

Over To You: the quest for available BBC programmes