Stars of Genome: the cameraman on our front page 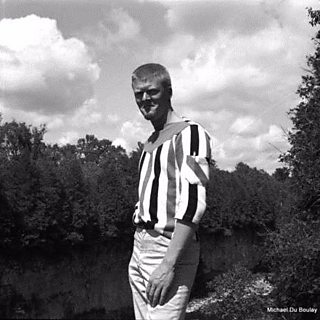 Michael Du Boulay sporting the striped jersey he was wearing when the picture was taken. He brought it all the way from Canada...

We have a lot to celebrate – to this date, we’ve accepted more than 170,000 edits from volunteers and we’ve linked more than 10,000 listings to programmes that are available to hear or watch online.

But on these two years you've also shared your stories about memories juggled by Genome listings. One of the first emails we received when first went live came from Kitchener, Canada. "I would like to point out that your opening page includes a picture of ME. I’m flattered. Nice to be able to show my family that I did actually work for the BBC", said Michael Du Boulay. 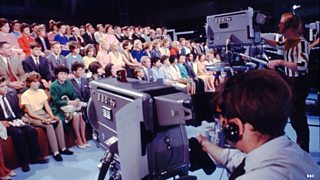 The photo that stirred Michael Du Boulay's memory. Can you spot him?

How did you feel when you saw yourself?

I was impressed that you should choose me to represent a BBC cameraman. I laughed because certainly my “jersey,” was not typical working dress of the day. Jacket and tie would be more truthful. I suspect whoever chose my picture wanted to change the image of the BBC. It was early on in my career there so much of my wardrobe originated in Canada! I think I was shooting Juke Box Jury.

How did you start working for the BBC?

My grandmother, who lived in England, sent me a BBC handbook of 1957 that outlined all things BBC. This was the spark that ignited my interest in working for such a prestigious corporation. I had toured England in 1959 then returned to Canada where I worked as an operator in Kitchener’s TV station. All along I was attracted to working in a larger more experienced service. I was in possession of an ITV glossy booklet showing off their studios in Elstree. This was the kind of facilities I hankered for.

My buddy and I sailed for Southampton in October 1962 with an introduction to Roy Thomson, who later became Lord Thomson of Fleet. He owned Scottish Television in Glasgow. We did not meet Roy but a director who gave us rail tickets to Glasgow to check out Thompson Television International. This was his company selling used TV equipment to offshore locations. We were involved in electronic conversions of cameras from 405 to 625 line standard. Scottish Television had purchased a mansion (Kirkhill House) outside of Newton Mearns to set up as a training college for staff from the recipient countries. All the while I was writing letters to BBC London in hopes of gaining an interview to no avail. I left Scotland early in December moving to London and finally got an interview in February 1963. BBC 2 needed more crews to produce programmes through existing studios. 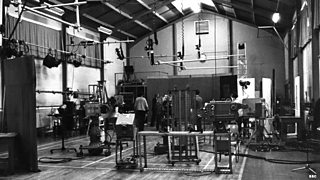 What was your job at the BBC?

I was hired come March 1963. I started in crew 2 where Frank Wilkins was the senior cameraman with the famous Jim Atkinson as number two. Another crew member, Peter Hider, was assigned to me with the task of making me familiar with all the technical facilities in a larger studio. I began on cameras but moved to inlay/overlay then vision control. I thoroughly enjoyed the high standards of all skills serving BBC’s productions.

My time at Evesham in Tech Ops course No. 16 was a great experience along with learning where in the country to place some of the accents I heard in class.

On April 20th, 1964, BBC 2's inaugural transmission was marred by a massive power failure. I was working on Panorama at Lime Grove and waited around hoping we would get power back and go to air. That didn't happen so off I went home and Panorama transmitted from Alexander Palace.

On the Friday that President Kennedy was assassinated, I was off at home. Heard the news on radio and the "bottom" of my stomach fell out! I had a date that evening to see The Balcony. Within the story there was a discussion about the merits of driving through the town in an open car. That was very hard to take. The next day I worked the Billy Cotton show at the theatre and all eyes were on network transmissions when possible to see the aftermath of that horrible event. 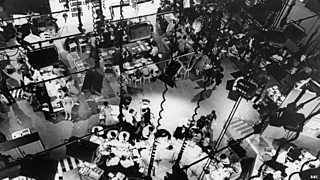 On October 15th, 1964 Britain had their general election. The BBC used two studios (TC1 and TC2) to facilitate 14 cameras covering election night and following returns. Richard Dimbleby did a fantastic job. This was the only time I was required to sleep over at the Centre. They put us up in East Tower so we could meet the 07:30 hr crew call to cover the results. I was camera control of the five studio cameras in studio 2 while other operators controlled the nine other cameras looking at caption boards updated with county results in studio 1. I worked on and off all day finishing at 21:20 hrs.

During a recording of the Beatles on Top Of The Pops, Paul McCartney came up to control room to sit in gallery and watch proceedings. I was doing vision control that day. I was tempted to go and talk but BBC culture frowned on operators mixing with show-business types.

If the bands had a number on the charts for more than a couple of weeks the practice was to bring them in to record their number for next airing of Top Of The Pops. I worked on two Rolling Stones numbers. Hey You Get Off Of My Cloud and Nineteenth Nervous Breakdown. Cilla Black also was recorded. This was early beginnings of "music videos!" 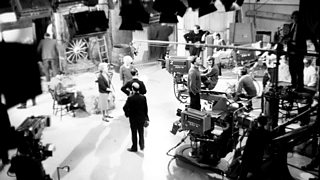 Michael Du Boulay joined the BBC Camera Club and took this photograph of a BBC studio.

The BBC had been around for many years so staff benefits were established such as providing lunch vouchers and a soft-shoe allowance for crews working on studio floors. The latter ensured quiet crew movements while mics were open.

Having a "pub" in the Television Centre was a novel feature for me coming from Canada where no such facility existed in the work place. Much drama was produced in those years and I was very impressed with the high standard of performance from all the actors. We rehearsed everything and each rehearsal was the same. While working on Dr. Finlay’s Casebook you couldn’t help but notice the attention to details in the set dressing with all items accurate to the period... a 1928 Scottish practice at "Arden Hoose!"

I think that everybody was very proud of working for the BBC in those days. I was very impressed with the work day in the studio. When a "tea break" was called everybody vanished. Actors and crew were always on time. The crew calls were well attended with all arriving a good twenty minutes before starting the day’s work on studio floor. The planning of all the elements involved filled the time allotted with no overtime.

How important is it to preserve the history of TV and Radio listings ?

Your new site is a huge resource nailing down historic transmissions. I looked up the details regarding Dr. Who's first transmission which was on the Friday night after President Kennedy’s assassination on November 22nd 1963. This meant viewers were drawn elsewhere. They re-transmitted that first episode the following week.

Have you spotted yourself in any of the listings? Have we stirred any particular memories that you would like to share? On our 2nd birthday we would also like to thank all of the volunteers who have helped make BBC Genome better by editing the listings, and those who have taken the time to write to us with their stories.