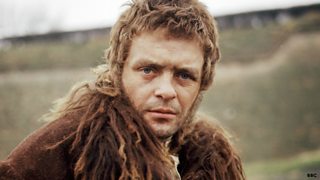 Anthony Hopkins broods as Pierre Bezuhov in the 1972 War and Peace. This look was all the rage at the time.

The success of the current production of War and Peace on BBC One made us think of all the other adaptations of classic Russian novels which have been featured on the BBC over the years.

There has of course been no shortage of adaptations of novels on radio and television, but for some reason Russian ones have a particular attraction – I suppose there is a touch of the exotic about a country that straddles Europe and Asia, that is like us and yet not.

War and Peace was first adapted for BBC TV in 1972, in a 20-episode version by Jack Pulman (who also dramatised I, Claudius in 1976, and Crime and Punishment in 1979).  The lavish production was broadcast on BBC2, part of the long running strand of classic adaptations on the channel.

The cast was headed by Anthony Hopkins as Pierre, and Morag Hood as Natasha, who proved to be a controversial choice in a notoriously difficult role, as she was relatively unknown.  Other well-known faces included Rupert Davies (of Maigret fame), Alan Dobie, Joanna David, and a young Colin Baker in one of his first television parts, as Anatole Kuragin.

The battle scenes were impressively realised, filmed on location in Yugoslavia, and involved borrowing a contingent of the Yugoslav army to act as the various Napoleonic-era armies.  BBC Visual Effects designers provided numerous explosions and dismembered corpses, and a huge array of costumes and props had to be found.

As tribute to the pains taken all round, a Radio Times special was published (one of several issued to tie-in with prestigious series in the early 70s).  The first showing of the production was also plugged in a special preview programme, and a documentary about Tolstoy.  In 1975 the serialisation was re-edited into nine feature-length episodes for a repeat showing in the summer months.

This production was preceded by only a couple of years by another 20-part version, this time on Radio 4, starting on 30 December 1969.  The first dramatised version was during the Second World War, beginning on 17 January 1943, where it was broadcast in eight hour-long episodes.  Its stars were Leslie Banks as Pierre and Celia Johnson as Natasha. 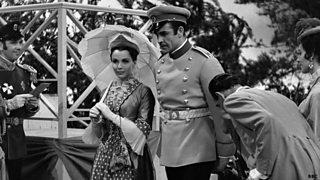 Sean Connery tries out the painstakingly authentic Russian accent he will later use in The Hunt for Red October.

Tolstoy’s other great work Anna Karenina, like War and Peace, was first broadcast as a radio drama, with versions in 1947 and 1958.  It was made into a 1961 television play, produced by Rudolph Cartier (of Nineteen Eighty-Four and Quatermass fame).  A pre-Bond Sean Connery was cast as Vronsky, with Claire Bloom as Anna.  Television revisited the novel in 1977, in a 10-part classic serial dramatised by Donald Wilson (who had The Forsyte Saga among his credits).  The leads here were Nicola Pagett and Stuart Wilson.  As with a number of BBC dramas of the 70s, there was an exhibition of the costumes at Longleat House.

Among the work of other Russian writers, Dostoevsky’s Crime and Punishment was dramatised by Jack Pulman in three episodes in 1979, starring John Hurt.  It had first been broadcast as a television play in 1953, with Kenneth Griffith in the lead, and the most recent television production was aired in 2002, with John Simm as Raskolnikov.  Radio versions were broadcast on Radio 3 in 1975 in the World Drama strand, and in 2000.  A different take on the story was presented in the David Farr play Crime and Punishment in Dalston in 2002 on Radio 3.

The Brothers Karamazov, another of Dostoevsky’s novels, was the subject of an early BBC2 serial in 1965, in the days when many of such productions were made in the BBC’s Glasgow studios.   Ironically they could not be seen in Scotland, as BBC2 did not start transmitting there until 11 June 1966.  This production sadly no longer exists, apart from a clip which was used in a feature on Dostoevsky in the BBC2 arts series Review in 1971.  Two different dramatisations of the novel were heard on Radio 4 in 1989 and 2006.

Dostoevsky’s The Idiot was also produced for BBC2 in Glasgow, and was shown in early 1966; it was also adapted for Radio 4 in 1978 and 2002.  His story The Gambler was adapted in a two-part version by John Hopkins, in an early colour production on BBC2 in February 1968.  Another version was made for the Open University in 1980.

Among other Russian novelists of the 19th Century, Turgenev is best known for one of his plays, A Month in the Country, but also wrote novels including Fathers and Sons, adapted for radio in 1950, and the source of the play Spring at Marino which was televised in 1951.  BBC2 mounted a four-part adaptation in 1971, starring Anthony Bate, and there was a further radio production in 1980.

Adaptations of works by Gogol include his short story The Overcoat, which was originally dramatised for the Empire Service, repeated on the National Programme in February 1938.  The first television production of a Gogol story was The Gamblers (not to be confused with Dostoevsky’s The Gambler), adapted as a farce by Harold Bowen in 1939.  There was another version of this in 1952, with the action transferred to Cork. 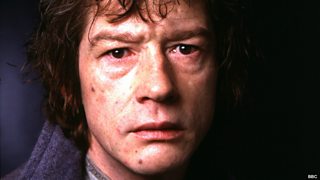 The War Doctor, sorry Raskolnikov, as played by John Hurt in the 1979 Crime and Punishment.

There have been other adaptations of these and other works by the same and other Russian authors, as well as productions of Russian plays and readings of novels and stories.  As mentioned at the beginning, there is a certain fascination with Russian literature, perhaps second only to French among the non-English speaking countries, which is a testament to the country’s artistic heritage.

Adapting novels - especially foreign works - for broadcast is a specialised skill.  Not every television writer possesses the skills needed, which include elements of literary appreciation and criticism, as well as the ability to write compelling drama.  But the way in which the ethos and atmosphere of a great novel can be interpreted into a script is not an inflexible technique. Obviously the mass of information in a novel is in the form of prose, and words have to be changed into pictures.

The craft of the adapter is to preserve the flavour and mood of the original work, as well as the plot and dialogue.  However it is a rare adaptation that does not take some liberties with the source text, and it has to be remembered that a film, television or radio version is not the same as the original material, nor should it try to be.

Andrew Davies, who adapted the current version of War and Peace, of course has a track record going back over 20 years, after a successful career writing original television scripts such as A Very Peculiar Practice.

Like his predecessor Jack Pulman, he is able to create compelling popular television from the source novel he’s working on, but does it in an arguably more radical way – he is reported as having torn a copy of the novel in two, partly for ease of use, but also to make the gesture that he was not going to be constrained in the way he adapted it. Of course in the case of foreign language novels there is the additional filter of the translator, and not surprisingly it is very rare for that function to also be performed by the adapter.

Adaptations of classic novels have come, gone and returned as a popular inspiration for television and radio drama.  When BBC2 began in the sixties there was a conscious attempt to tackle material that had been neglected. There had previously been a tendency for classic adaptations to concentrate on English novels such as those of Dickens, Jane Austen and Trollope, with very little adventurous material.  Every so often producers rediscover the attractions of the classics, and they are reinvented for a new age with appropriate fanfares.

There is an argument that adapting the classics brings them to audiences who would not have considered reading the novels, and might now be tempted to.  Alternatively, people will at least have some idea of the content and themes of a novel by having seen an adaptation.  At another level, these programmes involve stories with great characters, and there is the opportunity to bring a historical era to life.  That can be educational or escapist, depending how you take it.

What do you think of historical novel adaptations?  Do you have a particular fondness for Russian works, or prefer a Dickens or an Austen?  Would you prefer something grittier, modern and British? Let us know in the space below.