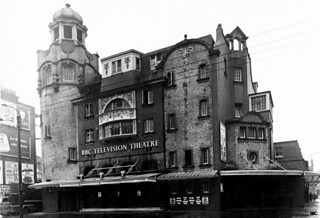 The Television Theatre in 1955, soon after the BBC acquired it.

When you’re watching or listening to a programme, how aware are you of where it is being made?

While the source location of most programmes is irrelevant to their enjoyment, there are some studio locations that have been made a feature of in programmes.  One site that has had more prominence given to it than others is the BBC’s Television Theatre, originally the Shepherd’s Bush Empire theatre.

Built in 1903 by celebrated theatre architect Frank Matcham, the Shepherd’s Bush Empire was a popular variety theatre played by many of the top names in showbusiness up to the early 1950s. The rise of television and radio began to chip away even at cinema attendances in post-war Britain, and had an even more detrimental effect on theatres, where the once-thriving variety circuit began to fade away.

Part of the great Moss Empires organisation, the Shepherd’s Bush Empire was no longer paying its way by 1953 when the BBC took it over as a ready-made venue. It was near to its Lime Grove studios and a short distance from the building site on Wood Lane that would one day become Television Centre.

BBC TV was gradually expanding its output, reaching more of the country and needing more production capacity.  Austerity era spending meant that work was going very slowly on TVC, and Alexandra Palace was no longer adequate.  Its two tiny studios were soon to be dedicated to News broadcasts, with the first live television bulletins starting in July 1954, and experimental colour transmissions in 1956.

The size of Alexandra Palace’s studios and Lime Grove’s range of odd-sized studios and maze-like interior made it difficult to present shows like variety and comedy with a studio audience.  The Empire, however, was a purpose-built theatre with existing seating.  The fact that this venue was capable of taking an audience encouraged more such shows to be made, and it’s notable that staples such as Crackerjack and the television version of The Billy Cotton Band Show began after the new studio became available.

The first programme to come from the BBC Television Theatre, as the Empire was renamed, was Variety Parade on 24 October 1953.  Fittingly, the show featured a full variety bill, headlined by Max Bygraves and singer Eve Boswell, with supporting acts including the up-and-coming comedy double act Morecambe and Wise.  Also appearing was Ernest Maxin, who the following year directed Running Wild, Morecambe and Wise’s ill-fated first television series, at the same location. 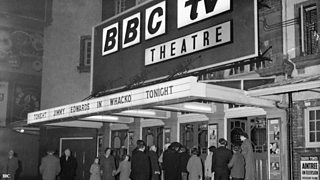 After its first revamp, the Theatre hosted such shows as Jimmy Edwards' Whacko!

At first, Television Theatre productions were made as outside broadcasts, with mobile equipment brought in as if covering a live theatre performance.  Spare cameras from Lime Grove studios were installed shortly afterwards, but for several years outside broadcast staff were responsible for operating them.

In May 1956 the first of two major upgrades took place, and the venue was closed down while improvements were made.  The King’s Theatre in nearby Hammersmith was used instead (it had also been under consideration when the BBC had purchased the Empire), and was also known as the Television Theatre during this time, as in the billing for a November 1956 Vera Lynn show.

The Empire's stage was extended to enlarge the studio floor, and the building was now treated as a normal studio, with crews shared with Lime Grove and, from 1960, Television Centre.  While not every programme made at the Television Theatre is billed as such in Radio Times, it is noticeable that a fair number were, so the novelty of a real theatre being used was obviously seen as a selling point.  The atmosphere and trappings of the old building gave a certain gloss to productions, and there was an intimacy to the place that other more functional TV studios lacked.

Many classic 1950s and 1960s series were produced there, including What’s My Line, the Black and White Minstrel Show and This is Your Life, as well as one-offs like Sports Review of the Year and the Ivor Novello Awards.  Crackerjack made a feature of the venue by showing frequent shots of the audience, when they had to shout back “Crackerjack!” whenever the cast mentioned the show's name.

This is Your Life also featured the building, often showing its subject being led through the stalls to the stage,  and in a 1964 edition featuring Barbara Mullen, she was shown arriving outside in a vintage car with fellow Dr Finlay’s Casebook stars Bill Simpson and Andrew Cruickshank, before being surprised by host Eamonn Andrews with the famous red book.

In 1968-69 the Television Theatre received its second revamp, and the BBC took on the Golders Green Hippodrome as a temporary replacement, the King’s Theatre having been demolished in 1963. This time an extension was built onto the right hand side of the building to house new production facilities, and the studio was converted to colour production. 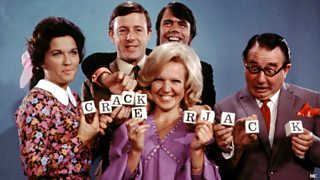 The Crackerjack team spell it out in 1968. 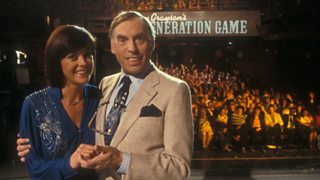 Isla St. Clair and Larry Grayson - the audience is behind them all the way. 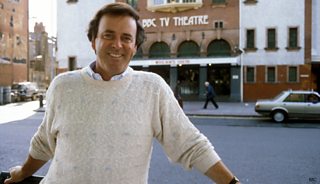 Terry Wogan celebrates his successful show from the safety of Shepherd's Bush Green.

The 1970s were indeed colourful years, and the Television Theatre was home to hit shows such as The Generation Game (hosted first by Bruce Forsyth, then Larry Grayson), Basil Brush, and That’s Life.  Many personality-led variety shows also came from the venue over the years, starring the likes of Cliff Richard, Max Bygraves, Cilla Black, and Val Doonican.

A memorable incident in the life of the building came in 1974 when the Osmonds appeared there as part of a week-long visit to the UK, where they had daily shows on the BBC (including guest-presenting Top of the Pops).  Their concert appearances at the Theatre saw it besieged by fans, a memorably scary experience for even the most hardened BBC staff on duty.

The Osmonds were by no means the only pop or rock music act to perform at the Television Theatre in its BBC days.  From 1975 the Old Grey Whistle Test, stretching its wings from its original cramped presentation studio in Television Centre, began to use it as a concert venue.  The first act to appear was The Jack Bruce Band, and regular concerts followed every few months until May 1979, with one final outing in 1981.

Music of a different kind had often featured at the Television Theatre in the form of A Song for Europe, where contenders for the UK’s Eurovision Song Contest performed.  The presenter of many of these shows was Radio 2 disc jockey Terry Wogan.

Terry Wogan had had a few try-outs as a chat show host from the 70s onwards, his first stint being on ITV, but in 1982 the slot vacated by Michael Parkinson on Saturday nights was given to him, and his show was an immediate success.  In 1985, the new head of BBC One, Michael Grade, with his experience in both ITV and US television, decided Wogan was the ideal choice to present a three-nights-a-week show on the channel.

This show too proved highly successful, and Wogan often drew attention to the fact that it was coming from the venue on Shepherd’s Bush Green. Terry’s interviews included classic television moments, although some guests could find the pressure of a live interview challenging, including a monosyllabic Anne Bancroft. He was always able to cope, and with a thirty-five minute show there was never too long to wait to escape from an interview that was going awry.

The deceptively small stage at the Television Theatre suited Terry’s interviewing style, and while clever camera work was able to make the studio appear larger, it seemed to lend itself to the intimate relationship between Terry and his audience that was such an important part of his appeal.

In 1991, the BBC relinquished the Television Theatre, with Terry Wogan presenting the final show there on 24 July 1991, looking back over its BBC history.  In due course it gained a new life as a popular music venue, the O2 Empire –  not so different from its days as a venue for the Old Grey Whistle Test concerts, and its early history as a variety theatre.

Other than specially built complexes such as Broadcasting House and Television Centre, the BBC has often made use of existing buildings which have been adapted to its own needs, and incidentally given new life to places that might otherwise have vanished.

While Lime Grove Studios sadly proved in too bad a state of repair to have a future after the BBC left, the Shepherd’s Bush Empire, aka the BBC Television Theatre, is still with us – and hopefully will be for many years to come. 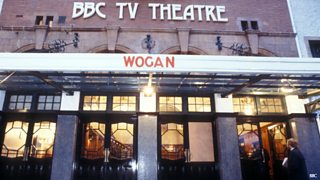 The Wogan show was a fixture at the Television Theatre in the 80s... 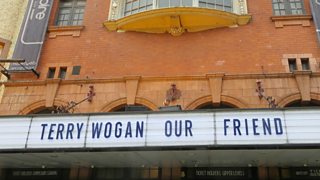 ...And he is not forgotten at the venue today.

Were you aware of where programmes such as Wogan were broadcast from? Were you ever in the audience at the BBC Television Theatre?  Do you win a Crackerjack pencil?  Search Genome for programmes from the legendary venue and let us know your thoughts in the space below.