The wait was over for Shinty players and fans alike on Saturday as the 2013 shinty season got well and truly underway.

With a full fixture card and glorious sunshine, supporters and clubs across the country pulled their respecive colours over their heads and took to their battle grounds across Scotland.

The start of a new season in sport is always an exciting time and with shinty is no different. With a period of around five months off and no competitive games, letting your hair down and eating lots of unhealthy food is easy. Getting back fit and in shape after the festive period is a different story altogether. 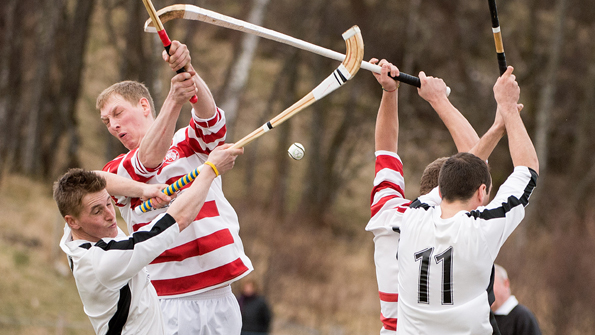 With most clubs starting pre-season training and preperation in early January, it's a welcome relief when the first weekend in March finally comes around to greet you.

There's a whole different kind of greeting when running about in the wind and rain on a cold Tuesday in January thinking you're still a month and a half away from the start of the season and looking five months pregnant!

Not everyone however is happy at the start of this season, in fact there are very few in the hierarchy of the sport!

The Camanachd Association has announced that at the end of this season two Premiership clubs shall be relegated as a new National Division 1 league is reinstated.

This will effectively mean no promotion for either North or South Division 1 champions this year, and the Premiership will be reduced from a 10 team structure to eight. It would appear the powers that be at the Camanachd Association are in favour of fewer games for clubs at the top of the sport as this was not put to a vote, but agreed by the board of directors at the Camanachd Association.

However, this could all change as it is to be challenged at the next AGM which takes place towards the end of April, but many feel already that it could be another kick in the "shinty balls" to u-urn on a decision seven weeks into the current season.

This will be an ongoing concern and topic of interest over the coming weeks as each club won't know fully what they are playing for this season until it's 100% confirmed then.

So what are your thoughts on the Camanachd's decision regarding this subject?
Do you think it is a good idea? What are the pros and cons for your club, or shinty as a whole that you can see if the decision is finalised?

Now to the shinty itself.

Champions Newtonmore got their season off to a flying start with a 3-2 win over Glenurquhart. Under new management, Paul John (PJ) MacKintosh hopes to lead Newtonmore to their fourth successive league title.

In my opinion unless Kyles Athletic can travel with a full squad from Tighnabruaich all season, I can't see anyone upsetting this pattern.

Ironically, only a few years ago just three miles up the road from Newtonmore, it was Kingussie who dominated the league as the rest battled for supremacy.

Fort William opened their season with an away trip to Inveraray also under new management, ex-Scotland internationalists, Victor Smith, and Adam (Addie) Robertson.

Having lost further players throughout the winter months to work, women and wine, Fort are really having to bring their youth system into fruition a little earlier than first anticipated. It was Inveraray who took both points with a 1-0 win, with co-manager/player Garry MacPherson netting the only goal of the game.

Lochaber played their first ever Orion Group Premiership fixture at home on Saturday and took a point from a goalless draw with Lovat. Scotland International Sean Nicholson had the chance from the spot to take both points for the Spean Bridge men who found the Lovat keeper's feet in fine form to deny the win.

Kyles Athletic secured both points with a 3-1 win over South promotees Oban Camanachd, while Kingussie took both points away to Kinlochshiel with a 4-2 victory.

Fort William have home advantage over Kinlochshiel at An Aird. This will be Kinlochshiel's first visit to An Aird in the Premiership, as last year played at Fort's interim field "the Black Parks". Both clubs will be extremely eager to get points on the board having both lost their opening fixture.

My name is Gary Innes and I play shinty for Fort William and Scotland. When not swinging my caman on the field, I play traditional music for a living and travel widely up and down the country to accommodate both passions. I'm looking forward to sharing my thoughts, and hearing from you on Scotland's oldest and wildest sport: shinty.

You can stay up to date with Gary Innes via these feeds.