If you could bet on shinty at the bookies, then their would have been a few skint fans on Saturday evening.

Not one team managed to capatalize and take both points with home advantage, and there were two shock results in particular.

The Drumnadrochit men have been getting coaching tips and help from Scotland boss Drew MacNeil, and it's clearly starting to work.

Kyles Athletic took off for Inveraray and stormed ahead 3-0 through Dunky Kerr, Roddy MacDonald, and Fraser MacDonald, before 'Rary' managed to find the net. 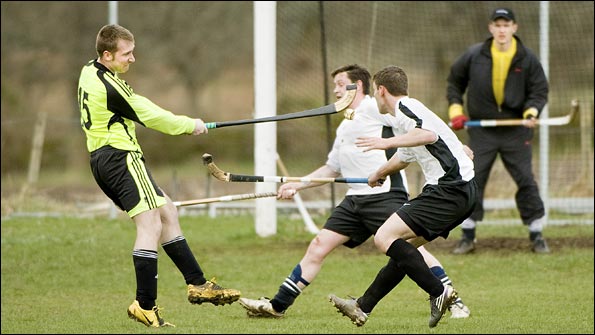 David Robertson and Ewan MacMurdo got themelves on the scoresheet for the home side, but just couldn't find another to salvage a point, Kyles winning 3-2.

Kilmallie got their first two points on the board when they beat Glenorchy 3-1 at the Mart Park.

A double from Liam MacDonald, and single for John Stewart was enough to seal the deal, with Grant MacPherson getting a late consilation penalty for the home side.

Many eyes were on the Oban-Kingussie game this week, after Oban beat Kings last weekend 2-1.

However, two goals from Kingussie's James Hutchison ensured both points headed north for the Badenoch side.

Our Fort William team went to Lovat in what most would have predicted fairly confidently as a Fort win. That, however, was not to be the case.

I should have known the day wasnt going to go as planned from first thing on Saturday.

When I was leaving from my folks' house, as usual I went to grab my bag from the greenhouse.

As I stepped out and pulled the door behind me it completely dislodged from its rollers, and the six-foot pane of glass came hurtling down on top of me as I fell backwards.

Thankfully, somehow I managed to escape unharmed, which is more than I can say for dad's greenhouse.

When we arrived at the ground and realised the TV cameras were filming our gamem there was all sorts of talk of goal celebrations and nonesense.

Unbeknownst to us then, Duncan Rodger's fishing celebration would have to wait for another day.

Fort started strongly and we were very close to opening the scoring when I hit the cross bar, and then Brian Simpson's snap shot whistled inches wide.

With a strong wind helping us, we bombard the Lovat goal in the first half, but their young defence dealt with everything we threw at them.

In the second half we made a couple of changes, and I was pushed up front.

The next 45 minutes became a personal battle between Fort's forwards and the Scotland under-21 keeper, Stewart MacDonald.

He pulled off save after save, and when we finally did manage to beat him, we were denied by the woodwork once more.

Lovat also had a couple of chances, especially towards the end of the match, but they were also met by fine keeping at the Fort end.

This was a fine display and effort from a club which hasn't started this season as well as they'd hoped.

However, if Lovat can continue to find the spirit and shinty that they displayed on Saturday, many more points will be dropped at Kiltarlity this year.

Well done to Skye Camanachd, who announced on their website that Fort William, and local rivals Kilmallie, were in talks about merging to form a 'super club' called, Fort Mallie.

This, of course, was an April Fools joke, but when unaware Fort chairman, Richard Gall was quized about the article, he squealed "Over my dead body!"

This Saturday witnesses the start of the first round of the Sutherland Cup and a little part of history.

This is one of Shinty's oldest trophies, and this year will celebrate its 150th anniversary.

Aberdeen will host this amazing competition's final on 30 July, and I believe this will be the first time that a major shinty final will been contested on the east coast.

Looking ahead to this weekend's Premier League action, many supporters will be heading up and down the A9 to watch the "Battle of Badenoch" between Newtonmore and Kingussie.

Will Newtonmore bounce back after last weekend's defeat, or will Kings manage to stamp their mark back on the league?

One thing's for sure: she will be a cracker.

Fort William have a huge game at An Aird also, when they take on league leaders Kyles Athletic.

Kyles are the only team not to have dropped a point yet, and have scored 25 goals in their first 4 games.

Fort, though, have not conceeded a single goal, but this statistic is sure to be put to the test.

Safe travels to all clubs, and remember, be careful when shutting your greenhouse doors.

My name is Gary Innes and I play shinty for Fort William and Scotland. When not swinging my caman on the field, I play traditional music for a living and travel widely up and down the country to accommodate both passions. I'm looking forward to sharing my thoughts, and hearing from you on Scotland's oldest and wildest sport: shinty.

You can stay up to date with Gary Innes via these feeds.