I generally don't consider a bug that eats a plant to be wicked. Plants are, after all, the food supply for many insects; I'm hardly going to blame them for eating their dinner. No, a wicked bug is one that has caused catastrophic, widespread suffering, or inflicted pain and disease and misery on us. Mowing down the lettuce or boring into the melon vines is nothing in comparison to the assassin bug that bit Charles Darwin, the giant centipede that terrorized a Londoner , or the Brazilian wandering spider that bit a pub chef.

And yes, I'm using the term "bug" loosely to refer not just to insects, but to a variety of creepy, crawling, and slithering creatures that infest not just our gardens, but our nightmares as well.

So for the most part, I'm at peace with my bug-ridden garden. But even ordinary garden pests can be terrifying in their own way. Consider the following: 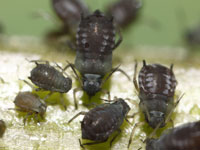 Many species of aphids are capable of "telescoping generations" in which a female gives birth not just to her daughter, but her granddaughter as well. Like Russian dolls, one is nested inside the other. Females can carry on like this for several generations with no male involvement at all. This explains why you never seem to see just one or two aphids: their reproductive advantage lets them take over with remarkable speed. What's worse is that some, such as the oleander aphid Aphis nerii, actually gather poisons from their host plants and pack them around their young to protect them from predators. They may be tiny, but they are fierce and determined.

The ermine moth caterpillar Yponomeuta padella, is a horrible creature that covers trees and fences with tent-like webs. We have similar species called tent caterpillars in the U.S. and we have a fine old tradition of climbing up on ladders with flaming torches in our hands to set fire to them. Please don't ever do this. Setting a tree on fire is far more dangerous than simply letting the caterpillars run their course. 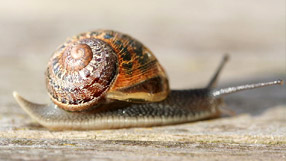 Gardeners here in North America regret the day the brown garden snail was imported from France as a food source. (Were we ever really that hungry? Hadn't we invented the hamburger by then?) Fortunately, we have an ally in our war against the snail: the lancetooth snail Haplotrema vancouverense is a predator, so if both are found in the garden, we can step back and let them battle it out. I know that the decollate snail Rumina decollate, native to the Mediterranean, serves the same purpose. We're starting to import them to California as well. What could possibly go wrong?

Grape Phylloxera might not infest your garden, but it is a plant pest worthy of the term "wicked": this tiny, aphid-like creature hitchhiked to France in the roots of native American grapevines, which were resistant to the pest. The French grapevines had no such resistance, and this miniscule creature wiped out the vineyards and made wine all but impossible to get in the mid-nineteenth century. Terrifying indeed.

Amy Stewart is a California-based garden writer and blogger.