Darwin may have been fascinated by the way that earthworms manage to pull leaves down into the soil, but sadly they don't manage to work on a fast enough timescale to prevent falling leaves from causing problems in autumn.

Not only will a carpet of leaves bleach patches of the lawn and clog up the pond, but once leaves start to disintegrate on the hard landscaping we have to worry about Aunty Mabel slipping over when she pops out to refill the bird feeder.

Fallen leaves aren't all bad, though - with the help of those earthworms and other soil organisms they break down and feed the soil, and while they're doing so they form a protective layer that prevents winter weather from ruining the soil structure and leaching away all the nutrients. They also provide a top-notch wildlife habitat when they pile up in drifts and under hedges.

Where they won't cause any problems we can safely leave fallen leaves where they are, but while you're raking up the ones that have to go you can do your garden a big favour and turn them into leaf mould rather than throwing them away.

Leaf mould is just compost made entirely from fallen leaves, and making it is a very easy process. Simply pile up leaves in a heap, or create an open-sided cage of chicken wire if you'd like to keep them slightly neater. 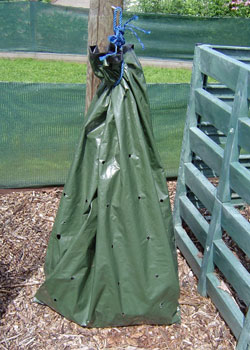 In an urban garden it pays to rake them into plastic sacks, tie the tops, poke a few holes in the side and then leave them behind the shed. After a year you'll have something that looks like slightly older leaves. A year later you'll have something approaching chunky compost that makes a lovely soil improver. Use it to mulch around shrubs and trees or to cover bare soil in the winter.

If you have the patience to wait another year, you'll have lovely soft compost that's ideal for sowing seeds and can be used as the base for your own free and peat-free potting mixes. That's the Slow Composting version.

Raking leaves by hand on a beautiful autumn day sounds like a lovely way to pass the time, with the delayed gratification of compost in a year or two. But if you're short on time and want to turbo-charge the process a little bit then spread your collected leaves on the lawn, raise the mower blades and use it to chop them up (leave the collection box on and you won't have to rake them up twice). Chopped leaves rot down a bit more quickly, but the end product is just as virtuous.

So this autumn don't see collecting fallen leaves as a chore, see it as community service - you'll be basking in the silent thanks of your plants, your soil, those earthworms and (of course) Aunty Mabel.

Emma Cooper is a garden blogger and author based in Oxfordshire. She advises the public on home garden composting as a Master Composter, under a scheme run by Garden Organic to encourage recycling, cut waste and improve our gardens.