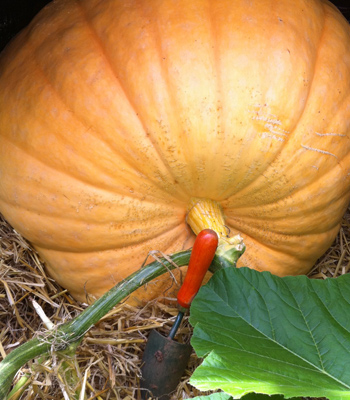 Growing a giant pumpkin isn't for slackers. I've been kept very busy on my mission to beat my effort last summer - an 18 and a half stone squash which came a respectable 7th in a national pumpkin competition. You have to water every day and feed with a high-concentrate liquid tomato fertilizer at least three times a week to keep it putting on the pounds.

Even the flesh needs care otherwise it can be scarred by its own bristly stems and start bleeding precious sap which inevitably compromises the eventual size.

So when the gourd was about the size of a football I lifted it from the soil and sat it on a deep bed of straw and keep it topped up as she sprawls ever wider.

'Priscilla Pumpkin', 'Priscilla' as she is known to friends, family and her mates on Twitter (@PriscillaPumpk1 - she now has 35 followers!) has 40 days of growth under her belt since setting, and is now swelling so fast that I can actually see the difference in size between the morning and afternoon. Her 108in circumference is bigger than a beanbag and I reckon she weighs about 300-plus lbs. In fact, she is getting a little out of shape, sagging out in all directions, like Jabba-the-Hut.

One scorching day, I noticed the skin was sweating with tiny beads of water forming all over the rind - which is quite normal for pumpkins. Losing water though is bad news, as it means it's getting smaller not bigger. I quickly rustled up a shade-tent, which I made from a piece of weed-suppressing membrane and supported on bamboo canes and this seems to be working to keep everything nice and cool. 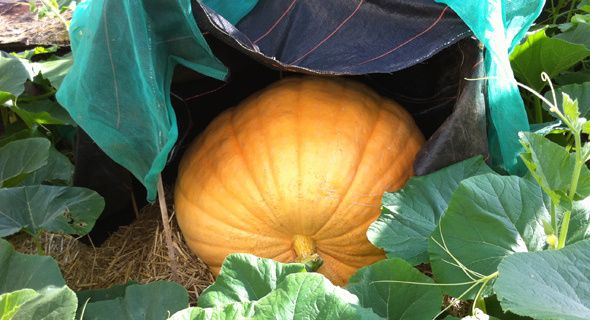 Last year I grew my giant pumpkin outside in the open so in an attempt to beat my own record, I sowed the 2011 model in one bay of range of Victorian glasshouses. The foliage from one seed - the progeny of a previous prizewinner called Patten 10 - now covers 15x5m.

Incredible bristly green stems swamp the floor, the paths and are even growing out the vents - all in less than 100 days. I've got a long-handled tree pruner for keeping it in bounds - it's great as I can reach right into the heart of the jungle of leaves without crushing the stems under my boots. You should let only one fruit set so that all the energy is channeled into your potential prize-winner, so I also snip off any rivals at the same time.

If you leave too much crossing foliage, it's only a matter of time before the fungal disease, powdery mildew takes hold making the leaves look as if they've been dusted with talcum powder. While it won't kill the plant, it does slow growth dramatically as it can't process as much sunlight. If yours get mildew, keep snipping out affected leaves, water and feed - but keep the foliage dry to stop it happening again.

Even if I wanted to, I wouldn't be able to lift Priscilla Pumpkin up now and besides she's far too hefty to sit on my bathroom scales. I'll have to wait until it stops growing around October-time and get it to weighbridge to ascertain its bulk.

The world record is currently 1725llbs. There is a way to get a rough idea of how heavy the pumpkin is using a weight chart. It's quite simple and pumpkin aficionados tell me it's surprisingly accurate - all you do is measure the circumference at the widest point and then check against the predicted weight in the chart.

Mine with its girth of 108in has a guesstimated 306lb and with another fifty or so of growing days still left this summer I reckon I'm well on the way to crossing the 1000lb (72 stone mark). That's one hell of a Halloween lantern!

Toby Buckland is a garden writer and broadcaster.