Let's hear it for the posy-pickers 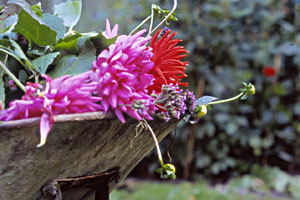 I ask scores of other very ordinary gardeners about it, and we all seem to agree:  we simply can’t bring ourselves to ‘spoil’ our gardens by picking flowers from them for the house.

Well - that’s not strictly true: most of us habitually trawl through our borders to tweak out a little sprig of this, a stem or two of that, a pretty seed head from here, a cluster of bright berries from there, all garnished perhaps with a snippet or two of evergreen foliage.

In twenty minutes flat we can pick ourselves a perfect posy, a little floral record of that particular day in the garden. Stuffed into a jar teetering amongst the disorder on my desk or, somewhat more aesthetically resplendent on the kitchen table, these little concentrated bits of gardener’s delight can be particularly appreciated on rainy days when closer inspection of the real thing is tricky.

But raiding borders for our poshest flowers for a great big blistering in-yer-face bouquet would be unthinkable.  The entire, fabulous tableau of our gardens has to stay right where it belongs: outside.

It isn’t just about space.  Even when I had lots of it I didn’t create a by-then almost de rigeur, full-blown cutting garden. Constantly under pressure (by then I was writing lots as well as tending a considerable acreage virtually single handed), the last thing I needed was more beds to tend, seedlings to fuss about and staking to do. 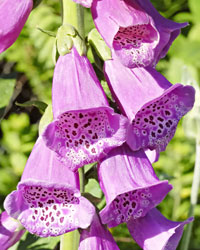 So the posy-picking habit continued, but with an added twist: an old battered galvanized watering can, artfully and carefully placed near my back door, became home to a changing population of what could perhaps best be described as Casualties of the Day –  lofty things that had tumbled after a gale or foxgloves that had almost run out of steam.  With a froth of hastily grabbed alchemilla, some lanky stems of bronze fennel or cow parsley from the orchard the can was (nearly) always stylish and I adored it: great big ‘cut’ flowers without any of the angst.

When writing my book on growing your own flowers, the publishers and I came to a compromise in the ‘The Cutting Garden’ chapter.  Why, I asked, should in a book with my name on the cover, include a subject so far from my heart, and one that had been so expertly covered by others?

Inevitably I toed the line and included the cutting garden basics (though those familiar with my writing style may detect in that section a certain lack of passion).

But I also suggested cut-and-come-again flowers for habitual posy-pickers and cut-flower wusses like me - and for those fellow gardeners who, I feel sure, simply don’t have the time and space for a pukkah cutting garden.

The list includes the following: sweet peas (of course) and their perfect posy-partner lady’s mantle (Alchemilla mollis), tall cosmos (C. bipinnatus), dill (Anethum gravaeolens), biennial wallflowers as well as shrubby ones (e.g Erysimum ‘Bowles Mauve'), and the more generous-flowering of the argyranthemums such as A. ‘Jamaica Primrose'.

Of the perennials, in my own garden neither astrantia nor Knautia macedonica misses a beat if sensitively, repeatedly plundered, while good old-fashioned pot marigolds (Calendula) are brilliant value too.

Helen Yemm is a garden writer, best known for her regular column Thorny Problems in The Telegraph.