Growing exotic plants in the UK 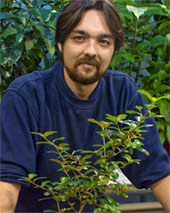 Nick Johnson is the team leader of the Temperate and Conservation collections at Kew's Tropical Nursery. Nick has been at Kew for nearly ten years and has worked in the Tropical Nursery for eight of them. Nick manages a small team that cares for the temperate collections and the increasingly important threatened island flora collections.

Someone asked me recently why I like growing exotic plants. Why not grow our beautiful British garden plants? There is such a range in the plants we can grow outdoors, why as a gardener do you find joy in working all your days in a glasshouse? Sweating buckets in the summer heat and struggling to find ways to coax plants through our dismal winters with little of the light they crave?

I took them into one of my glasshouses in Kew's tropical nursery where I work. This particular glasshouse produces all the plants destined for bedding displays in public houses such as the beautiful Waterlily House. On a potting bench one of the diploma students had just finished potting up seedlings of Mimosa pudica which many call the 'Sensitive Plant.' I didn't have to say a word! We just touched the open leaves and they closed up faster than you could say, 'Wow!'

After wandering through the lush green foliage and flowers (in January!), we came to the tropical pitcher plants Nepenthes. These plants will be planted in the Princess of Wales Conservatory. In particular I showed off a specimen of Nepenthes truncata with its other-worldly pitchers that are a foot long sprouting from the ends of their lush green leaves. Another 'Wow'; this time hushed and awed.

That's one of the things I love about all plants, native or exotic, they humble you with their complexity, their diversity. And for those of us in temperate zones, tropical plants can offer us a whole new range of interesting forms and colours.

Can anyone do it? Can we plant them outside? That's the thing I love about being a gardener, we can always try it. If it doesn't work, it's noted and we can try something else next year. British gardeners have always been at the cutting-edge of trying new plants outside.

A few weeks ago we invited you to send questions for Nick via the message board. Here are his answers to those questions...

Is it feasible to grow Loofah (Luffa cylindrica) in this country? Do we get a long enough growing season to harvest them? Would I have to start them indoors and move out later in spring?

Kind of like starting off your tomatoes indoors for an early crop, yes you'd have to get them going indoors. Sow them in February or March so you have nice strong plants to go outside. The big issue with using tropical and subtropical plants out-doors is making sure you put them into beds once the soil has warmed up after the spring; late May should be good. Make sure there is plenty of dark organic matter in the soil too, not only will it help retain moisture in the summer but it'll also help the soil stay warm. Dark soil absorbs heat much better than light soil. Make sure they get lots of sun in a south facing aspect and keep them well watered!

These plants can be tricky! It's not so much our temperatures that they don't like, it's our unpredictable rainfall. Many come from areas that have distinct rain patterns and will sulk or rot if they are cold and wet. You could get round this by protecting the bed with a cover over winter to keep it dry but this solution may be only for the enthusiast. There are some very nice Himalayan plants in cultivation here that do perfectly well in our climate, such as the beautiful Himalayan Blue Poppy, Meconopsis betonicifolia. There are some fantastic trees from Tibet - Taxus wallichiana, Magnolia officinalis and one of my favorites - Rhododendron arboreum to name but a few. You'd also be surprised at what grows on the steppes of Mongolia - amongst the grasses you'll find Geraniums, Gentians, Delphiniums and others that many consider to be British garden plants.

If a plant is totally hardy throughout the UK, does this make it not exotic, by definition?

We tend to think of exotic as meaning lush and green, tropical big leaves and unusual flowers. But by definition, exotic actually means anything that isn't classed as a British native. Look around your local park or in your garden, you'll find exotics a-plenty! Technically, Horse Chestnut (Aesculus hippocastanum) is an exotic. It was introduced from the Balkans in the 1600s. Who could imagine an English garden without 'English' Lavender? It was probably introduced by the Romans from the western Mediterranean around 2000 years ago.

Surely growing exotics is bad for the planet and bad for local fauna - is this the case?

If that were the case then surely we should get rid of most of the plants in our gardens! Exotic plants are only a problem if they can reproduce and out-compete our native flora. Invasive exotics such as the Himalayan Balsam (Impatiens glandulifera) and Rhododendron ponticum are examples of escapees from the garden and are a serious concern. But try to imagine life without the plethora of exotic flowers we have in our gardens that are completely benign. Always garden responsibly using your common sense and NEVER bring seed into this country from overseas without careful research and permits from the UK government and the country of collection.

I have often fancied growing a lemon tree but am worried about having to bring it inside each winter. What happens when they get too big to move? Are there any varieties which stay small enough to move in and out of a conservatory?

Don't worry too much about having a lemon tree that gets too big as there are many varieties on the market that have been grafted onto a dwarfing rootstock. Just make sure they are on the dwarfing rootstock 'Flying Dragon'. These trees only get up to around 6 foot tall after 10 years and will never be too difficult to move. Keep the plant constricted in as small a pot as you can fit it into. This will dwarf it even further. My top tip for moving containerised trees around? Let the compost dry out a little before you move them. If they are outdoors, cover the pots with a plastic bag to keep the rain off them for a while and make sure they are not sitting in pans full of water!

Many people asked about plants which appear dead but when dug up show signs of life. Plants mentioned include: Phormium, cordylines, Llomartia ferruginea, Paulownia. How do you care for them?

Patience... don't forget that your garden is a part of nature. Sometimes plants die back to protect themselves from the ravages of the weather. Some trees will drop leaves or even whole limbs to compensate for a lack of water. Get to know the species you are growing, how they grow and find out where they are from and the environment they evolved to cope with. For instance, Phormium tanax comes from low lying areas in temperate New Zealand and can be susceptible to hard frosts, but even though the leaves can look black, most of the time they'll sprout again from the base and grow back fine. Don't be too hasty too dig them up! Wait until early summer just to be sure. It's tempting to fuss over the plants in our gardens too much. Relax... take the time to observe and don't panic if there are times where your garden can look a bit of a mess. A wise man (Benjamin Disreali) once said, 'How fair is a garden amid the trials and passions of existence.' How right he was.