This is the price one single bulb of Galanthus plicatus 'E.A. Bowles' fetched at the hotly-contested Galanthus Gala last year. On internet auction sites, too, prices regularly reach £80, £90 and in one celebrated case £265, for a single specimen of the rare G. nivalis 'Flocon de Neige' bought in 2008.

Britain, it seems, is in the grip of galanthomania: a craze for snowdrops. Specifically, very rare snowdrops: those only available, very occasionally, from private collectors. Over the past five or six years the prices galanthophiles are willing to pay for the rarest bulbs have been rising and rising, and with just one or two growers supplying the most sought-after varieties the trend seems set to continue.

Joe Sharman, galanthophile and owner of Monksilver Nursery in Essex, runs the annual Galanthus Gala, attended by about 300 people from all over the world. Here are his top five most covetable snowdrops - the ones which regularly reach three-figure prices at auction. Find one of these beauties in your garden and you may have struck gold. 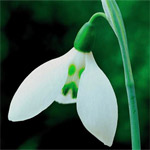 Galanthus elwesii 'Grumpy'
Value: has reached over £100 online
The flowers are beautifully shaped but it name derives from the markings on the inners which resemble a miserable face. It's always popular, and often bought as a funny present for someone with a reputation for being a grump!

Joe found this sweetly scented snowdrop himself, in a naturalised population in an old Cambridge garden in 1990. It's a tall, vigorous snowdrop, flowering mid-season, and has grey-green leaves, though it can be slow to increase. 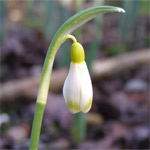 Galanthus nivalis 'Ecusson d'Or'
Value: about £50 but has reached £160 online.
This unique variety was the first yellow-tipped snowdrop, and was found by Mark Brown in France in 2004. The name translates as Shield of Gold and is the name of the hamlet where the bulbs were found.

Green-tipped snowdrops are relatively common but when this one appeared at an RHS show everyone was astounded. The ovary and all six of the petals are yellow-tipped on mature bulbs but smaller bulbs in each clump can have white outer petals. The plant is relatively tall and surprisingly vigorous, flowering mid-season. 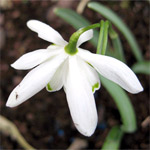 Galanthus nivalis 'Flocon de Neige'
Value: around £100 but has reached £265 online.
This amazingly beautiful snowdrop was found by Mark Brown in Buckinghamshire in the 1980s. The name translates as snowflake, which couldn't be used as it is the common name of Leucojum - so Mark ducked the issue by naming it in French.

A double form of the common snowdrop, with six perfect outer petals producing a really attractive flower. The green-tipped inner petals are often arranged in symmetrical ranks unlike most of the other doubles.

It's a dwarf variety, flowering mid to late season, and needs frequent division to keep it flowering well. 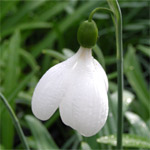 Galanthus plicatus 'E. A Bowles'
Value: around £150.
Found in 2004 by Michael Myers in the garden of the famous plantsman, E A Bowles and named for him. In the long run this is going to be one of the most popular varieties grown.

It's a superb snowdrop, one of the best ever found, with six large pure white petals. Spectacularly vigorous, often having two flowers per bulb and flowering even on small side bulbs, flowering relatively late in the season. It also has broad blue-green leaves with folded edges. Other poculiform varieties had been found but none had survived. 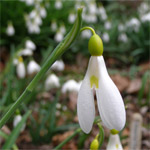 Galanthus plicatus 'Madelaine'
Value: about £25, but has fetched up to £60 online
Joe found this yellow snowdrop in 2002 and named it for his niece. It has yellow-tipped inner petals with a greenish-yellow ovary. It's one of the most vigorous of the yellow snowdrops, flowering mid-season, with greener leaves than many of the others: the strength of the yellow colour can vary considerably depending on the soil type. The leaves have folded edges. Only four other yellow varieties of this species have been named.

This year's Galanthus Gala is on Saturday 12 February in Brackley, Northamptonshire: though it may be advisable to leave the credit card at home....